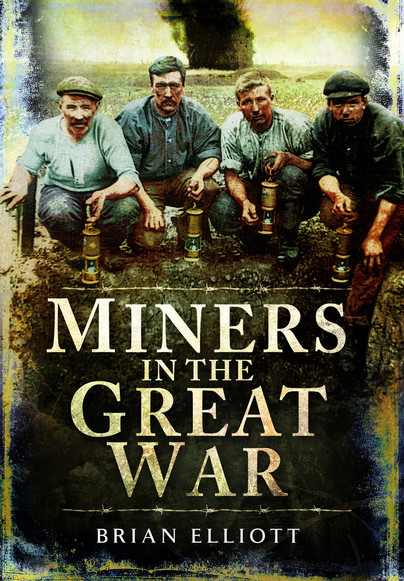 Miners in the Great War (Hardback)

Preorder
Add to Wishlist
You'll be £15.99 closer to your next £10.00 credit when you purchase Miners in the Great War. What's this?
+£4.50 UK Delivery or free UK delivery if order is over £40
(click here for international delivery rates)

At the outbreak of the Great War in 1914, despite many difficulties and falling manpower, coalmining was the most important industry in Great Britain. It employed around a million persons in well over 3,000 pits ranging from small hillside drift mines with a few hands to substantial collieries with workforces and pit communities the size of villages and small towns. A few months into the conflict, Lloyd George in a patriotic speech to a coal conference proclaimed that coal was 'everything for us, the country's life and blood, its international coinage'.

As well as digging coal for the war effort, often in dreadful and dangerous conditions, miners demonstrated 'their old work in a new guise' when serving in huge numbers during the Great War. Thousands voluntarily swapped the pit for what many thought would be a better and safer option, around a quarter of a million enlisting by 1915; and about one in five of all military volunteers came from the coalfields of England, Scotland and Wales, an astonishing proportion. The massive response to the Call for Arms was most obvious in industrial areas where the so-called 'Pals battalions' were established and it was these recruits who suffered so heavily during the disastrous Somme offensive of 1916. The sheer number and range of gallantry awards including several VCs - also testify to the immense contribution of former miners.

The many thousands of pitmen who paid the ultimate price are inscribed on public war memorials in coalfield communities, often dominating the listings. Such was the response from large pits that many others are commemorated on memorials specially erected by colliery and coal companies, one the earliest in the village of Brampton in South Yorkshire on behalf of Cortonwood Colliery.

Whether working below and above ground at collieries or as part of the armed forces, miners played a very significant role during the Great War of 1914-18, a total contribution that deserves to be told.