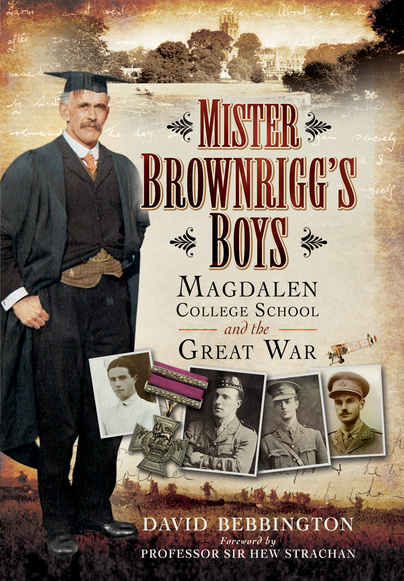 Add to Basket
Add to Wishlist
You'll be £30.00 closer to your next £10.00 credit when you purchase Mister Brownrigg's Boys. What's this?
+£4.50 UK Delivery or free UK delivery if order is over £35
(click here for international delivery rates)

No less than fifty Old Boys from Magdalen College School, Oxford died during or as a result of The Great War. Set against the hundreds of thousands of their countrymen this number may seem small but it left an indelible mark not only on their 'alma mater' but on the lives of their families and friends. Indeed the names of five of the School's six Houses are a permanent reminder of this extraordinary sacrifice (Callender, Chavasse, Leicester, Maltby, Wilkinson-Blagden).
One hundred years after the start of the War the background, school and service record, and circumstance of death of each of these young men is revealed for the first time. While every school in the country will have suffered loss, Magdalen College School is unique in that it numbers Noel Chavasse (the only double Victoria Cross winner of the War) as well as John Fox Russell VC MC among the Old Boys who fell. Others honoured in this fine book include a 1st Class cricketer, Francis Roberts, and a member of the inaugural Welsh Rugby team, Richard Garnons Williams.
Thanks to meticulous research each of the fifty accounts reveal fascinating snippets of social, school, sporting and military history, spanning the period leading up to and including the years and theatres of The Great War.
Mister Brownrigg's Boys will not only be especially significant to anyone connected with the school or the Oxford area, but will also provide a moving and informative personal level account of The Great War to the general reader.

For all interested in the First World War or those associated with Magdalen College School, 'Mr Brownrigg's Boys: Magdalen College School and the Great War' will prove a fascinating read...The book reveals the stories of fifty boys, all taught by one teacher, Mr Brownrigg, who go off to fight and don't return. Remarkable tales all, amongst the boys are those after whom the school houses are named - Blagden, Callender, Maltby, Leicester and Wilkinson - as well as Noel Chavasse, the only man to win two VCs during the Great War. Read the astonishing stories of a combatant vicar, a Welsh rugby international, a county cricketer and a groundbreaking geneticist, to mention only a few.

David Bebbington grew up in Cheshire and was educated at the University of Kent and Christ Church, Oxford before doing post-doctoral studies in Boston, USA. He now lives in Berkshire with his wife, two children, a dog and four chickens. He is Head of Cricket and a teacher of chemistry at Magdalen College School, Oxford. He is fascinated and passionate about the school's history and that of the First World War. In this, his first book, David has drawn upon all his diverse experiences to tell the unparalleled and unique story of one teacher and fifty of his students, in the lead up and during The Great War, Mr Brownrigg’s Boys.