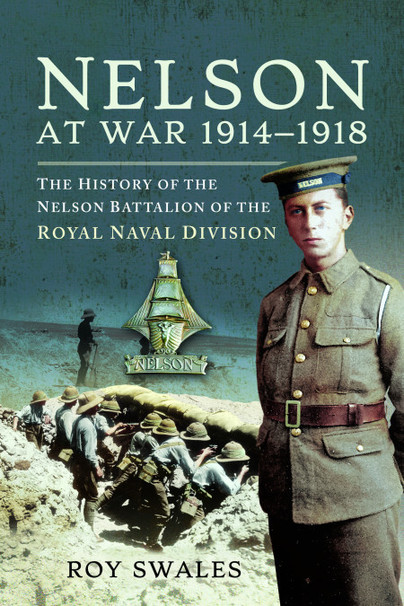 The History of the Nelson Battalion of the Royal Naval Division

The Royal Naval Division, a fighting formation of naval ratings and Royal Marines, was formed at the instigation of Winston Churchill at the beginning of the First World War. At first under the control of the Admiralty, it fought at the defence of Antwerp in October 1914 and through the whole of the Gallipoli campaign. In 1916 the Admiralty handed the Division over to Army control. Re-named the 63rd (Royal Naval) Division, it fought with great distinction and success with the BEF in France and Belgium.

The division was always an odd ball formation, fighting under the White Ensign, and its eight naval battalions were named after great admirals. The greatest of them all, Vice Admiral Horatio, Viscount Nelson, gave his name to Nelson Battalion. Like the other naval battalions, the Nelson had a complement of officers and ratings of the Royal Naval Volunteer Reserve and Royal Fleet Reserve seamen and stokers. Nearly 800 would lose their lives in the three and half years of its fighting existence.

The book traces the history of Nelson Battalion from August 1914 to February 1918 when it was disbanded. Against the background of the battalions movements and battles the fate of its sailor-soldiers is revealed, more than 300 individuals being mentioned in the text. A full roll of honour is also included.

A reprint of a classic unit history following the story of the Nelson Battalion part of the unique Royal Naval Division. Well researched & contains many rare illustrations.

Roy Swales may have written the book out of curiosity and as an act of filial piety, but the result is a compendium of information on an otherwise overlooked aspect of the First World War: BZ to Pen and Sword for reissuing this important work a decade and a half after it was first published.

I have a real I terest in the Royal navy division because I was a royal navy gunner myself.
This book is comprehensive and deals with all the major battles that the division fought in during ww1 and is also a great overall history of the war.
It has an easy flow to the style of writing that doesn't bog you down and yet gives you so much information.