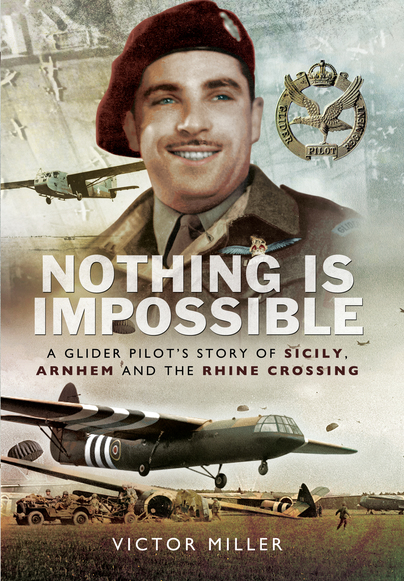 Nothing is Impossible (Hardback)

A Glider Pilot's Story of Sicily, Arnhem and the Rhine Crossing

This is an absolute beauty - War History Online

You'll be £17.50 closer to your next £10.00 credit when you purchase Nothing is Impossible. What's this?
+£4.50 UK Delivery or free UK delivery if order is over £35
(click here for international delivery rates)

Battle is the severest test a man can be called upon to undergo; it can bring out the best in a man – and the worst...

The author of this book, Victor Miller, joined the Queen's Royal Regiment, at Guildford, upon the outbreak of the Second World War. He volunteered for the elite Glider Pilot Regiment upon its formation and passed, with above average marks, the RAF pilot training programme.

From here, he was to take part in three of the most iconic airborne operations of the entire conflict. The invasion of Sicily, the Allies first attack in to Europe, where he was wounded and temporarily taken prisoner; Arnhem, where the 1st Airborne Division struck sixty-four miles behind enemy lines only to clash with two SS Armoured Panzer Divisions resulting in 80% losses in nine days; and the assault crossing of the Rhine, into Germany proper, with 'only' 30% losses.

This remarkable story, jotted down shortly after each operation when the events were still vivid in the author's mind, is an astonishing record of skill, bravery, comradeship and resourcefulness which represents a fitting tribute to many fallen friends and colleagues. The book was published initially in 1994, before the author's death. This posthumous edition comes with brand new supplementary content, drawn together by the author's sons and family.

Sad that the author is no longer with us, but great that the publisher has produced a new posthumous edition with additional material provided by his sons and family. Pioneered by the Germans, vertical insertion by glider and parachute was to revolutionise land warfare. This personal account by a British glider pilot of the large scale airborne assaults by British troops is fascinating and very valuable – Most Recommended.

A hard-cover book from Pen and Sword telling the story of one man's experiences as a glider pilot in WW2...

... The story is a fascinating read, and one I found I couldn't put down. It simply records his experiences of basic training in Guildford and then his application to join the newly formed Glider Pilots Regiment...

... For anyone with an interest in the events of the Arnhem operation I think should really read this one. It doesn't try to tell the broad story of the drop, but very much his own personal experiences and feelings as one of the men who took part, including his feelings about surviving when a number of his friends were not so lucky. There are a few photos in the middle of the book, and these include images of some of the author's original sketches in his notebooks which are marvellous to see.

An excellent book and one I thoroughly recommend without any reservation.

Nothing Is Impossible by Victor Miller remains a unique book among those that tell the story of Operation Ladbroke, the massed glider assault that opened the Allied invasion of Sicily. It is a gripping first-person account by a glider pilot who was one of the very few who landed in the immediate area of the LZs, and who was one of the few who survived the fighting on the Ponte Grande bridge. It is also extremely fresh...lending enormous credibility to the accuracy and authenticity of his account... We owe the Miller family our gratitude for ensuring the publication of Victor’s outstanding and unique account.

This book describes the author’s experience as a SNCO in the Glider Pilot Regiment in World War Two. Written from contemporaneous diaries and illustrated both with photographs and the author’s own sketches, it is a superb first-hand account from a highly-trained specialist who fought in the airborne assaults on Sicily, Arnhem and the Rhine.

The author, Victor ‘Dusty’ Miller is a brutally honest writer. He captures the various periods of a soldier’s existence: boredom (it would appear that ‘hurry up and wait’ is nothing new), excitement, exhaustion, confusion, fun, fear and exhilaration. These are shown through his experiences in the first Allied large-scale Airborne attack on Sicily in 1943, his nine days under bombardment at Arnhem in 1944 and his part in the assault over the Rhine in 1945. During these operations, he is wounded, taken prisoner, freed, takes part in fighting patrols and platoon-level attacks, guards prisoners, loses friends, digs in (a lot!) and each time having flown a troop-carrying glider into action. This book captures both the first-hand experience of certain operations and the unique capabilities of soldiers in the Glider Pilot Regiment: well-trained infanteers, skilled pilots and both leaders (to troops missing their own commanders) and led (when forming up in their own sub-units).

All three operations clearly show the difficulty and confusion of Airborne assaults. Crash landing in the dark in Sicily and taking place in the chaotic fighting to get to and then hold the Ponte Grande Bridge (a critical objective) is described clearly and effectively as is his subsequent wounding and being taken prisoner. The next operation, Arnhem, is easier being in daylight but has graphic descriptions of crowded airspace followed by the intensity of the bombardment in Oosterbeek; his battle ends by being one of the guides back to the River Rhine for the night extraction – alone, frightened, wet and under mortar fire is not something for which I envy the author. His final operation, the crossing of the Rhine, is just as confusing and frightening; landing blind in smoke and dust and then going into an immediate platoon attack on landing. This is followed by a lot more digging in, honesty about his fears of indirect fire and a number of small-unit actions.

The book lacks wider detail of the operations which, counter-intuitively, works. This book is not an introduction to Airborne operations but a first-hand account. The lack of wider detail and the trench-level perspective provide a graphic description of how confusing a soldier’s experiences can be and how demoralising this can be. The book also brings out the unique nature of the Glider Pilot Regiment, the only unit to take part in all the major Airborne operations of the war, and the subsequent high casualty rate, some 40%; the highest casualty rate of all the Airborne forces.

I recommend this book to both those with an interest in Airborne Forces and anyone interested in a soldier’s-eye view of the fighting. It is keenly and honestly written and an excellent read.

This is easily one of the best WW2 books I have read. Really. Victor Miller, one of the British glider pilots, wrote his ‘reports’ immediately after each operation, and added drawings to his notes as well. Back in 1994 his notes were published as a book, with the help of his sons. Not only was he a gifted glider pilot and a very brave soldier, he also had a great writing style that really captures the imagination of the reader, making you feel THERE. Also ‘amusing’ to us non-British readers are the many British expressions and way of wording things. I find it nice to read.

Victor’s story begins with his recollection of the training in the UK. Already a much appreciated story. I had never seen such a detailed account of the many hours and flights these glider pilots did before actually going into action. It also gives a great insight in the behaviour of the Horsa gliders and their operation and for the American WACO gliders that were used in the Sicily landings.

The subsequent transferral to Northern Africa and their first battle experience in Sicily (Operation Ladbroke) is a separate story in itself. Could well be a separate book too. Victors writing style is mesmerizing and you won’t put the book down easily. His descriptions of day to day life are just as interesting and vivid as his actual battle accounts!

If you thought that glider pilots were just flying and/or crashing gliders, think again. After landing they turned into infantry and fought alongside the troops they transported! Victor even gets taken prisoner on Sicily and is wounded as well. But he escapes from the island eventually and recovers from his wounds in North Africa and later back in England.

Another very interesting part of the book covers the training for D-Day. I never realized they did so many training flights, practicing formation flying and night landings in confined spaces. In the end, Victor was not chosen as one of the D-Day pilots. But his chance of new action came pretty soon afterwards when he was one of the Operation Market Garden pilots, putting British troops down north of the Rhine, near Oosterbeek and Arnhem.

The battle account of that relatively brief period is very detailed and really impressive. Victor and a number of his fellow glider pilots are dug in near Hotel Hartenstijn in Oosterbeek, the British HQ, and they are under constant artillery and mortar fire for all their time down there. I have visited the area and the hotel (now a museum) many times, but only now do I have a true understanding of what the situation was during those few horrible days in September 1944. Victor’s account again is very vivid and one can feel each and every mortar grenade falling near their slit trenches.

Although Victor wasn’t near the bridge in Arnhem – the subject of most books about Market Garden – and he wasn’t in the front line, he was under direct enemy fire all those days and even from his vantage point in the park of the hotel, the battle was fierce, relentless and incredibly exhausting for all involved.

The remaining survivors are evacuated back across the Rhine after 10 days of fighting. That must have been one of the most frightening experiences, in the pitch dark and with the Germans closing in from all sides. The men had to row back in overladen boats themselves, fighting not only their fatigue and German bullets, but also the current of the large river!
Impressive!

The last part of the book describes the renewed training back in England and the subsequent landings across the Rhine again, this time in Operation Verity, landing on German soil just east of The Netherlands. Compared to Market Garden and Victors experience there, Verity was a bit ‘easier’. Better prepared, larger numbers of allied attackers, immediate support by the 2nd Army all helped to make this a much quicker battle for the allied. The fact that the opposing troops were of lesser quality helped too of course.

This book is a MUST READ for anyone interested in the actions of the airborne troops during World War 2, and seeing it through the eyes of one of the transport pilots is most interesting!

If you have read it before, go back again, if you haven't had the opportunity to enjoy it - here's your chance!

But it is Market-Garden that dominates this story and Victor’s immensely readable account of the disaster is possibly one the best you’ll ever read... I have to say this book is an essential read for anyone interested in airborne operations first and foremost, but also to people who appreciate unvarnished and authentic history from the people who lived it. Victor Miller was a soldier, a pilot, a great writer, an accomplished artist and a dedicated family man. This outstanding book is his monument. I will cherish it and so should you.