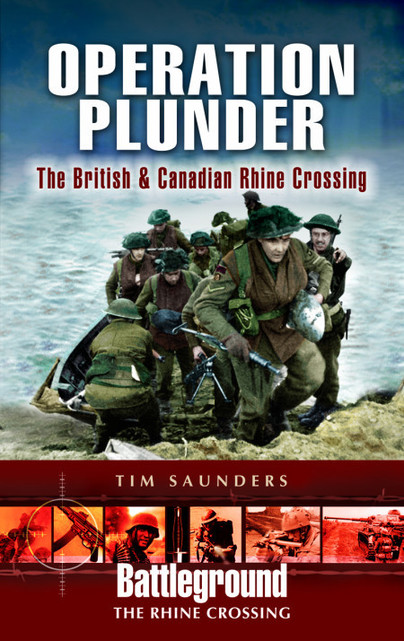 Click here for help on how to download our eBooks
Add to Basket
Add to Wishlist
You'll be £4.99 closer to your next £10.00 credit when you purchase Operation Plunder. What's this?
Need a currency converter? Check XE.com for live rates

Operation Plunder was the overall name for 21st Army Group's crossing of the Rhine but each of the major elements was known by its own codeword, TURNSCREW and TORCHLIGHT, the British assault river crossing; WIDGEON, FLASHLIGHT, the crossing by XVI US Corps.
Operation Plunder joins over 100 previously published titles in the acclaimed Battleground series. These well written and highly illustrated guide books not only bring the battlefields alive for visitors, they also entertain readers at home.

Here is yet another splendid volume from Pen and Sword’s Battle Ground Europe series of books. These excellent, highly illustrated and handy sized volumes provide the military historian, casual reader and researcher with a wealth of information that in my opinion, is invaluable during research into the particular campaign covered and thanks to the excellent suggested itineraries also included, is especially helpful when touring the actual battlefield areas themselves.

The author – a serving British Army officer and notable military historian to boot, has a wealth of operational experience behind him. He already has several publications in this series to his credit and in this particular volume, he successfully tells the fascinating story in both words and excellent pictures of the allied 21st Army Group Rhine crossing in March 1945. Although “Plunder” was the overall name for the entire operation, each of the major elements had its own codeword – “Turnscrew” and “Torchlight” for the British assault and river crossing and “Wigeon” and “Flashlight” for the crossing by XVI US Corps.

The operation was a success and I am sure this excellent value for money readable book will be too – I enjoyed it and it is now an valuable addition to my own library.

Lavished with photographs, maps and veterans accounts, this is a concise, thorough and eminently readable description of Field Marshal Montgomery's assault crossing of the Rhine on the 23rd March 1945, with two British and two American divisions carrying out what would be the last set-piece battle of the Second World War. Tim Saunders first describes the difficult advance on the Rhine, the preparations undertaken by both sides, and the various phases of the British crossings; beginning with the bloody diversionary attack by the 51st Highland Division around Rees, the capture of Wesel by the 1st Commando Brigade, and the main crossing by the 15th Scottish Division who were to relieve the Airborne troops further inland. The battle to secure the Diersfordterwald and the bridges over the River Issel by the 6th British and 17th US Airborne Divisions is also included, though in less detail as this is a separate subject in its own right, one indeed which is covered by Tim Saunders in another book in the series; Operation Varsity.