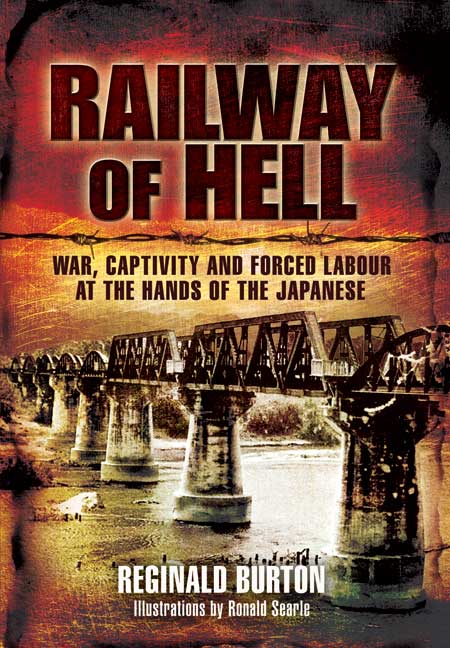 War Captivity and Forced Labour at the Hands of the Japanese

Add to Basket
Add to Wishlist
You'll be £12.99 closer to your next £10.00 credit when you purchase Railway of Hell. What's this?
+£4.50 UK Delivery or free UK delivery if order is over £35
(click here for international delivery rates)

A young captain in the Royal Norfolk Regiment, Reggie Burton was wounded in the closing stages of the disastrous defence of Malaya and Singapore. He vividly, yet calmly and with great dignity, describes the horror of captivity at the hands of the Japanese. After initial confusion, the true nature of their captors emerged as, increasingly debilitated, the POWs were forced into back-breaking work. This was only a taste of what was to come. After a horrific journey in overcrowded cattle trucks, Burton and his dwindling band of colleagues were put to work building the notorious Burma Railway. Somehow he survived to tell this moving and shocking story.

Railway of Hell is not so much about the building of the Burma-Siam railway as it is about the existence of the men who built it. Constructing a railway is a project. It has a beginning, a middle and an end. For the men who built the railway, however, there was no project. There was no beginning, no middle and no end. As Burton shows us, for the POW's - slave labourers, really - there was only survival in a perpetual moment.

Completion of the Burma Railway

The Burma Railway, also known as the Death Railway, is a 415 kilometres railway between Bangkok, Thailand, and Rangoon, Burma, built by the Empire of Japan during World War II, to support its forces in the Burma Campaign. Forced labour was used in its construction. About 180,000 Asian labourers and 60,000 Allied prisoners of war worked on the railway. On 17 October 1943, the two sections of the line met about 18 km south of the Three Pagodas Pass at Konkuita. Most of the POWs were then transported to Japan.