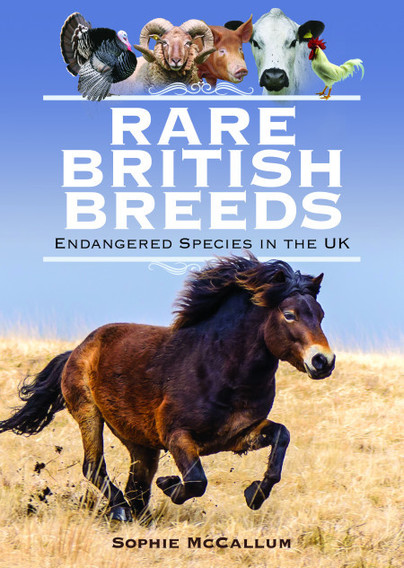 Endangered Species in the UK

Preorder
You'll be £20.00 closer to your next £10.00 credit when you purchase Rare British Breeds. What's this?
+£4 UK Delivery or free UK delivery if order is over £30
(click here for international delivery rates)

Rare British Breeds is a book inspired by the Rare Breed Survival Trust Watchlist, which is published annually, listing the species of sheep, cattle, horses, pigs, goats and poultry (chickens, turkeys, ducks and geese) that are endangered in the United Kingdom.

This information is gathered from breed societies and lists the number of breeding females alive, along with their conservation status. Each species, regardless of their origin, is unique to the UK, either through cross breeding or by evolution.

There are good reasons for wanting to keep these breeds alive; not just the genetic makeup of these creatures which means many are able to survive and thrive in very formidable conditions - a prerequisite for enduring possible future environmental disasters. Once gone, these genes will never be able to be replaced. They have taken thousands of years to develop.

The book looks at the history of every breed, with their evolutionary roots, development over time, exportation, cross breeding and changing relationship to mankind as farming techniques react to societal shifts. Their particular physical characteristics such as meat, wool, milk, eggs or ability to pull great weights are discussed as well as their conservation status and the national and international efforts being made to ensure their survival.

She has spent 20 years volunteering on Conservation Projects throughout the UK and Africa, including working with the Green Team at the Eden Project in Cornwall. Her interests took her in different directions, and she has worked extensively in horticulture, whilst completing a degree in Environmental Studies and Creative Writing at the Open University. Sophie was first intrigued by the idea of British native breeds when she saw a stand at Countryfile Live in August 2016. She is hoping this book will encourage others to keep a rare breed. This book is unique amongst previous books on Rare Breeds, as it covers each and every one of the animals and poultry on the Rare Breeds Survival Trust (RBST) Watchlist. Since the Trust was formed in 1973, no British Rare Breed has become extinct. They do valuable work on genetics as well as keeping up to date records of numbers, which they obtain from breed societies.