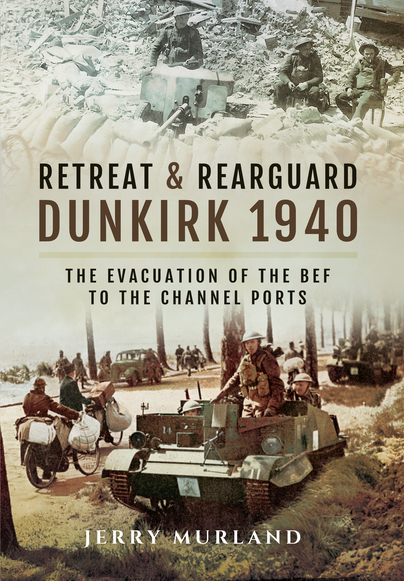 The Evacuation of the BEF to the Channel Ports

Click here for help on how to download our eBooks
Add to Basket
Add to Wishlist
You'll be £4.99 closer to your next £10.00 credit when you purchase Retreat and Rearguard - Dunkirk 1940. What's this?
Need a currency converter? Check XE.com for live rates

This book, the third title in the Author’s Retreat and Rearguard series, covers the actions of the BEF during the retreat from the Dyle Line to the evacuation points of Dunkirk, Boulogne, Calais, St Valery-en-Caux and finally the Cherbourg Peninsula.

Some of the engagements are relatively well known (Cassell, the Arras counter-attack and the notorious Le Paradis SS massacre) but the author has unearthed many less known engagements from the long and painful withdrawal. While the main Dunkirk evacuation from the port and beaches was over by early June, elements of the BEF fought on until 21 June.

In relating those, often heroic, actions the author catches the atmosphere of desperate defiance that typified this never-to-be-forgotten period.

There is a place for detailed narratives such as this that do not feel the need to steer the reader too much.
An essential purchase.

The rescue of the British Expeditionary Force was an extraordinary feat of human ingenuity and daring. This new volume digs into the details of the almost super-human effort.

This is a superb and highly informative book, and a masterpiece of research on a much neglected aspect of the British experience of WW2. Ideal for those wanting to follow these sites on the ground, and perfect for those who want to understand a complex period in our military history. Highly recommend, one of my favourite WW2 books of 2016.

Murland, a writer and battlefield guide who served with the Parachute Regiment of the British Army, relates the story of the retreat of the British Expeditionary Force (BEF) from the River Dyle to the channel coast of France from where Operation Dynamo began during the France and Flanders Campaign in May 1940 during World War II. A quarter of a million men of the BEF were evacuated from the coast of France over nine days. The author concentrates on the tactical aspects of British rearguard units during their withdrawal to Dunkirk, as well as what led up to it.

Dunkirk - one of those taboo names for many an old soldier, including my father whom I was fully aware took part in the Normandy campaign, but only discovered years after his death that he was also involved in that withdrawal from France four years earlier. Murland's latest book for Pen & Sword, presents the reader with a more personal viewpoint of the BEF's struggle to hold back a far superior, more experienced and better equipped force.

Very well researched,Dunkirk 1940 draws heavily from the personal diaries and memories of those who were there and this makes for a much easier to read book, rather than dry facts one after another. The vast majority of these personal stories have never been published before, especially from the perspective of the rank and file who fought just as heroically as those men who came away from the campaign with a chest full of medals. It was these men, many of whom never returned, who helped to make the evacuation a 'success' by holding back German forces long enough for 338,226 soldiers to be evacuated; the latter, being described by Churchill as a 'miracle of deliverance'.

Easy to dip into, Dunkirk 1940 has been thoroughly researched and the Appendix, Order of the Battle and the 14 pages of Notes that follow verify how much work the author has put in to confirm the facts.

The miraculous salvation of the vast majority of the beleaguered and out-manoeuvred British Expeditionary Force and a large number of French troops from northern France in late May and early June 1940 remains a source of fascination to laymen and military historians. An ideal subject for Jerry Murland's Retreat and Rearguard series, Dunkirk 1940 covers the dramatic actions during the desperate fighting withdrawal from the Dyle Line to the evacuation points of Dunkirk, Boulogne, Calais and Dieppe.

As well as drawing together several lesser known accounts describing the engagements at Cassel, Arras and the Bergues-Furnes Canal, the author has unearthed numerous previously unpublished sources describing the myriad of rearguard actions that the BEF undertook during their retreat to the Channel coast.

It is through these personal accounts of the fighting that the true nature of those dark days of 1940 are revealed. In relating those often heroic battles and tragedies such as the Le Paradis Massacre and the defence of St Venant, Retreat and Rearguard - Dunkirk 1940 catches the atmosphere of desperate defiance that typified this never-to-be-forgotten period.

To say I was pleased to be asked to review the Authors latest book is, to be honest, an understatement.

I already own a number of Mr Murland’s books and have used them on a number of occasions as pre reading prior to guiding Battlefield Tours. I have found them to be very readable, easy to follow with numerous well presented and easy to understand maps.

This current book is no different. It is again easy to read and following the course of events is a steady and wonderfully concise process.
In his latest offering Mr Murland covers the experiences of the BEF during the dark days of May and June 1940 from the advance of the BEF to the River Dyle to the retreat and withdrawal from the shores of Dunkirk. The book focuses upon the many rearguard actions undertaken by the Units within the BEF – action such as those undertaken by the RTR at Arras to the terrible climax during the battle around Wormhout resulting in the murder of between 80 and 90 British soldiers by members of the 2nd Battalion LAH SS, we hear the tales direct from the soldiers who participated, we read about acts of bravery and, of course the humour of the British Tommy, making the whole book a somewhat personal account.

By piecing together the words and recollections by those who took part, Mr Murland has again produced and excellent piece of work. The book takes one back to the days in 1940 and at times I felt I was walking and fighting with them, sharing their pains and sorrow as well has their humour and cheerfulness.

I cannot recommend this book enough. A very worthwhile and needed addition to any personal collections or library’s – I would even goes as far as stating THIS IS the definitive account of the BEF’s rearguard actions.

Excellent well researched book in which the story of the lesser publicised actions are now rightfully highlighted. An easy to understand book which the author has researched extensively and using private diaries and personal papers gives us a real insight into the battles and rear guard actions which enabled the British Army to fall back onto the evacuation beaches and ports of embarkation in the dark days of May/June 1940.

The Story of Dunkirk is Legendary, the small ships and heroic efforts of the Navy need no further mention and in this book they rarely do, but the story of our troops who fought and in many cases died to delay the German advance to enable this legendary evacuation to take place is. Alongside General Montgomery you will read about the likes of Privates Johnstone and George Pinkney of the Durham Light Infantry and Private Bill Holmes of the Royal Sussex who played his part along with Brigadier Somerset. Their story`s are just a small part of an epic struggle to fall back to the coast. Each man has a story to tell and Jerry Murland has collected these stories, often never before seen in a published work, he has checked and double checked against all official and semi official documentation and credited each and every one of his known sources to produce a very good factual book.

Winston Churchill said wars are not won by defeats and the Campaign in France during 1940 was indeed a massive defeat but the stories of the bravery, sacrifice and dedication to their duty of those men who fought in the fields and small towns of France and Flanders in 1940 should always be told and thanks to Jerry Murland we now have a new insight into the part some of those men played in the retreat and the many rear guard actions that were fought. A welcome addition to any library