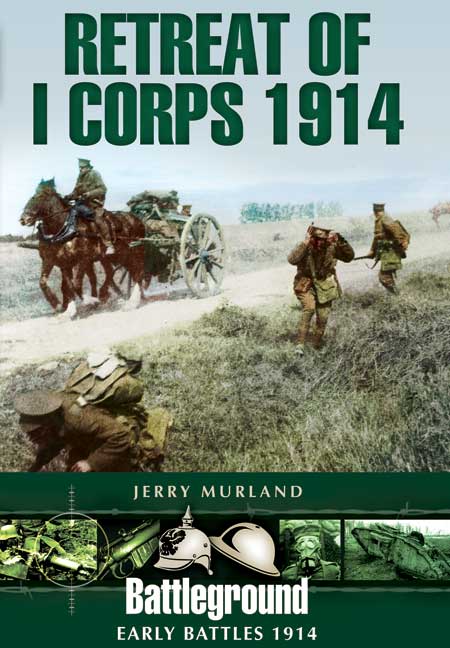 Click here for help on how to download our eBooks
Add to Basket
Add to Wishlist
You'll be £4.99 closer to your next £10.00 credit when you purchase Retreat of I Corps 1914. What's this?
Need a currency converter? Check XE.com for live rates

On 23 August 1914 it was only the two divisions of General Smith-Dorrien's II Corps that were directly engaged with the German First Army along the line of the Mons-Conde Canal. As the British Expeditionary Force withdrew from Mons and bivouacked around Bavay on 25 August, Sir John French and his GHQ advisors – unsure of the condition of the routes through the Forêt de Mormal - ordered the British Expeditionary Force to continue their retirement the next day and to avoid the 35 square miles of forest roads.

Consequently II Corps used the roads to the west of the Forêt de Mormal and Sir Douglas Haig's I Corps those to the east – with the intention that the four divisions should meet again at Le Cateau. It was an intention that was ambushed by circumstance as I Corps encountered units of the German 7th Division at Landrecies on 25/26 August. Unsure of the weight of the German attack at Landrecies, Douglas Haig hurriedly left for Grand Fayt and ordered his two divisions to immediately begin their retirement along a route that would take them west of Le Cateau.

It was this decision that kept the by now five divisions of the BEF apart until 1 September and is the subject of this book. I Corps was now coming under attack from the German Second Army and the resulting rearguard actions that Haig's men were involved in are covered in this volume:

This new work is focused almost entirely on the route taken by Lieutenant General Sir Douglas Haigh and the two infantry divisions of I Corps. Clearly in a book of this size it is an impossible task to relate the experiences of every unit in I Corps, but the author
attempts – and succeeds – to provide enough of the story to enable the reader to gain an understanding of what took place and why. Well illustrated with monochrome photographs and maps, the story of the retreat has been divided into three stages; Mons to Le Grand Fayt; Etreux to Cerizy and Villers-Cotterets to the Marne, each of which is also supported by a tour that takes the battlefield visitor to the places described in the text. Two appendices – Approximate Daily March Statistics and I Corps, plus German First and Second Army orders of battle, a select bibliography and an index round off the text.

This is an excellent addition to a very useful and interesting series. It is worth noting that this title joins over 140 published titles in Pen & Sword’s Battleground series. These illustrated guide books not only bring the battlefields alive for visitors, but also for readers at home.

Interesting, informative and a well thought through text.

This addition to the best-selling Battleground series from Pen & Sword follows the well-established format of a pocketable book that is lavishly illustrated and seems somehow to pack in more information than there is page space. Intended to assist those making the trip to the battlefields, the book also provides descriptive review for the reader at home and provides a wealth of detail that is very helpful to enthusiasts making an extensive study of the conduct of war on the Western Front. Impossible to praise this book too highly!

[This book] is the ideal balance of maps, photographs and first-hand accounts, all linked by a knowledgeable and engaging narrative. It also includes some helpful data appendices including daily rates of march, orders of battle etc.
A concise and informative guide... this is a well-balanced and useful guidebook.