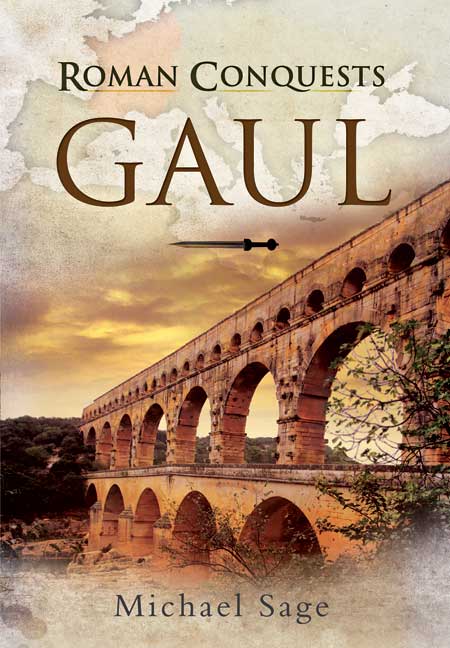 Add to Basket
Add to Wishlist
You'll be £19.99 closer to your next £10.00 credit when you purchase Roman Conquests: Gaul. What's this?
+£4.50 UK Delivery or free UK delivery if order is over £35
(click here for international delivery rates)

Ever since their sack of Rome in the early fourth century BC, the various tribes of Gauls to the north were among the Roman Republic's most feared and respected foes. This book describes how Roman armies eventually carried war into their enemies' homelands and brought them into their expanding empire.

Michael M Sage relates the establishment of Rome's first footholds in Gallic territory, before moving onto Julius Caesar's dazzling seizure of all Gaul in the space of a few years. Caesar army repeatedly defeated much larger armies drawn from a fierce warrior culture. These, the most famous of all Roman campaigns of conquest, are described and analysed in great detail, as are the events of Vercingetorix's great rebellion which almost succeeded in throwing off Roman rule before it could be consolidated. Caesar's epic siege of Alesia provides a dramatic climax.

The narrative reads pleasantly and will be entertaining for anyone interested in the Celts or Romans.

An excellent introduction provides the background to the action of the book. Michael Sage has managed to narrate what is perhaps one of the most well-known of Rome's conquest, carried out by its most well-known conqueror, in a lucid yet adequately in-depth manner. Highly recommended to any reader of Ancient Warfare magazine.

This is a useful entry in this series looking at one of the best known of all Roman Conquests.

Why did Julius Caesar cross the Channel from Gaul to invade England n 54 BC? Some historians say it was to prevent Kent tribes from going to Gaul to help fight the Romans. Others claim Caesar was lusting after British pearls. Michael Sage says that's rubbish. Caesar, he argues, made the crossing from Pas de Calais to Dover in order to boost his political standing back in Rome. He tells how Caesar almost ran into serious trouble when a sudden storm wrecked some of his invasion fleet and how he was impressed by the use of fighting chariots by the British Celts. Only one chapter of this book relates to Casesar's invasion of England, the rest, as the title suggests, concentrates on how he fought and eventually pacified the various tribes in Gaul. The French still celebrate the war Vercingetorix managed to unify the various tribes in Gaul and lead them in a war against Caesar. He is honoured in cartoon magazines and in exhibitions were his battles took place. His memory resurfaced during the German occupation in the Second World War to epitomise French resistance to an invader. In 52 BC Vercingetorix (his name means the Great King of the Brace) was defeated by Caesar in battle at Alesia (near Dijon), surrendered to him, and was taken to Rome where he was eventually executed. The book goes into previous battles between Caesar and the Gauls and how he made allies of some tribes which helped him to defeat others. He often treated his defeated enemies well but after one siege he ordered that all his opponents should have their hands chopped off.