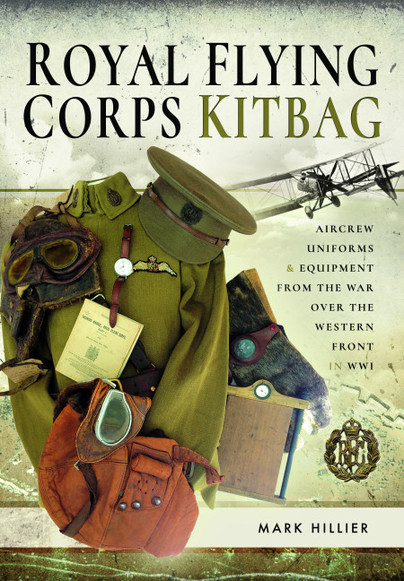 Add to Basket
Add to Wishlist
You'll be £25.00 closer to your next £10.00 credit when you purchase Royal Flying Corps Kitbag. What's this?
+£4.50 UK Delivery or free UK delivery if order is over £35
(click here for international delivery rates)

It is a real eye-opener to read about the trials and tribulations involved in finding out which clothes, goggles, gloves, helmets and boots, etc. were the best in those early days of flight, which were difficult enough without being shot at, and the research and testing necessary to manufacture them.

There are also chapters on paperwork and documents and on the transition from the Royal Flying Corps to the Royal Air Force. With appendices, notes and an extensive bibliography, this is a book you will want to refer to again and again.


Fascinating Facts Of The Great War

"With this book, Hillier has added to the historiography of World War I aviation by detailing the evolution of flight gear and uniforms and giving us a fine visual reference. It will please aviation historians as well as collectors and re-enactors and is highly recommended."

This book, like Mark Hillier's precedents (but focused on the 1940 Battle of Britain) offers the enthusiast a way to learn about the various clothing and equipment of a RFC aviator. He does not leave aside the transition to the iconic blue RAF uniform, and above all offers a way to orient himself to any collector of these now very rare pieces. A book that therefore does not betray expectations and confirms Mark Hillier as one of the great experts in equipment and uniforms of the RFC and RAF.

Packed with fascinating detail, this volume gives a penetrating insight into aviation conditions 100 years ago. It is essential reading for anybody who is interested in the background to aviation in the First World War.

Article: 'Just how did those early RFC pilots cope?’

An essential work in our military uniformological library.

What's not to like about this book? For the RFC enthusiast/collector and even for those with only a passing interest in this corps, this book has everything.

First and foremost, the author is a passionate enthusiast who, over the years has indulged his hobby and built up his own significant archive of everything RFC. Second, he has shared his passion in this well-written and profusely illustrated reference work which, I suspect, has already become the RFC 'bible'; the single most authoritative source for information about aircrew uniforms and equipment from the war over the Western Front during the First World War. I can't recommend this highly enough and I am sure this will be a much used source over the years to come. Well done! Superb! Grab a copy whilst you can.

What's not to like about this book? For the RFC enthusiast/collector and even for those with only a passing interest in this corps, this book has everything.

First and foremost, the author is a passionate enthusiast who, over the years has indulged his hobby and built up his own significant archive of everything RFC. Second, he has shared his passion in this well-written and profusely illustrated reference work which, I suspect, has already become the RFC 'bible'; the single most authoritative source for information about aircrew uniforms and equipment from the war over the Western Front during the First World War. I can't recommend this highly enough and I am sure this will be a much used source over the years to come. Well done! Superb! Grab a copy whilst you can.

Review article: 'With only the most basic kit, intrepid RFC pilots were always... WINGING IT'

This fascinating book examines in detail what Corps aircrew wore as they took on their German enemies over the trenches in what were the formative years of military aviation.

The book is a very well-produced volume with clear colour photos, interspersed throughout the text, of surviving equipment and clothing in museums or private collections, along with contemporary photos of the items in use. The text is informative and concise with extracts from relevant personal accounts. Inevitably the longest chapter is on flying clothing, but there are also chapters on flying equipment (maps, map boards, personal weapons, watches etc), uniforms, badges, and paperwork. Many enthusiasts will be able to recognise an RFC ‘Maternity Jacket’ or Sidcot suit, but, without a book such as this, for most of us a jacket or a helmet would be just a jacket or a helmet. There were several styles of such items available; a new pattern did not necessarily mean the previous one was withdrawn, so several styles might be worn by men of the same unit. It is surprising this was officially sanctioned. This was possibly because the aviation service was in its formative years without established traditions and, during a war, total replacement was not a priority. Many flying personnel bought their own flying kit, which added to the variety.

A fascinating new addition to the unique ‘Kitbag’ series from Frontline books. Although this book contains a great many images, mostly in full colour, there is also plenty of informative text and many images are published for the first time. – Very Highly Recommended.

This is almost another in the 100 objects series, this time looking at what Royal Flying Corps officers were required to carry in their kitbags. Fascinating!

After carefully reading this book I can say that it is of exceptional quality. It is well worth the investment and the author has spent numerous hours
researching and reviewing the contents. In short, if you desire to know what the fledgling RFC aviators took into battle with them in World War 1 then you must get a copy of this book.

This book provides as much as one could wish to know about the RFC and its pilots. By offering detailed insights into the kit they wore, much of it experimental and emerging to deal with ever changing situations, the reader gets a comprehensive view of the problems, the solutions and the people. As expected in such circumstances many of the solutions, particularly to protect from cold at altitude were the result of individuals getting things done rather than the RFC providing solutions. The profile of many individual pilots allowed them to finance better equipment until the RFC caught up and formally adopted some of the ideas. The book is a superb reference book and is graced with excellent images that add real value. Recommended.