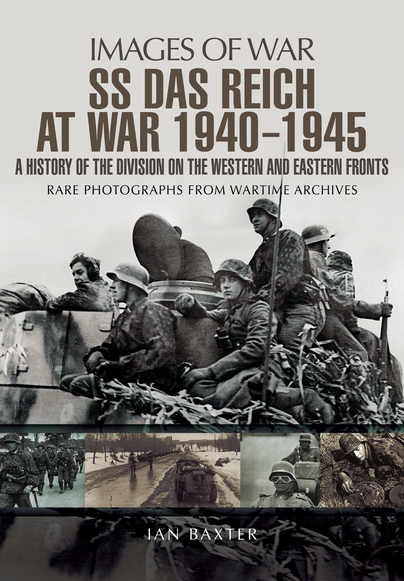 Click here for help on how to download our eBooks
Add to Basket
Add to Wishlist
You'll be £4.99 closer to your next £10.00 credit when you purchase SS Das Reich At War 1939-1945. What's this?
Need a currency converter? Check XE.com for live rates

Between 1933 and 1939, the strength and influence of the SS grew considerably with thousands of men being recruited into the new ideological armed formation, many into units known as the SS-Verfgungstruppe (Special Disposal Troop). These troops saw action in Poland before switching to the Western Front in 1940. Out of this organisation the SS Das Reich Division was created.

This book, with its extensive text and over 250 rare and unpublished photographs with detailed captions describes the fighting tactics, the uniforms, the battles and the different elements that went into making the Das Reich Division such a formidable fighting force. The chapters reveal the Division as it battled its way through Poland, the Low Countries, the Balkans and the Eastern Front. Finally the Das Reich defended Normandy before falling back to Germany.

The Division gained its fearsome and notorious reputation for its fighting ability, often against vastly numerically superior forces, as well as its fanatical zeal.

Certainly a reading to be recommended.

The origins of the SS Division Das Reich start with the nascent Nazi Party in the 1920’s and 1930’s. Originally the SS started as an organisation with the remit of protecting senior leaders of the Party and ensuring the security of Party meetings. It grew as the
Party became more popular and eventually “overtook” the SA under whose umbrella the SS had started.

Between Hitler assuming power in 1933 and the outbreak of World War 2 the strength and influence of the SS grew considerably. Initially units called SS-Verfuegungstruppe
(Special Disposal Troops) were formed. These were armed troops and were a very ideologically driven formation. They saw combat in Poland before moving to the Western Front in 1940.

Out of this organisation what eventually became known as the Waffen-SS was created. This essentially was the army of the SS and it effectively was a fourth armed force. The normal Wehrmacht comprising of the Army, Navy and Air Force being the other three branches. Thus the “Das Reich” was born.

This pictorial book charts the rise of the Das Reich from its initial small size to its final
manifestation as a large and powerful Waffen SS Division. It was one of the more famous SS Divisions and earnt a reputation as a formidable opponent. On the Eastern Front they knew that no quarter would be given to them if they were captured by the
Soviets.

There are many rare and unpublished photographs in this volume – indeed over 250
of them. The interesting supporting text describes the history of the unit, its equipment, activities and battles. It is chaptered according to its chronological history and makes for a very interesting read.

The history of the Waffen-SS is of interest to a wide audience and this book will appeal to such tastes. It is packed full of details and the photographs are excellent. Uniform and heavy equipment “buffs” would find it exceptionally interesting. If you are wanting to research this unit then this publication is a very good place to start.

This is a worthy addition to the highly popular Images of War series. Himmler had hoped to eventually replace the German Army with SS troops. He failed to achieve that but the Waffen SS became an important element in the German land forces – Highly Recommended.

This is one great picture album. Highly recommended to modelers and historians alike.

An interesting book with an unprecedented visual archive of great value, and a source of luxury documentation for the modeler and miniaturist. Awesome...

The photos support each of the chapter topics and provide some interesting historical images, while for the modeller there are plenty of useful references in terms of uniforms and equipment as well as some inspiration that could lead to a diorama or two.