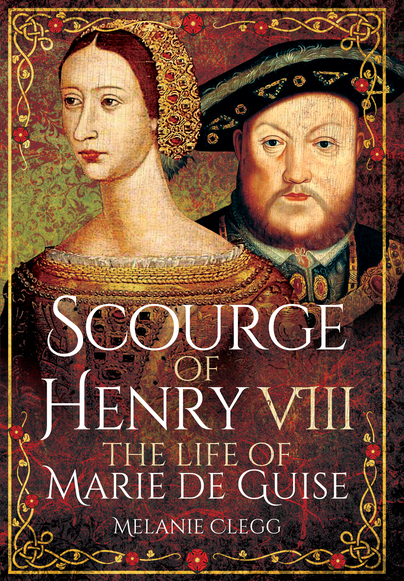 The Life of Marie de Guise

Chosen as Majesty Magazine's October Book of the Month!

Get Scourge of Henry VIII (Kindle) for FREE when you purchase 2 other eBooks.
Need a currency converter? Check XE.com for live rates

Although Mary, Queen of Scots continues to fascinate both historians and the general public alike, the story of her mother, Marie de Guise, is much less well known. A political power in her own right, she was born into the powerful and ambitious Lorraine family, spending her formative years at the dazzling and licentious court of François I. Although briefly courted by Henry VIII, she instead married his nephew, James V of Scotland, in 1538.

James' premature death four years later left their six day old daughter, Mary, as Queen and presented Marie with the formidable challenge of winning the support of the Scottish people and protecting her daughter’s threatened birthright. Content until now to remain in the background and play the part of the obedient wife, Marie spent the next eighteen years effectively governing Scotland, devoting her considerable intellect, courage and energy to safeguarding her daughter’s inheritance by using a deft mixture of cunning, charm, determination and tolerance.

The last serious biography of Marie de Guise was published in 1977 and whereas plenty of attention has been paid to the mistakes of her daughter’s eventful but brief reign, the time has come for a fresh assessment of this most fascinating and under appreciated of sixteenth century female rulers.

This is superb biography about a woman who you would expect to hear more about, but hear she looks to have been bought out of the shadow.

Clegg deserves a great deal of credit for bringing Marie out of the shadows into the light of day. She truly was one of the most extraordinary women of the Renaissance and, while not native to Scotland, she clearly cared deeply for her adopted country and did her best to govern it as effectively as possible under incredibly difficult circumstances. I’d definitely recommend this book to others.

It’s brilliant and all of the Tudor/Stuart history lovers out there HAVE TO read this... his brings to life, the story of the Mother of Mary, Queen of Scotland, the woman who stood against the Protestant reform in Scotland. The Queen Mother. She is such a misunderstood character but this book shows her true skill: she was a capable and smart ruler, smarter than all the man who surrounded her. Great read guys.

I loved discovering how Marie became this strong & courageous figure that was devoted to protecting her daughters (Mary Queen of Scots) birthright after James V died.

A fantastic gilmps into the life of the mother of Mary Queen of Scots.

As featured in author highlights

Melanie Clegg’s biography on Marie de Guise is most definitely history at its best. It has everything in a biography that I could wish for so much so that I didn’t want it to end and I certainly didn’t want to say goodbye to Marie. Since reading this biography Marie has now become one of my favourite historical female figures.

The last thing I would like to say about this book is that I would highly recommend it to anyone who is interested in this period of history, wanting to learn more about events that occurred then or simply want to find out and learn about such a kick-ass historical female figure. This book will definitely be on my top read favourite books of 2017.

Check out this video review, as featured on Lil's Vintage World YouTube Channel.

Despite the title, Clegg's book is in fact a fairly conventional biography - and as biographies of de Guise are in rather short supply, it's one that's most welcome.

The last serious biography of Marie de Guise was published in 1977 and whereas plenty of attention has been paid to the mistakes of her daughter’s eventful but brief reign, the time has come for a fresh assessment of this most fascinating and under-appreciated of sixteenth century female rulers.

Mary, Queen of Scots, is one of the most famous and iconic monarchs the world has ever known. Less famed but no less formidable was her mother, Marie de Guise. When a brief courtship with Henry VIII came to nothing, this worldly, wily woman married James V of Scotland, and after only four years of marriage, would go on to rule the nation as a widow. Marie's story is often a footnote in the life of her daughter, yet it was thanks to her political wheeler-dealing, shrewd cunning and sheer charm that Mary made it to the hotly-contested throne at all.

From Marie's childhood at the glittering court of the Lorraine dynasty - alive with the intrigue, scandal and glamour - to her grave at Reims, Clegg brings this remarkable woman vividly back to life. Her passion for the era is evident and her investigation into the blazing feud between Marie and the Tudors shows a keen and evocative eye for drama. This is not just a biographical account of Marie de Guise's life, however, as Clegg also includes a fascinating look at how the queen regnant influenced Renaissance art and architecture. A selection of photographs from the author's own collection and other sources illustrate not only this influence, but also the players in this remarkable tale.

The book is opened by a dramatis personae that will prove handy to those who might be new to some of the characters, and Clegg writes with an informative, entertaining and enthusiastic tone that draws her readers straight into the heart of the story. Marie de Guise has not been the subject of a complete biography in almost 30 years, and Melanie Clegg has more than made up for lost time with Scourge of Henry VIII. This is a book that will fascinate anyone who loves a simmering, twisting tale; it's a pleasure to see Marie finally heading the bill.

All About History, December 2016

Whilst Mary, Queen of Scots is a familiar historical figure her mother, Marie de Guise, is relatively unknown. The historian and blogger Melanie Clegg delves into the relationship de Guide had with her French family, The Lorraines, with imaginative fervour which sees this lively biography often stray into the realms of fiction.

As someone who has always been fascinated by history, and in particular the Tudors, this biography of Mary de Guise is more of an historical textbook, and fills in an enormous number of gaps in what we know about Mary Queen of Scots. I don't believe people will ever tire of reading about this dynasty, and Melanie's relaxed style seems almost suited to novel writing. If only school history texts had been this readable back in the 1950s!

As featured in as BOOK OF THE MONTH

As featured on Goodreads Rated 5 Stars!