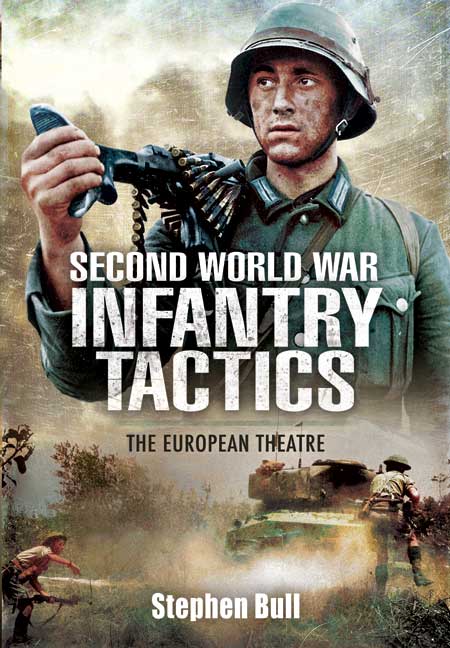 Click here for help on how to download our eBooks
Add to Basket
Add to Wishlist
You'll be £4.99 closer to your next £10.00 credit when you purchase Second World War Infantry Tactics. What's this?
Need a currency converter? Check XE.com for live rates

The ‘poor bloody infantry’ do the dirty front-line work of war. It bears the brunt of the fighting and often suffers disproportionately in combat in comparison with the other arms of service. Yet the history of infantry tactics is too rarely studied and often misunderstood.

Stephen Bull, in this in-depth account, concentrates on the fighting methods of the infantry of the Second World War. He focuses on the infantry theory and the combat experience of the British, German and American armies. His close analysis of the rules of engagement, the tactical manuals, the training and equipment is balanced by vivid descriptions of the tactics as they were tested in action. These operational examples show how infantry tactics on all sides developed as the war progressed, and they give a telling insight into the realities of infantry warfare.

His study sets Second World War infantry tactics in the long historical context. It records how the artillery and automatic weapons of the First World War swept away the lines and columns of the nineteenth century. It goes on to describe the tactics of
the main protagonists in 1939-45, looking in particular at the infantry’s role in blitzkrieg and at the growing significance of sections and squads. And it emphasizes the increasing importance of combat in urban areas – in buildings, sewers and rooftops – which evolved through the experience gained in bitter protracted urban battles likeStalingrad.

Stephen Bull’s accessible and wide-ranging survey is a fascinating introduction to the fighting methods of the opposing ground forces as they confronted each other on the European battlefields of 70 years ago.

Anyone wishing to take the study of military history and warfare seriously really needs to get into the detailed mechanics of how an army operates. A key feature is how the vital army, infantry, operates and how this compares with other protagonists. Of course, studies of tactics are not unknown but often one needs to study a wide range of official manuals and guides which can be heavy going, or difficult to find. (Even the author says, in the preface, that to read too many in isolation can lead to 'ennui... [and] severe mental indigestion'). It is also easy to dismiss 'tactical failure' – usually in criticism of the British Army against the German Army in World War Two but this is sometimes not fully expounded and can rest on popular perception rather than actual analysis.

Stephen Bull has written several short monographs for Osprey on certain tactical aspects of operations in World War Two of considerable value; this volume allows space for further analysis (and is in a sense a companion piece to his volume on Commando Tactics from 2010). To allow depth, the sample is deliberately restricted to the key protagonists in the West; Britain America and Germany.

The structure is of a general Preface; a discussion on 'The Human Resource' in the round, then three chapters on German, American and British tactics. Two chapters take an overview of Fighting in Built up Areas and Tank/Infantry Co-operation, then a Conclusion. There are Appendices of basic unit organisation and equipment, the last of which is a small gem in itself; a reproduction in full of a British Army appreciation of German small unit tactics from 1941 - “German Infantry in Action”.

A great strength of the book is how it identifies and follows tactical evolution during the war, naturally a constant and incomplete process and influenced by technical innovations and practical experience. One small illustration; Americans, especially in Normandy, criticised the British for tactical timidity. This was usually tempered by claimimng that fear of losses was informed by senior officers' experience on the Western Front in World War One/. Yet one explanation may be more applicable; despite an innovator in armoured warfare, the British lacked an equivalent of the small, fast, all-terrain troop carriers such as the German Hanomag or the American M3. This would only truly be addressed – in the face of experience by using obsolete tank hulls without the turrets, so-called 'Kangaroos' pioneered by the Canadians.

The section in the British chapter discussing the advent of the 'battle school' is of particular value – this remains a source of debate between those who advocate that it drove British tactics too much towards drills, and others stating that it was a vital element in transforming a citizen army into an effective force.

This is not a dry treatise based purely on the manual; Dr Bull takes full account that drills may strive for best practice, but this is rarely the complete reality. He also points out, quite correctly, that the quest for the 'perfect' solution is unattainable due to the human element. The bedrock is as he terms it 'a raft of common notions' rather than the slavish application of drills. This is an outstanding piece of synthesis and argument which never loses sight of the practical reality against the theoretical possibility. We can hope that this superbly researched and assembled volume is not the last in the series; if Dr Bull does not speak Italian, this reviewer would urge him to, to address the Western Desert! A highly recommended purchase.

An accessible and wide-ranging introduction to the fighting methods f the opposing ground forces as they confronted each other on the European battlefields of 70 years ago.

Curator of military history and arcaheology for Lancashire Museum's, Stephen Bull's insight into the fighting mehtods of the Second World War is a blistering and in-depth account. The 'poor bloody infantry' traditionally do the dirty work of war, bearing the brunt of the fighting and often suffering disproportionately. Bull's wide-ranging survey is a fascinating introduction to the fighting methods of the opposing ground forces as they confronted each other on the battlefields.

Dr Stephen Bull is currently Curator of Military History and Archaeology for Lancashire Museums. He has previously worked at the National Army Museum, and for the BBC in London. He is the author of more than twenty military and historical titles published in Europe and the US, and he has appeared in the TV series Battlefield Detectives. Among his many publications are An Historical Guide to Arms and Armour, Volunteer! The Lancashire Rifle Volunteers 1859-1885, Brassey's History of Uniforms: World War One British Army, World War I Trench Warfare, Encyclopedia of Military Technology and Innovation, World War II Infantry Tactics, World War II Jungle Warfare Tactics and Commando Tactics: The Second World War.