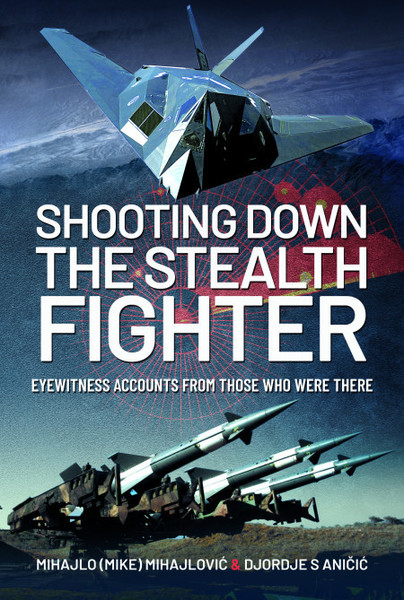 Shooting Down the Stealth Fighter (Hardback)

Eyewitness Accounts from Those Who Were There

Add to Basket
Add to Wishlist
You'll be £25.00 closer to your next £10.00 credit when you purchase Shooting Down the Stealth Fighter. What's this?
+£4.50 UK Delivery or free UK delivery if order is over £35
(click here for international delivery rates)

With its futuristic and unmistakable design, the Lockheed F-117A Nighthawk, the so-called ‘Stealth Fighter’, was the wonder of the age. Virtually undetectable by radar, this ground-attack aircraft could slip unseen through enemy defences to deliver its deadly payload on unsuspecting targets. Its effectiveness had been well demonstrated during the Gulf War of 1991, during which the F-117A achieved almost legendary status. But, at 20.42 hours on 27 March 1999, the military and aviation worlds were stunned when the impossible happened – a virtually obsolete Soviet-built surface-to-air missile system which had first been developed more than thirty years earlier, detected and shot down an F-117A, callsign ‘Vega 31’.

This incident took place during the NATO bombing of Yugoslavia during the Kosovo War. It was, and remains, at least officially, the only time that a stealth aircraft was detected and shot down by a ground-based missile system.

In this book the authors, both of whom served in the Kosovo War, take the reader through every moment of that astounding event, from both the perspective of Lieutenant Colonel Dani’s 3rd Battalion, 250th Air Defence Missile Brigade, a Yugolsav Army unit, and that of the pilot of the F-117A, Lieutenant Colonel Darrell Patrick Zelko, who ejected and survived the loss of his aircraft. The reader is placed in the cabin of the missile fire control centre and alongside ‘Dale’ Zelko in the cockpit of his stealth fighter as each second dramatically unfolds.

Stealth characteristics are now regarded as a standard part of modern military aircraft design but with each generation of aircraft becoming increasingly, almost cripplingly, expensive to produce and operate compared with the simpler surface-to-air defence systems, the outcome of the battle between missile and stealth hangs in the balance. That this is the case might be seen in the strange fact that it is claimed that two other F-117As did not return to the U.S. at the end of the Kosovo War, though, mysteriously, their fate has never been revealed. Were they too victims of Yugoslav missiles?

Though intended for the general reader, Shooting Down the Stealth Fighter covers the technical details of the weapons involved and their deployment – and the authors should know, as one of them, Djordje Anicic, was a member of the Yugoslav team which brought down Zelko’s aircraft.


An astonishing account of how the Stealth Fighter, which seemed as though it might be invincible, was actually shot down in many theatres of recent war...

A fascinating book covering the shooting down of a USAF F117 Stealth fighter during the war in the Balkans.
The book is very technical, full of interesting military detail about the anti-aircraft radar/missile systems used by the Serbians, and stealth aircraft technology. Lots of illustrations to explain the various systems and procedures.
It came as a shock to the military world to find that a primitive radar system could track, and enable missiles to shoot down, an 'invisible' aircraft.
I was astonished to learn that a B2 stealth bomber was also believed to have been shot down by the Serbians, but because it crashed in a friendly area, the USAF was able to sanitise the crash site and remove/destroy all evidence and traces of the crash.
I can thoroughly recommend this book to military and aviation enthusiasts.

"I highly recommend this book to anyone with an interest in Stealth technology, employment, the defences against it, and the Yugoslavian conflict."

Extremely interesting reading with information I never knew before.
If you are fans of military history then you can’t go wrong with adding this to your reading list.

The story of how the 250th Air Defense Brigade of the Yugoslav Army in 1999 shot down an F-117 Night Hawk. In 1999 the N.A.T.O. air campaign against the Federal Republic of Yugoslavia was having the expected effect, overwhelming technical superiority was well overwhelming the Yugoslavian military and destroying targets at will.
The F-117 was the world first "Stealth" aircraft purported to be invisible to radar. It would come as quite a shock to Lt.Col. Dale Zelco flying the F-117 in question when Battery 3 of the 250th Air Defense Brigade fired the obsolescent Surface to Air Missiles and he would end up hitting the silk as pilots used to say. Well worth reading and thinking about in todays threat environment.

Lieutenant Colonel Aničić has more than 25 years of extensive experience serving in every role of the SAM-3 NEVA missile systems, from operator to commander. He was deputy commander of the 3rd Battalion, 250th Air Defense Missile Brigade and was one of the commanders in the combat shift that shot down the F-117A. He is the author of Smena (The Shift), an authentic war diary describing the day-by-day events of the 3rd Battalion during 78-days-long war.

Mike Mihajlović is a professional engineer and physicist with more than 25 years of experience. He is a specialist in military technology, in particular weapons systems, missiles, radars and camouflage. His area of specialties includes radar countermeasures and design of decoys. As a unique situation, he was member of the Yugoslav armed forces during the conflict and later, after emigrating to Canada, he was also member of the Canadian Armed Forces (officer), Electrical and Mechanical Engineers Branch, and served in Afghanistan. Mike is the author of several books and articles related to the stealth technology, radar engineering, missile engineering and similar subjects.