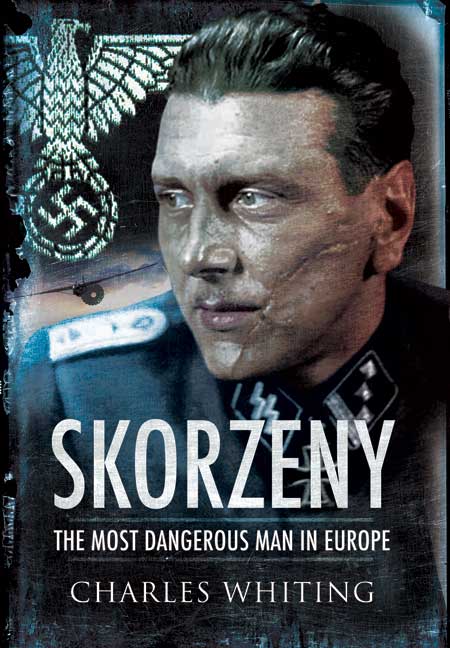 The Most Dangerous Man in Europe

Add to Basket
Add to Wishlist
You'll be £12.99 closer to your next £10.00 credit when you purchase Skorzeny. What's this?
+£4.50 UK Delivery or free UK delivery if order is over £35
(click here for international delivery rates)

Skorzeny was one of the most daring figures of the 20th Century. His exploits included the rescue of Mussolini from his mountain prison, a brief affair with Eva Peron, a blackmail attempt on Winston Churchill and the kidnapping of the son of the wartime dictator of Hungary. Eisenhower declared him "The most wanted man in Europe". Charles Whiting, who actually met Skorzeny, pieces together this truly remarkable story.

Charles Whiting wrote his first novel in 1953, aged just twenty-six. He went on to become the world’s most prolific author of military books; he has sold in excess of three million in the Uk alone, and his collective works number around 200. Charles also lived abroad for thirty years working in German chemical factories, US fashion companies, newspapers, magazines, universities – as an associate professor and lecturer – and a long spell in the US army. He died in 2007.

Otto Skorzeny's description as 'the most dangerous man in Europe' was a moniker suggested by General Eisenhower in 1944, and it's easy to see why given the notorious Austrian's World War II exploits. Plots to kill Roosevelt, Churchill and Stalin were the most famous of antics which would also include blackmail, sabotage, the rescue of fascist leader Mussolini from a mountain prison, and most oddly, a brief affair with Eva Peron. Skorzeny was a key figure in the Nazi regime and widely regarded as one of the most daring figures of the twentieth century, and Charles Whiting's biography attempts to provide intimate insight into the man himself. The author even provides details of several meets with Skorzeny, which themselves are compelling in their clandestine nature, on account of Skorzeny still being wanted by German authorities at the time of his death. Through the rest of the book we learn of Skorzeny's involvements throughout the war period and how his actions had huge influence on its course; yet in this intrinsically focussed account it feels as if the wider events of the war itself are merely incidental in relation to the presence of a man who, based on Whiting's first-hand knowledge and research into his personality, would clearly have enjoyed it that way. For this was a man who liked to be centre-stage and he is certainly given that platform here - Whiting covers the 'highlights' of Skorzeny's career in such colourful detail as to include specific dialogue and subtle scene-painting akin to an adventure novel. That, at the author's own admission, not all of it may be true is typical of Skorzeny's character; however this in no way makes his story less engaging.