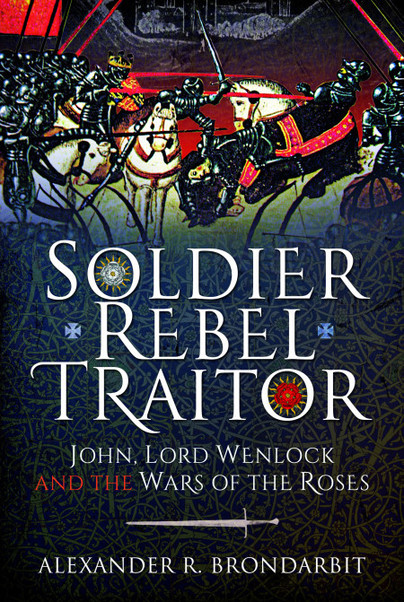 Add to Basket
Add to Wishlist
You'll be £19.99 closer to your next £10.00 credit when you purchase Soldier, Rebel, Traitor. What's this?
+£4.50 UK Delivery or free UK delivery if order is over £40
(click here for international delivery rates)

An inherently fascinating and impressively informative historical biography that is especially recommended for community and academic library British History and Military Biography collections and supplemental curriculum studies lists, "Soldier, Rebel, Traitor: John, Lord Wenlock and the Wars of the Roses" is further for students and academia with the inclusion of maps, a list of abbreviations, a glossary, twenty-two pages of notes, a ten page bibliography, and an eight page Index.

This well-written biography provides a window into the complex world of the Wars of the Roses. Alexander Brondarbit clearly has a grasp of the period, and he fits Wenlock into it despite a lack of straightforward sources; that is quite an achievement. This is also a relatively slim volume, yet Brondarbit packs it with context and detail without losing sight of his subject. Even if you are not a student of the Wars of the Roses, you should still enjoy this biography; Wenlock was a complicated man living in turbulent times. For Wars of the Roses students, the bibliography alone is worth your investment, and the book is well worth reading for its insight into the politics of 15th Century England.

Very much a many of many talents or wearer of many hats John Wenlock war is primarily known as very much a military man at heart. Fighting in a number of battles and skirmishes during the Wars of the Roses he would eventually be killed at the Battle of Tewkesbury 1471. It would turn out that Wenlock was very much a major player during Henry V’s reign, but would also serve other kings and major players of the time.

The author Dr Alexander Brondarbit has done a really good job in writing this book a very clear, descriptive and informative text. As someone who is relatively new to this period of history, the author wrote the book very well and was very easy to read and whereas in some other books the people can be various this was very easy to understand and clear. In fact, it just makes me want to read more about this period of history. I would certainly recommend this book to others as it was a really good read, and I would have thought those that are more into this period than me would enjoy the book too.

In all, a very good read for anyone interested in one of the periods important figures.