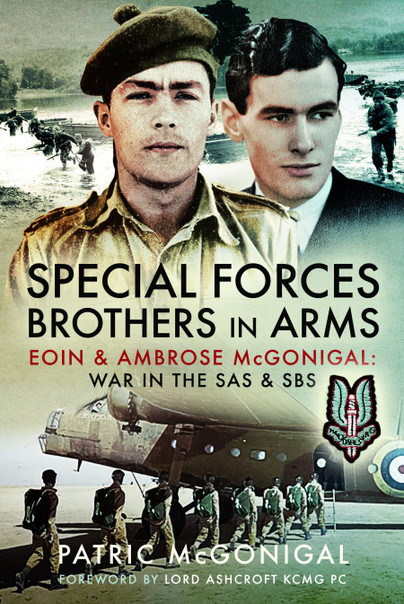 Eoin and Ambrose McGonigal: War in the SAS and SBS

Click here for help on how to download our eBooks
Add to Basket
Add to Wishlist
You'll be £9.98 closer to your next £10.00 credit when you purchase Special Forces Brothers in Arms. What's this?
Need a currency converter? Check XE.com for live rates

The McGonigal brothers, Eoin and Ambrose were fiercely independent characters. Born and educated in southern Ireland to a catholic family but raised in Belfast, they wasted no time in enlisting at the outbreak of War in 1939. Both outstanding sportsmen, their leadership potential was quickly recognised.

Eoin was one of the first two officers selected from an Irish regiment for Commando training in 1940. After leading a troop at the River Litani battle in Syria, he became the youngest of the original officers selected for the fledgling SAS and quickly made a name for himself. Tragically, he was lost after parachuting behind enemy lines in Libya. His body was never recovered and many unanswered questions remain today.

Ambrose, having carried out multiple coastal raids with the Commandos and winning two Military Crosses, later led operations for the SBS in Yugoslavia and Italy. Post-war, he had a short but notable legal career as a Lord Justice of Appeal in Northern Ireland at the height of the Troubles.

Light is also shone on the brothers’ close friend, the legendary Blair Mayne and the controversial decision to downgrade the award of his Victoria Cross.


This is an interesting and exciting first book by Mr. McGonigal. Its subject is his Grandfather, Ambrose McGonigal, known to many who served in Northern Ireland as one of the few Catholic Judges the IRA didn’t manage to murder, and Ambrose’s brother Eoin. These two brothers, both lawyers by profession, were early members of Special Forces in the British Army, Eoin in the SAS, and Ambrose the SBS... The author has done extensive research using official and unofficial documents, letters, conversations with those who were there, as well as family memories.

Highlight: 'This is an analysis of two very important soldiers that clearly originates from a place of passion and family pride. It is a must-buy for special forces fans.'

This is an excellent book. Not a constricted biography of the brothers but includes detailed information on the development of Commandos and L Detachment of the SAS from the start, including the dreadful operation where so many were killed, injured, or captured. Paddy Mayne’s role in the commandos, SAS and how he mourned the loss of a close friend and fellow soldier and how he tried to solve the riddle of his disappearance are given significant attention. Ambrose’s role and times in the SBS is very useful additional material on the activities of the unit of which more is still to be unravelled.

Patric McGonigal was born in Dublin. Once described as a Celtic warrior in a suit, he is an international disputes lawyer. A modern nomad, he has lived and worked in New York, Hong Kong, Shanghai, London, Singapore and Tokyo. Married to Tami, with two grown-up children, this is his first book.