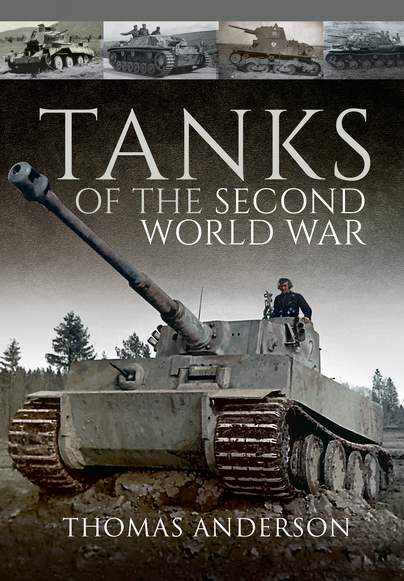 Click here for help on how to download our eBooks
Add to Basket
Add to Wishlist
Get Tanks of the Second World War (Kindle) for FREE when you purchase 2 other eBooks.
Need a currency converter? Check XE.com for live rates

This book lists all the important tanks used in the Second World War, both by the Allied (England, France, Russia and the USA) and Axis Powers (Germany, Italy and Japan). Thomas Anderson, an expert on the history of the Second World War, offers an in-depth volume detailling the vehicles, their use in battle and relevant technical specifications. This comprehensive survey is full of authentic eyewitness accounts as well as being profusely illustrated with many photographs having never been published before.

A work simply curious and interesting, with a file of photographs in black and white that are on many occasions the "crème de la crème".

This handsome, large-format hard-cover book contains information about all of the turreted tanks of every nation that fought in World War Two. It does not try to cover other types of vehicles like tank destroyers, but by focusing only on tanks the author has managed to give a comprehensive, satisfying picture of these vehicles.

Eyewitness accounts and eye-popping photos, including many images said to have never been seen in print before, drive the author’s informative narrative tracking British, French, Russian, U.S., German, Italian and Japanese tanks.

Beginning with a prologue of World War I and between-the-wars developments, the history of tanks is traced to the beginnings of WWII. A coffee-table overview of armored fighting vehicles.

A very thoughtful look at how tanks developed from their genesis in World War I, through the inter-war years to the main battle tanks of World War II.

A nice work for photographic reference, or as an introductory book for somebody just getting interested in tanks.

This book is a great one for tank newbies, but also for us unofficial tank gearheads. The book is filled with many wartime photos, but also shows many one of a kind tank designs. So through the book you really get a sense of the sometimes halting design path to nowadays main battle tanks.

This is a must for anyone with a healthy appetite for a wider understanding of how the tank developed through the Second World War.

The photo coverage in the book is very extensive and shows all the tanks used by the different countries in WWII and also even in the earlier Spanish Civil War.

This book will be of great interest to military enthusiasts and historians as well as modelers.

A beautifully presented chronological history of the tank during the Second World War. To set this subject into context, it also pays considerable attention to the Great War origins of the tank, the developments of the 1930's and not just those of the major belligerents but also the Poles and Czechs whose contributions are often overlooked, and the next generation of designs which emerged during the post war period. As a very considerable number of variants were produced for each model during the Second World War, it would be a quite enormous book which attempted to describe them all, and so Thomas Anderson focuses on the most important of these developments, briefly describing each along with their technical specifications. Yet this is above all else a photographic history, consisting throughout of large, clear and carefully selected images, many of which have never been published before.

The tank dominated land warfare during WWII and the author has provided not only a very able and well-illustrated account of this, but also provided an excellent genesis of the tanks
and a description of how WWII tank technology and tactics have influenced post WWII tank warfare. The clear and impressive text is fully supported by lavish illustration with contemporary photographs, most highly recommended.

The whole book is heavily illustrated and the bulk of these archive photos have not been published before, and all come with informative captions. Many have details that modellers will particularly like and some offer some excellent diorama ideas as well.