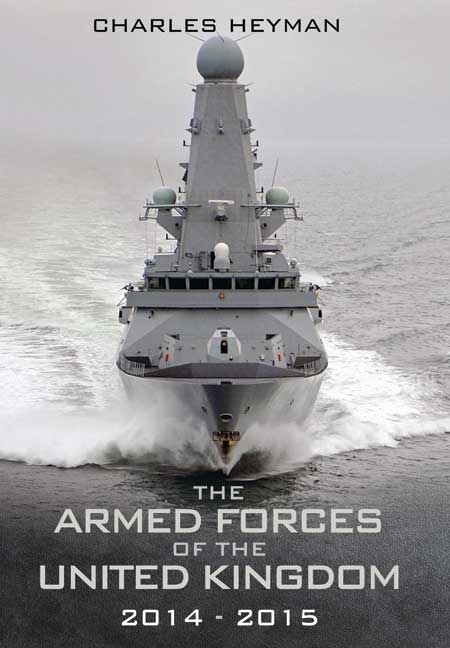 Click here for help on how to download our eBooks
Add to Basket
Add to Wishlist
You'll be £4.99 closer to your next £10.00 credit when you purchase The Armed Forces of the United Kingdom 2014-2015. What's this?
Need a currency converter? Check XE.com for live rates

This book has been published at regular intervals during the last 20 years, and the latest 2014 – 2015 addition is the one that deals with the most far reaching changes the UK Armed Forces have gone through for a generation. Although the UK's Armed Forces are reduced in size, the UK remains the country with the fourth largest defence budget in the world and extensive international commitments. This remains an extremely potent defence force and arguably the most powerful in Europe.

The Royal Navy has new submarines, new destroyers and a Type 26 Global Combat Ship in the pipeline, with two new aircraft carriers and F-35 attack aircraft by the end of the decade. The Royal Air Force consolidates its Typhoon force, introduces new air to air refuelling aircraft, new transport aircraft and extra helicopters.

The Army sees the most extensive organisational changes with a complete reorganisation of the Divisional and Brigade structures following the commencement of the withdrawal of Land Forces from Germany. Major armoured and infantry units are restructured to better cope with the challenges of the new operational environment.

With a new Joint Forces Command that brings together the combat power of the three armed services, the UK is better positioned to engage in the expeditionary operations the UK government and its allies may wish undertake in the future.

By 2020 the majority of capability enhancements and formation reorganisations will be complete, and this informative publication is the best guide available to the size and shape of the UK Armed Forces during the next decade.


This little compendium of all things military is from Shropshire's Charles Heyman. It is a rundown of the hardware and organisation of British military forces, with some entertaining extra bits and pieces...and some more sombre information, with a list of British military casualties in the various conflicts and troubles since 1945...packs a lot in.

The most comprehensive and up-to-date guide to all British Military organisations and structures that could be wished for, whether by the enthusiast or the professional.