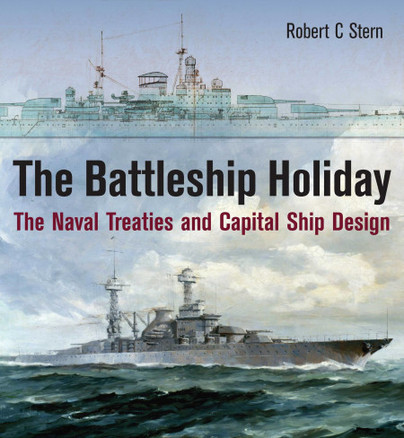 Shortlisted for the 2018 Mountbatten Award for Bes

Shortlisted for the Maritime Foundation's 2018 Mountbatten Award for Best Book. View the full list of this year's nominations here.

You'll be £35.00 closer to your next £10.00 credit when you purchase The Battleship Holiday. What's this?
+£4.50 UK Delivery or free UK delivery if order is over £35
(click here for international delivery rates)

Even as the First World War was ending the victorious great powers were already embarked on a potentially ruinous new naval race, competing to incorporate the wartime lessons and technology into ever-larger and costlier capital ships – still seen as the ultimate arbiters of sea power. This competition was curtailed by the Washington naval treaty of 1922, which effectively banned the construction of such ships for years to come, and mandated the scrapping of those under construction. This ‘holiday’ was to have profound effects on design when battleship building was renewed in the 1930s, as later international agreements continued to restrict size and firepower.

This book investigates the implications of these treaties on technical developments, contrasting the post-war generation of ships that were never completed – or never even ordered – with the new designs of the 1930s, revealing just how much progress had been made in areas like fire control and armour despite the hiatus. An analysis of how well these modern ships stood the test of war concludes this intriguing and original contribution to the literature – a book that is certain to fascinate anyone interested in the final era of the big-gun at sea.

A highly recommended book, which can not be missed in the library of any enthusiast and scholar of this interesting and fundamental topic.

The book is an interesting read and all readers will learn from it. It is attractively produced and very well illustrated and a worth addition to any naval library.

Overall, this book is a treasure trove of information. Very well written and technically detailed but not too dry, it is one of the best books I have read on the development of battleships and the attempts by politicians to effect limitations. It well illustrates the politicians' forging on regardless of the military requirements and the developing political situation. It provides an excellent narrative of the politics surrounding the issues as well as the continuing efforts of naval personnel and designers to cram as much as possible into a politically limited hull size. Combined with an analysis of the battles and finishing with an account of the last battleships and their fate, it is a must have for the naval enthusiast as well as a great read for the general reader. It is very strongly recommended.

It is a fascinating story for the reader who is interested in this particular subject.

Overall the book provides an interesting take on the story of the battleship from a different perspective with some interesting points. There is plenty here both for the naval historian and the amateur. It is very well illustrated and presented with an impressive number of black and white photographs, sketches, plans and diagrams throughout.
This book is strongly recommended.

This is a serious historical work that in one volume adds considerably to the body of knowledge of the era. It has been worth the wait and is worth the price.

This book by Robert Stern follows many other very good books by the same author. What would have happened if the naval treaties signed after WW1 had not taken place? We know most nations had some grandiose plans, but that collectively none could really afford them, nor for the naval race to continue. Naval officers wanted to ensure they were not left behind, yet understood that some sort of arrangement would have to take place because of the financial strife each nation was finding itself in with huge debts left over from the war. The result is well covered by the author as he discusses what was projected, what was feasible, and what actually transpired. It was a time of a great depression, of social turmoil following the war, yet remaining distrust of former enemies and allies alike. The book is extremely good reading and is highly recommended. I give it ★★★★★ stars for its readability and subject matter.