From Defence to Attack

Click here for help on how to download our eBooks
Add to Basket
Add to Wishlist
You'll be £4.99 closer to your next £10.00 credit when you purchase The Biggin Hill Wing 1941. What's this?
Need a currency converter? Check XE.com for live rates

This book is an in-depth study of England's most famous fighter station during the year of the Battle of Britain. It looks at the political upheaval within Fighter Command that saw the removal of Dowding and Park and their replacement by Sholto Douglas and Leigh-Mallory. The ongoing 'Big Wing' controversy and the resulting change in tactics during 1941 are examined. The main part of the book is a chronological account of the squadrons of the Biggin Hill Wing with particular emphasis on the pilots. The units covered include Nos 66, 72, 74, 92, 124, and 609 Spitfire Squadrons and 264 Defiant Night Fighter Squadron. The author's research is based on combat reports and squadron Operation Record Books and first-hand accounts written by the participant pilots in the battles over southern England and northern France. Extensive appendices will include Air Combat Claims of the Wing, Operational Aircraft Losses, Details of Selected Operations and The Great Escape - the marked influence of ex Biggin Hill pilots on the escape from Stalag Luft III in 1944.

Well-written and with the “serious work” interspersed with moments of humour and high jinks typical of RAF aircrew, The Biggin Hill Wing 1941, is a wonderful look at one airfield’s, and its resident squadrons’, contribution to Fighter Command’s broadening priorities. 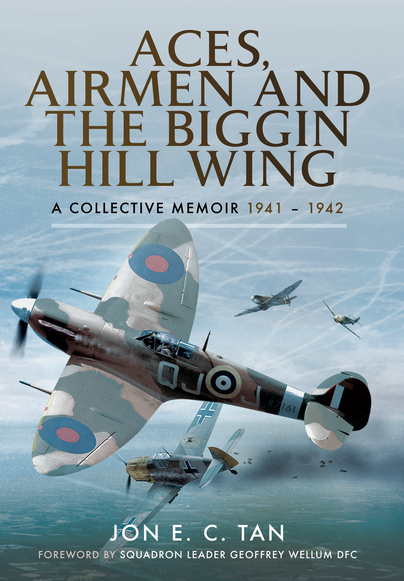 During the Second World War, RAF Biggin Hill was one of Fighter Command's premier stations. Throughout the Battle of Britain and beyond, it became a hotbed of talent and expertise, home to many of the Command's most notable and successful squadrons. Both on the ground and in the air, Biggin Hill had a formidable reputation and its prowess was very much built on a partnership between air and ground personnel, including squadron members, specialist engineers, armourers and other ground-crew. This fascinating new book from Jon Tan offers a rich account of the years 1941-1942, an incredibly varied…

Click here to buy both titles for £9.98
More titles by Peter Caygill
eBook