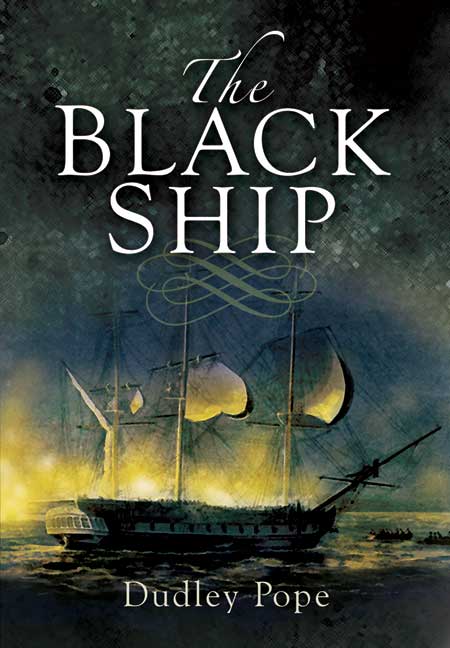 Click here for help on how to download our eBooks
Add to Basket
Add to Wishlist
You'll be £4.99 closer to your next £10.00 credit when you purchase The Black Ship. What's this?
Need a currency converter? Check XE.com for live rates

Dudley Pope meticulously researches the story of the bloodiest mutiny in the history of the Royal Navy - the butchering of the officers aboard His Majesty's Frigate HERMIONE 32 guns, in the West Indies in 1797. The captain of the frigate, Hugh Pigot, was a brutal and sadistic commander who flogged his men mercilessly and drove them beyond the limits of endurance. However, nothing could excuse the slaughter of guilty and innocent officers alike as the mutineers went wild and committed crimes beyond anything Pigot could have dreamt up. Not content with that, they then took the ship into an enemy port and gave her up to the Spanish who, unaware of the true facts for some time, nevertheless greeted them with the contempt they deserved. The Spanish took the ship into their service but due to an amazing episode of red tape and internal wrangling, never actually got the frigate to sea. Meanwhile the Royal Navy relentlessly hunted down the mutineers over the next ten years and of the 33 either caught or who gave themselves up, 24 were either hanged and hung in chains upon gibbets, or transported for life. A number managed to escape justice. The author describes these events which end with the daring re-capture of the HERMIONE under the guns of Spanish forts, with Captain Edward Hamilton leading 100 English sailors in six open boats in one of the most brilliant cutting-out expeditions in naval history.

Anyone familiar with British naval history has probably come across the frigate Hermione. The bloodiest mutiny occurred aboard this vessel in October 1797.

The author covers the people and events leading up to the mutiny, as well as its aftermath in twenty-eight chapters. The book includes five appendices (The Effect of a Flogging, Floggings ordered by Captain Wilkinson in the Hermione, Floggings ordered by Captain Pigot in the Success, The Men Active in the Mutiny, and Recorded trials for mutiny in the Royal Navy for 1798), notes and bibliography, and an index. Various types of illustrations accompany the text. Aside from the mutiny, the book also mentions quite a few privateer incidents involving the Hermione.

Interesting facts and the men’s accounts of what transpired make this a compelling read.