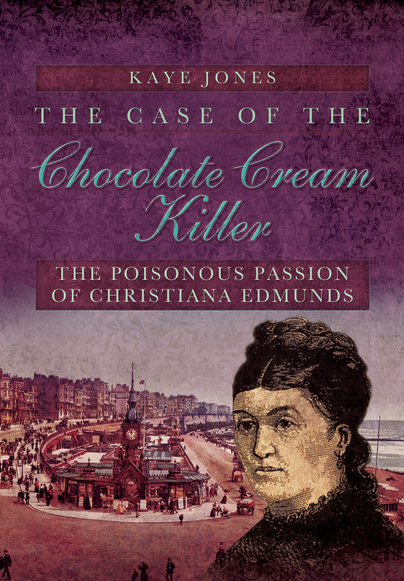 The Case of the Chocolate Cream Killer (Kindle)

The Poisonous Passion of Christiana Edmunds

As featured in Andover Advertiser: Saxonfields author publishes The Case of the Chocolate Cream Killer.

You'll be £4.99 closer to your next £10.00 credit when you purchase The Case of the Chocolate Cream Killer. What's this?
Need a currency converter? Check XE.com for live rates

“The trial which terminated yesterday…revealed one of the strangest and most horrible stories possibly ever told in a court of justice.” (Morning Post).

When the news broke in 1871 of a series of mysterious poisonings in Brighton, shock and horror gripped the Victorian public. Even more disturbing was the revelation that the culprit was not a common criminal but rather a local 'lady of fortune' called Christiana Edmunds.

From March 1871 Christiana had sent out dozens of poisoned chocolates and sweets to Brighton’s residents. Her campaign resulted in the death of four-year-old holidaymaker Sidney Barker, and wounded countless others. Her arrest in August 1871 provoked such an emotional response from the local public that her trial was moved from Brighton to London’s Old Bailey.

The prosecution anticipated an easy victory. Christiana had not confessed, but witnesses confirmed that she had purchased strychnine and their testimonies placed her at the scene of the crimes. She had a motive too, argued the prosecution; she was a scorned woman. Despite the best efforts of the defence, the jury took only one hour to convict her of the murder of Sidney Barker and the attempted murder of three others. In a last dramatic twist, Christiana was reprieved after being declared insane by the Home Office and lived out her days in Broadmoor.

Alongside Christiana’s case, the book will offer a snapshot of life in Brighton, one of Victorian England’s busiest and most popular leisure resorts. However, this wholesome holiday destination also had a steamy underworld of sexual licence, which reached even seemingly secure middle-class young women.

This is a solid, meticulously researched book on a notorious 19th century British female killer.

This non-fiction book tells the story of Christiana Edmunds, who poisoned many people in Brighton during the Victorian era.

The book starts in the early 1800s with Christiana's father's background and profession. The reader is given fascinating glimpses into life in those days, both at home in the mother's domain, and in the husband's world of work. Most striking to me was how precarious everything was if business went badly, or poor health interfered with earning abilities. Syphilis is considered to have played a part in this family's history, and the far reaching effect of this is fascinating to read about. The story then moves to focus more on Christiana, and how and why she starting poisoning people, and the outcome. The book ends with a good round up of what happened to all the main characters. There is also a good bibliography and list of sources at the end.

I enjoyed this book because of the social history it gives about life throughout the 1800s. The book is well written, and provides lots of interesting material about family life, life within prisons and within asylums for the insane, including Broadmoor, together with medical practices of the time. Occasionally I wished for more information about the characters and events, but the author makes it clear when further information is not available.

A good read, and perhaps (as the author says) Christiana is the reason why many of us were told, as children, not to accept chocolate from strangers!

The case of Christiana Edmunds, very well chronicled by Kaye Jones in this book, is strange and compelling, but ultimately it is Edmunds herself who is the centre of interest and for me sets this book on a different level to the usual true crime fare. She was insane, but is it the nature of her insanity that is so interesting. That she felt no emotion or regret about the things she did is almost understandable these days and is said about most serial killers, but Christiana also had no interest in anyone else. She was the only person who mattered. In Broadmoor she practiced deceit on a grand scale and in many instances her attempt to deceive the staff was for no purpose other than to break the rules. Kaye Jones says that in recent years Christiana has been diagnosed as suffering from Narcissistic Personality Disorder, which was a new illness to me.

A work that is fully referenced and with a significant bibliography that ensures the tale is not some Victorian 'penny dreadful' designed to shock but a work of some scholarship determined to get to an understanding of the dreadful deeds of Edmunds...

... Never underestimate the determination and commitment needed for the two years of research and delving that has gone on to produce the work. This book is well written, contains considerable information on poisoning and mental health and flows along at a cracking pace. It is an excellent read even of for those who do not normally spend time with 'true crime'. Through the book life and society in Brighton come to life. This is an excellent book by a young writer making her way.

Absolutely gripping tale of murderous passion and insanity, I couldn't put it down.

A brilliant read the ethos of the era was captured perfectly and the information in the book is very interesting. I thoroughly enjoyed reading this and will be watching for more books by Kaye Jones

Absolutely fantastic read. A really in depth and engrossing look at Christiana Edmund's life. Very readable. Jones writes in a way that really keeps your attention. Chocolate and murder, what more could you want?

Another historical murder/thriller from Kaye Jones. Backed by painstaking research this Victorian drama covers the murderous deeds, subsequent trial and conviction of an educated and respected lady of the era. A great read. Well done Kaye.

In the genteel surroundings of 19th century Brighton, a serial killer is on the loose. Following the death of four-year-old Sidney Barker, an investigation is launched into the almost-unbelievable possibility that the murderer is using poisoned sweets to carry out their deadly campaign. The police investigate a case, which has all the classic elements of crime fiction: murder, madness and chocolate. But this is real life.

‘The Case of the Chocolate Cream Killer’ explores the sinister story of poisoner Christiana Edmund who, fuelled by an unrequited passion, set out on a lethal course of action. Kaye Jones skilfully re-creates Christiana Edmunds’s story with meticulous research and evocative description, taking the reader on a journey into the darker side of Victorian life, through powerful themes such as mental health issues, asylums and substance abuse. It is an excellent book and a must-read for all lovers of Victorian true crime!

' A true account that makes for great reading. But maybe not over a box of chocolates.'

Kaye Jones studied history at the University of Manchester and her dissertation on Victorian murderesses was published shortly after. She has written three titles for the History In An Hour series and is currently working on another book for Pen & Sword which explores the hidden dangers of the Victorian workplace. You can read more about Kaye’s research on her blog and follow her on Facebook and Twitter:
Blog: kayejoneswriter.WordPress.com, Facebook: /kayejoneswriter, Twitter: @kaye_jones