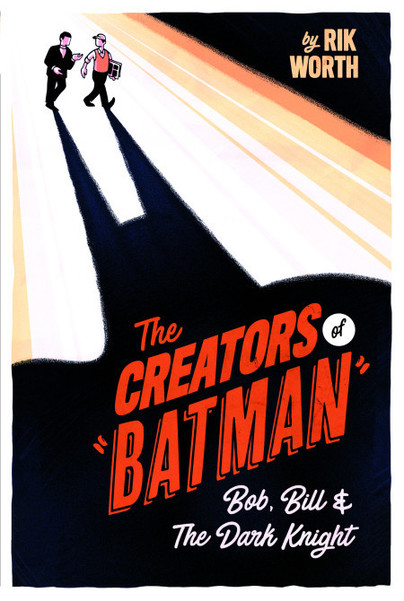 The Creators of Batman (Hardback)

Bob, Bill and The Dark Knight

Add to Basket
Add to Wishlist
You'll be £15.99 closer to your next £10.00 credit when you purchase The Creators of Batman. What's this?
+£4.50 UK Delivery or free UK delivery if order is over £35
(click here for international delivery rates)

In the early days 20th century the emerging medium of comics was beginning to grab the attention of children and adults alike. Then, in the 1930s, superheroes revolutionised the entire industry and culture as we know it. Gotham’s caped crusader, The Batman, swung into this pantheon of demi-gods in 1939 and secured his place as one of the world’s most beloved characters.

But do know who created The Dark Knight? Do you know how artist Bob Kane, placed himself at the secret origins of Batman while his co-creator Bill Finger was forced into the shadows? Do you know how comic creators, journalists, and family members fought to have Finger credited for his work?

The first prose book to focus both on Finger and Kane, as well as cast of supporting characters from one of the most exciting times in comic book history, The Creators of Batman: Bob, Bill and The Dark Knight gathers everything we know about these two monumental figures and lays their stories side by side. Bringing together the story of these two creators against the exciting background of the American comic’s boom and Batman’s Golden Age. It looks at how Finger and Kane constructed the world of Gotham and its denizens, and grapples with the legacy the creators left behind.

A revealing book about a great character that has lived with us for years, but also a great book about the two characters who were behind him and what he was. It’s funny though that we all get to know about these characters but we don’t think about the people behind that character after all the character is probably an impression of his creators. It was like this when I reviewed a recent book about Stan Lee. While one man might have got all the credit at one point, at last, the full story and creative habits of both are now being revealed. I really enjoyed this book and the author Rik Worth does a good job of enticing the story out of them. I would fully recommend this book to fans and those who are such big fans of the Dark Knight.

I loved this book! I don't typically read nonfiction but I've loved comics, especially DC since I was a kid. Reading Batman's history was fascinating and I know that it was nice to see that the other authors of Batman get the recognition they deserve.

Worth wrote this wonderfully and at no time did I feel like it was dragging, I just kept reading.

Overall, fantastic book that I would rec to every comic lover. 5/5.

Like many fans before reading this I had no idea who Bill Finger was. Turns out they had a pivotal role in helping create this character. Yet for decades they were put behind Bob Kane’s shadow and therefore over the years became forgotten. This book also lets you know the bad times this character faced and gives insight to some directions Batman could have ended up going in. As this book came to a close this co-creator finally starts to get the credit they deserve.

Absolutely recommended read even if you're not a fan of comics or movies, it's a worthy read of the complicated creation of an art form.
Pen and Sword have published some great books this year, another book published was about Stan Lee, and that was as good as this! Looking forward to other books of this publisher as well, I'm very grateful to have been sent this ARC!

For Batman fans (like myself) especially the ones looking to go back to his creation, this sure is a fascinating read.

Does a terrific job of sifting the contributions made by various individuals which led to the enduring character of Batman as we recognise him today. He is not a figure who arrived fully formed on the page – nor even from one mind – and Rik Worth is impressively fair in teasing out who brought what to him, while remaining sceptical of the easy narratives on offer. Kane was no more a villain than Finger was a tragic failure (or Jerry Robinson overlooked, for that matter), but understanding how those images of the men have been formed is important in understanding the creation of Batman – and, perhaps, something about human nature.

A dive into the personal histories of the two men who had the most to do with the creation of Batman, exploring their early lives, their creation of Batman, and the fallout from it. One man achieved widespread success, and for many years was the only one credited with the creation, while the other received little to none of the fame for most of his life and died poor. This book is dense with good information about all the major players in early comic creation, and dives deep into how these people and the culture/world surrounding them changed comics throughout history. For any die-hard fans of Batman, or anyone who is curious about how modern day comics came to be, this will be an informative read.

I really enjoyed Rik Worth's writing style. I knew a little about the book's subject, but he definitely gave me more information that I did not know. If you are fan of comic books, The Creators of Batman is a great exploration of an important moment in comic book history and I recommend you check it out.

So having followed and read Batman for so many years I knew very little about how Batman came about and the creation of the character apart from the main stream media information this makes for a fascinating read. This book is well researched and delves deep into the character and its creators. In many ways the story is tinged with some sadness in the creation with the cocreator not getting the recognition that he deserved for so many years.. The book does not just look at the creation of Batman but also the history of the genre as a whole and how the industry started and progressed.
If you like the genre then this is certainly a must read to see the developments of both characters and the genre as a whole - I certainly discovered so many things I did not already know.


Batman, The Dark Night, Gotham’s Hero. Though the caped crusader goes by many names, he has defined American pop culture for nearly a century. Yet, very few people talk about Batman’s true origin story. No, not the one where his parents are killed and he swears vengeance. This is the story of the two young men who created Batman, busting into a comic industry with a character that would captivate imaginations worldwide!

You can get your copy of The Creators of Batman today from White Owl Books!

My Recommendation-
If you’re a comic buff who can’t get enough of the history behind today’s favorite heroes, you have to check out The Creators of Batman! This book gives an in-depth yet engaging peek into the history of comics!

This is a biography worthy of being added to any library that serves teens, those interested in comics, and those who like biographies…so really, all of them. Very readable and not too long, so it should hold the reader’s attention. Will recommend.

The Creators of Batman: Bob, Bill and the Dark Knight is an incredible read that I highly recommend for fans of the comic book industry.

I absolutely LOVE DC Comics. Their movies, their comics, and all of the merchandise gets my inner nerd so thrilled. I've loved DC my whole life, so it was only natural for me to want to learn a little more. This book was the perfect collection of background information on how Batman came to being. I knew about Bill Finger, but I never knew the whole story behind it. Bob Kane made Batman, yet he never gave enough credit to Bill Finger. It wasn't all Bob Kane, that was obvious. As more and more came out over the years, people started to appreciate Bill Finger more. Unfortunately, he didn't get all of the love while he was alive.

I was one of the people sitting in the theatre watching Batman V. Superman: Dawn of Justice and grinning like the Joker when I saw Bill Finger's name appear. It made my heart so happy that he got some of the love he truly deserved with creating one of entertainment's most famous superheroes.

Rik Worth's work is incredible. This compilation of information and pictures is one of the best non-fiction books I've read. I binged this entire book, which isn't something I normally do with non-fiction. It's not biased, but you can form an opinion pretty easily based off the work itself.

Overall, I highly recommend this book! It's one of the best non-fiction books I've ever read.

Five out of five stars.

The book is well researched with a lot of stories about and facts to bolster the argument, which does not seem to be in much doubt anymore. There is also a lot of information on the early days of comics and how they developed into what they are today.

Was it ego, a lust for the glory, cash or just a fear by Mr. Kane that he had only one shot, that after all the other things he tried nothing seemed as relevant as a young boy swearing vengeance on criminals for his murdered parents. The book leaves this open to interpretation, which is only fair as none of the major players are around. A very interesting book, not only for the history of one of my favorite comic book characters, but about art, collaboration and its creation.

I enjoyed this retrospective take on a very popular character who, by many points, was central to the stories that made a young reader out of me. Rik Worth includes history, as well as a focus on the relationships and materials that formed the Batman character. I enjoyed this book as a fan and as a scholar interested in writing more about popular characters.

It was an interesting read, many areas flew off the page and it was fascinating to hear the back story of the men who created my favourite super hero.

The writer does a great job of taking what is probably one of the most controversial stories about the 1930s Golden Age of superhero comics, and telling the story in a way that captures what is already known while also providing unexpected new facts. Definitely worth reading.

Rik Worth is a freelance journalist and writer from the north of England. When he isn’t writing about culture and class he writes comics about history. He has bylines in The Independent, Huffington Post UK and Prospect Magazine. His most recent comic, Hocus Pocus, with Richard Wiseman and Jordan Collver, looks at magic, the supernatural and science. This is his first book without cartoons (mostly). You can follow his rants on twitter at @RikWorth