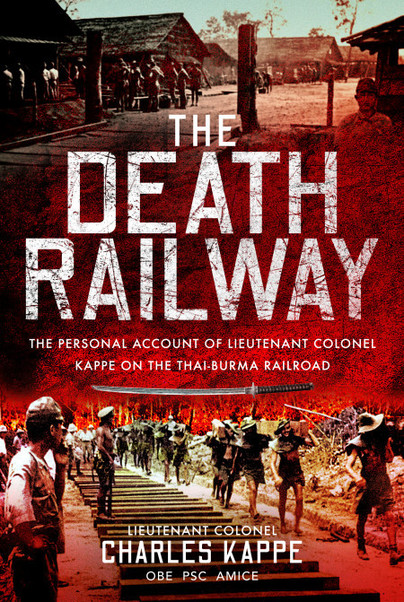 Click here for help on how to download our eBooks
Add to Basket
Add to Wishlist
You'll be £8.99 closer to your next £10.00 credit when you purchase The Death Railway. What's this?
Need a currency converter? Check XE.com for live rates

On 17th February 1942, the booming voice of Winston Churchill, on BBC radio, announced to the world that
Singapore's military garrison of almost 100,000 men had surrendered to a Japanese invasion force of 30,000 men.

On 4th March 1962, the Dutch East Indies (Indonesia) surrendered to the Japanese. Hundreds more were
taken prisoner. The Japanese next drove the British army out of Burma, with every intension of reaching India.
The Japanese faced a logistic problem, it needed reinforcements and supplies. It also had thousands of wounded Japanese soldiers, needing to be fed and hospital treatment. To overcome dual problem the Imperial Japanese Army decided to build a railway, the Burma Siam railway., or as Lt. Col. Charles Kappe calls THE DEATH RAILWAY.

There a number of books written by survivors who slaved on the railway but Charles Kappe book is the first that gives a comprehensive account of the death railway.
An absorbing read.

I still found it interesting and informative. I'm sure many on here with an interest in this conflict will find it worth reading.

Having met and worked with a survivor of this nightmare, I found some of it difficult to read and assimilate. Unbelievable inhumanity on an enormous scale.

This is one of those books that you read and you’re glad you never had to experience any of that. The lack of food, clothing and treatment would you would think send you mad and then to couple it with extreme heat and varying diseases is unimaginable. In a way, if you hadn’t read this book it would be hard to believe it or imagine when you think there used to be rules in place for looking after prisoners of war. This book reminded me of the film The Bridge Over the River Kwai in places, but I don’t think you can really understand how harsh it was unless you were there. Although this wasn’t a pleasant read, I’m glad I did, and enjoyed the writing of Lt Col Charles Kappe certainly a book for those interested in WW2 in the Far East.

The Death Railway is an accurate account of Lieutenant Colonel Charles Kappe. He experienced the atrocities of the PsOW that the Japanese forced to build a railway through Western Thailand to Myanmar.

The terrain of this area was rugged, the temperature was hot, and the treatment of these men was abysmal. What these prisoners underwent was horrific and unimaginable... If you are interested in WWII history that is more obscure and less talked about, this is a great book to read! It was very educational but also truthfully graphic.