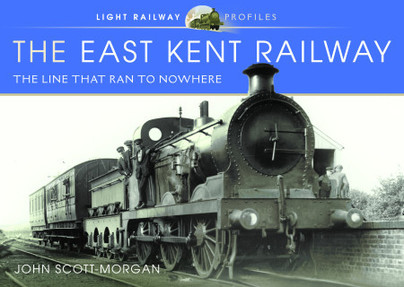 Click here for help on how to download our eBooks
Add to Basket
Add to Wishlist
You'll be £9.98 closer to your next £10.00 credit when you purchase The East Kent Railway. What's this?
Need a currency converter? Check XE.com for live rates


A good pictorial appreciation of one of the country’s lesser-known railways, covering the entire life of the line through to the present day preserved section of the line.

"The book begins with an introduction and two short sections on the Kent coalfield and on how the light railway became the EKR followed by brief history of the line including a map and a piece by Graeme Gleaves on the EKR preservation years. The rest of the book consists of excellent photographs, mostly one per page, with informative captions covering the main line and branches, the stations and collieries, the locomotives and rolling stock. This is probably the largest published collection of EKR photographs; therefore I can thoroughly recommend this book."

"While you may have wished that you had travelled on this line before closure, this book will go a long way to making you feel you have."

"Some readers may have copies of the Middleton Press book on the railway published in 1989. One prime difference between the books is the latest is targeted at being a high quality album rather than to the Middleton Press formula. The quality of the photos amply displays the primitive state of the infrastructure and rolling stock."

Alan de Burton, The Journal of the Friends of the National Railway Museum Winter 2021-2022

"This book is recommended as an extensive photographic record of this outpost of the Colonel Stephens’ empire."

"This book is highly recommended and should find a place on the bookshelves of all lovers of Britain’s light railways."

"Your reviewer visited the EKR on one occasion, when it was still hauling coal, and has always had a great liking for minor railways, particularly the Colonel Stephens lines. Thus, he enjoyed this book and would recommend it to anyone with similar railway interests and tastes."

"This largely pictorial volume is a pleasant browse."

"A good reference work for modellers and useful to the very general reader. It is nevertheless welcome as a rare addition to the East Kent Railway’s rather limited canon."

"The author’s good personal knowledge of the route and conversations with former employees are put to good use in the captions to images garnered from wide variety of well-known photographers."

Scott-Morgan’s latest description is refreshing and a pleasure to indulge, allowing the reader to follow more clearly the details of its short history in the early 1900s to closure and current success as a partly preserved railway at the present day.

The book’s greatest achievement is undoubtedly the inclusion of many photographs and detailed descriptions. About half of those shown have not been published before so will provide a renewed source of interest to followers of Colonel Stephens’ Railways.

This book will take you back to the sometimes busy, often chaotic and grimy days of the line that oozed Colonel Stephens' character.

"This great book is jammed pack with superb photos."

The Colonel Stephens Magazine no 144

This isn't trying to be a definitive work on the history of this fascinating railway, but rather provide a good overview through well presented and informatively captioned pictures, and it does that very well. It's an easy book to read or just flick through, enjoying the photos and learning about the quaint and minimalist railway that once ran through a quiet corner of Kent.

The new series of ‘Light Railway Profiles’ from Pen and Sword starts with a brief history of this interesting railway which mainly covered the Kent coalfields in the eastern part of the county and contains probably more photographs of the whole setup than there has ever been in one publication before. Highly recommended.

An interesting volume covering this forgotten railway. It provides a good overview with some nice black and white photographs that give a good flavour of the line