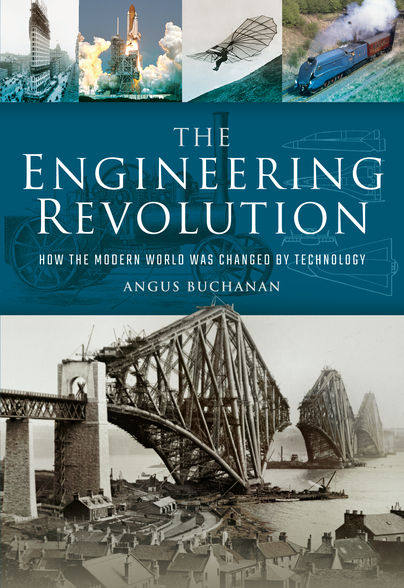 How the Modern World was Changed by Technology

Click here for help on how to download our eBooks
Add to Basket
Add to Wishlist
You'll be £4.99 closer to your next £10.00 credit when you purchase The Engineering Revolution. What's this?
Need a currency converter? Check XE.com for live rates

Over the past two million years that human species have inhabited the Planet Earth they have distinguished themselves by their ability to make and do things creatively to ensure their survival. From the beginning, therefore, they have been defined by their technology, and the history of technology is the history of the species. For most of this period, the development of human technical skills has been extremely slow and repetitive, limited to basic tools and weapons and the ability to control fire. The utilisation of animal power and the invention of the means of harnessing the power of wind and falling water added gradually to their technical skills, but it was the discovery of ways of using power from heat engines a mere three hundred years ago that accelerated this process into a prodigious expansion of technical power that fundamentally transformed human societies . It is this development which deserves to be called ‘The Engineering Revolution’ and provides the primary focus of this book.

Ten authors have collaborated to present a new “take” on the history of technology by relating some of the most important aspects of modern technological developments to the culture which they have transformed and the many challenges they present to the modern world.

The book as a whole is a very useful textbook of information. Each chapter concludes with a section of further reading, where numerous books are listed in detail.

This book paints a picture without going into too much detail, though parts of it can be quite thought provoking. While of limited interest to the model engineer, it provides a mildly distracting read.

This book is the result of collaboration between ten authors with different areas of expertise who have been drawn together through the History of Technology Research Unit at the University of Bath, a small but effective group of scholars and other experts in aspects of technological history who have submitted their contributions to discussion by the team. The result is a refreshingly new ‘take’ on the history of technology by relating some of the most important aspects of modern technological developments to the culture which they have transformed and the many challenges which they present to the modern world.