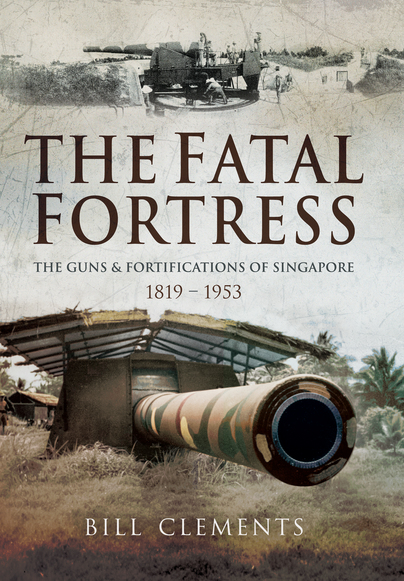 Click here for help on how to download our eBooks
Add to Basket
Add to Wishlist
You'll be £4.99 closer to your next £10.00 credit when you purchase The Fatal Fortress. What's this?
Need a currency converter? Check XE.com for live rates

The Fall of Singapore in February 1942 was arguably the greatest disaster suffered by the British Empire. Between 1923 and 1938, the Singapore naval base had been upgraded with some of the largest coast guns ever installed. The guns’ design and incorrect siting have since been blamed for the humiliating debacle.

The Fatal Fortress traces the history of Singapore’s fortifications and guns from the city’s foundation in 1819 to the demise of coast artillery in the British Army in 1953. It also follows the development of artillery through the Victorian era of muzzle-loading guns to the introduction of the large breech-loading guns of the twentieth century. The author argues that it was not the siting of the guns that brought about the fall of Singapore, but an overall failure in command and control and a lack of suitable ammunition.

The book is illustrated with a large number of photographs, drawings and plans, and contains a gazetteer describing all the batteries and forts, both existing and demolished. There is also an annex giving the details of the guns that were installed in Singapore.

The book is well illustrated with many historic photographs and maps and is a worth addition to any military history library, and for GUNS Australia readers, it also contains a lot of information on the artillery that was used in Singapore during it life as a fortress.

Bill Clements has done a most comprehensive job of explaining the paradox of Singapore. The text is clear and is supported by many interesting and unusual photographs, as well as clear mapping.
Thoroughly recommended.

Most of the coverage of the of Singapore’s defences has concentrated on the brief battle when a larger British and Commonwealth force surrendered to the Japanese generals who had been surprised by the surrender. Coverage of the defensive guns and fortifications has been relatively modest and usually confined to comments that the guns pointed seaward and were of little use against an attacker coming out of the jungle. The author has made a fine job of describing the history of Singapore’s defensive artillery from the founding of the city, to the demise of Coastal Artillery in the British Army in 1953. A very interesting read that is recommended.

...it certainly deserves a place in the libraries of the Armed Forces and in some technical institutions if gunnery is your interest. It is finely produced with lots of photographs and sketches throughout, and well priced at £19.99

This book is very readable although it covers a lot of technical matters. I learned a lot – mostly that the guns were not pointing the wrong way, they were just mismanaged, misplaced, misdirected and misused. Some of that was due to the fog of war, some due to politicians and civil servants, and some to poor command. The jury is out on General Percival!

According to well-held popular opinion, the fall of the British possession of Singapore to the Japanese in 1942 was largely the result of ‘The guns facing the wrong way; out to sea, when they should have faced ‘inland’; towards the (then) British colony of Malaya (now Malaysia)’. But was this in fact the case?

In this well-written and exhaustively-researched volume, Bill Clements seeks to clarify the situation. His narrative consists of two parallel themes; ‘Political’ and ‘Military’ the former providing ‘the reasons why’, the latter the military response.. The tale that results is one of conflicting orders, evolving and changing international policies, self-important experts, technological development and unnecessary expense. An inability to think beyond very fixed perceptions, also contributed to what eventuated. The miracle is that despite all the foregoing, some of the heavy artillery on Singapore was in fact able to contribute to its defence. The unfortunate aspect is that these guns could have done so much more. The facts are presented objectively and in impressive detail. The post-World War II era is also covered. A subsection in the final chapter which lists what remains of the fortifications in 2016, would be a useful guide for any visitor wishing to view what little is left.

The main part of this work consists of 11 Chapters, and three Appendices. Several chapters contain subsections which relate to specific topics within the larger chapter. End-notes are used throughout the book and these are listed in a separate Notes section at the back of the book. A Glossary, Bibliography and Index are also provided. Although Maps and Photographs appear throughout the volume.

In precis, this work is a well-researched and written history of both Singapore Island and the guns that were intended to defend it when it formed part of the British Empire. As such, it is of high historical value.