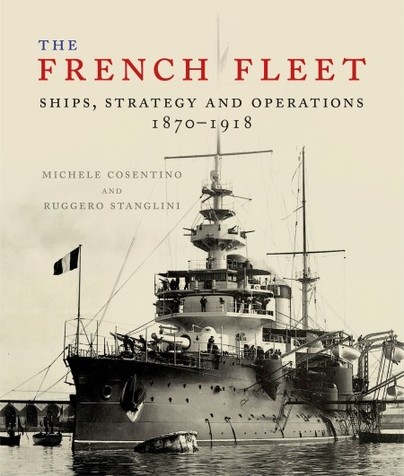 Preorder
Add to Wishlist
You'll be £36.00 closer to your next £10.00 credit when you purchase The French Fleet. What's this?
+£4.50 UK Delivery or free UK delivery if order is over £35
(click here for international delivery rates)

At the end of the 1870-1 Franco-Prussian war, the French Navy began to reconstruct its fleet, replacing old generation warships with steam-powered and iron-hulled men-of-war. However, the process was slow and erratic since priority was initially given to the Army. Additionally, the establishment of the Third Republic led to a long period of political and economic instability which affected naval and shipbuilding policy. French naval yards and private shipyards were committed to build a fleet of ironclads, cruisers and minor vessels and led France to become the second European naval power, at least quantitatively. The rise of the ‘Jeune Ècole’ (Young School) strategic naval concept in the early 1880s then changed shipbuilding priorities, and emphasis was given to coastal torpedo boats and cruisers while the construction of battleships was slowed. As a consequence, the French Navy implemented the dreadnought concept later than other European naval powers, namely Great Britain and Germany. The 1904 Entente Cordiale contributed to yet further radical changes to foreign, naval and shipbuilding policies, so that at the outbreak of World War One the French fleet was populated with limited dreadnoughts, many obsolete armoured cruisers, an impressive array of torpedo boats and a fleet of submarines whose efficiency was however questionable.

The book provides a complete overview of the French Navy from the establishment of the Third Republic to the end of World War One. French foreign and naval policy, shipyards and industrial organisation, technological innovations, operations and shipbuilding programmes are all described in the first part of the volume, while the second and larger part is focused on the different categories of warships, including their qualitative and quantitative evolution during the period of 1871–1918 and their employment during the Great War. A chapter is also dedicated to naval aviation.

Superbly illustrated with rare and carefully selected photographs, this major new reference book paints a clear and detailed overview of the French navy during this era and will stand as a vital companion to French Warships in the Age of Steam 1859–1914 published by Seaforth.

MICHELE COSENTINO is a retired Commodore in the Italian Navy. He has written extensively on naval policy and technical issues, his most recent book focusing on the design and operations of Italian aircraft carriers from 1912 to 2021.

RUGGERO STANGLINI contibutes to Italian defence magazines and he has written several books on naval affairs. Their book, British and German Battlecruisers, published by Seaforth, was received to critical acclaim.