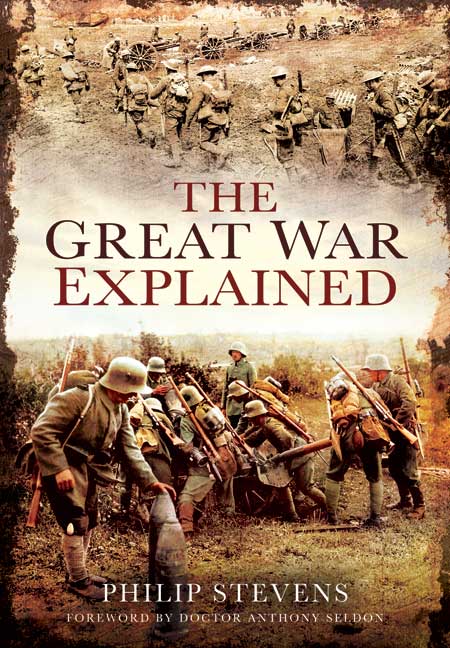 You'll be £4.99 closer to your next £10.00 credit when you purchase The Great War Explained. What's this?
Need a currency converter? Check XE.com for live rates

It is greatly to the author's credit that he has produced a work that is logically arranged, readable, sensible and for many people unfamiliar with this period of history, a valuable and interesting explanation. Overall it is good and well worth the money.

Stevens' book is very accessible and the perfect book for anyone exploring the history of the Great War for the first time....A useful, concise, well-written guide to the Great War.

The book is presented in a fun, conversational style – loaded with some interesting pieces of trivia scattered throughout in box-outs. The upbeat writing style is one of the book’s strongest assets, as it gives the impression of being on a battlefield tour with a particularly knowledgeable and affable guide. The pacing is excellent, never lingering too long, never skimming over an area too quickly.

The book is essential reading for anyone planning to undertake a Great War battlefield tour or gain a better understanding of this dramatic period in our history.

Philip Steven's is in the vanguard and has given us, in a concise and readable from, a book which everyone will be able to understand, explaining the Great War to that new generation who will be growing up without knowledge of those splendid veterans whom we older folk know so well. I would commend this book to anyone coming to the Great War for the first time and even an old hand could benefit fom a fresh glance from the back foot.

Almost a century on, interest in the events of the First World War is far from declining. As the author points out in his introduction, he started writing after he had guided a battlefield tour during which the question was asked “Where can I find a beginner's guide to why we are here and what we are seeing?” This book is the result.

An absorbing, intelligent and very well written book detailing the war not as a traditional history, but as an easily accessible guide, if you will, to the events and people. The book offers the reader a way of gaining a better and broader understanding of the conflict. Covering vital background information, explanations of the conduct of the war and vivid personal testimonies, this is a book that can be used as a perfect introduction to the subject and as a guide to those with substantially more knowledge and interest. First-class work. 10/10.

I have just received my copy of this book and already I'm hooked!

Having tried many times to understand the facts and politics behind this major event in our history I have finally found a book that brings to life the conflict, the major characters and events that shaped it as well as the often tragic stories of the soldiers themselves. Including the first man of colour to fight for the British Army.

This excellent book is helping me understand the battles and people that I have felt I should know more about: Kitchener, Douglas Haig, Bismarck, verdun, The Somme, Galipoli.

The many, useful and detailed appendices make this a valuable reference resource as well as an easy to read account of the First World War.