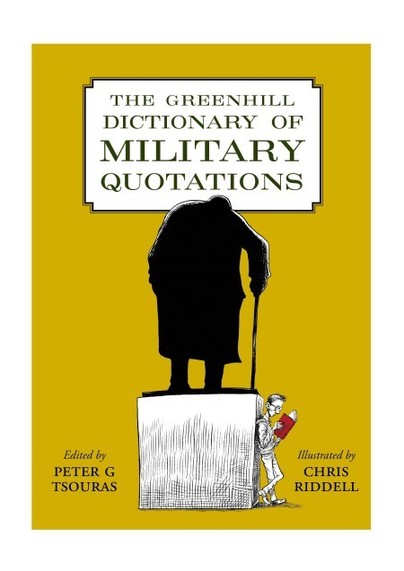 Add to Basket
You'll be £15.59 closer to your next £10.00 credit when you purchase The Greenhill Dictionary of Military Quotations. What's this?
Need a currency converter? Check XE.com for live rates

Peter Tsouras brings 4,000 years of military history to life through the words of more than 800 soldiers, commanders, military theorists and commentators on war. Quotes by diverse personalities – Napoleon, Machiavelli, Ataturk, 'Che' Guevara, Rommel, Julius Caesar, Wellington, Xenophon, Crazy Horse, Wallenstein, T.E. Lawrence, Saladin, Zhukov, Eisenhower and many more – sit side by side to build a comprehensive picture of war across the ages.

Broken down into more then 480 categories, covering courage, danger, failure, leadership, luck, military intelligence, tactics, training, guerrilla warfare and victory, this definitive guide draws on the collected wisdom of those who have experienced war at every level. From the brutality and suffering of war, to the courage and camaraderie of soldiers, to the glory and exhilaration of battle, these quotes offer an insight into the turbulent history of warfare and the lives and deeds of great warriors.

This is a great book to dip in and out of, and I’m sure you’ll all find some old favourites and discover some new ones. It is also a great resource to history teachers (and teachers in general), writers (not only of stories with military or action subjects), historians and those interested in such topics, fans of general knowledge, and people who love quotations and are forever looking for new sources and collections.

Without a doubt, however, we are faced with a book that will be continuously browsed and consulted by the military historian and the enthusiast.

This is one of those luxurious books that keep eyeing you from the bookshelf and tempting you to dip into its massed ranks of quotations. It has been well curated so that it never reads as a list. My favourite is of course Napoleon; “The knowledge of higher leadership can only be acquired by the study of military history and actual experience”. I rest my case, and heartily recommend this volume.