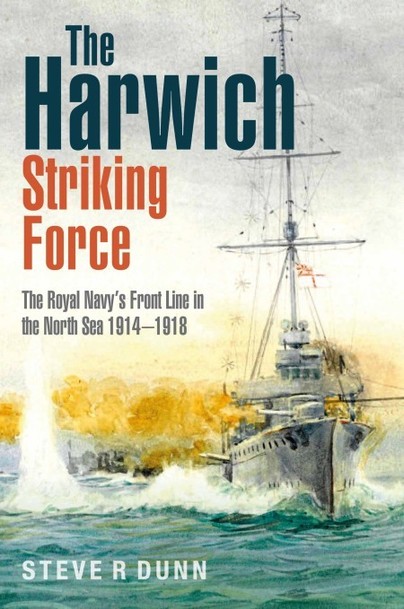 Preorder
Add to Wishlist
You'll be £20.00 closer to your next £10.00 credit when you purchase The Harwich Striking Force. What's this?
+£4.50 UK Delivery or free UK delivery if order is over £35
(click here for international delivery rates)

'The Harwich Force has made its name and will not be forgotten during the future annals of history’; so said Rear Admiral Sir Reginald Tyrwhitt on Armistice Day 1918. But that fame has not endured. Yet for the whole duration of the First World War, the Harwich Striking Force was the front line of the Royal Navy, a force of cruisers and destroyers defending the seas for the Allies.

Under a charismatic and aggressive leader, Reginald Yorke Tyrwhitt, U-boats, German cruisers, destroyers and light craft all met their ends at the hands of the Force, as did enemy seaplanes and Zeppelin airships. The Harwich ships were at sea almost daily throughout the war, haunting the German coast and the Friesian Islands, pioneering aerial attack from the sea, developing naval carrier aviation and combined air/sea operations, and hunting for enemy submarines and minelayers in the North Sea. The Harwich Force also took part in major naval battles alongside the Grand Fleet’s battlecruisers, and protected merchant ships operating in the dangerous waters around Denmark, the Netherlands, Germany and Britain.

The author also assesses the role played by the other Royal Navy formations at Harwich: submarines, auxiliary minesweeping and patrol vessels, the Felixstowe seaplane base and the town itself. And when the war was finally won, the Force gained further fame when the German U-boat fleet was surrendered there.

Lavishly illustrated, this book is an enthralling account of the men of the Harwich Force, of their grit and brave sacrifice and the key part that they played in the final Allied victory against Germany.