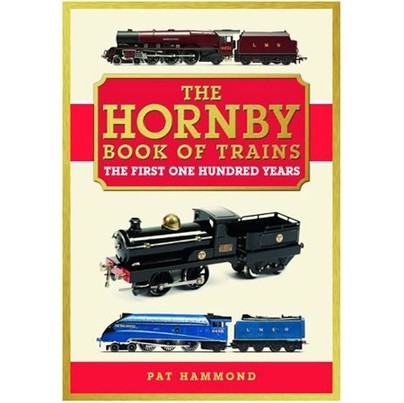 The Hornby Book of Trains (Hardback)

The First One Hundred Years

Add to Basket
Add to Wishlist
You'll be £20.00 closer to your next £10.00 credit when you purchase The Hornby Book of Trains. What's this?
+£4.50 UK Delivery or free UK delivery if order is over £35
(click here for international delivery rates)

When talking of model railways, the name Hornby means different things to different people. To some, it is the large 0 gauge metal trains mainly of the interwar period. To others, it is the 00 scale Hornby Dublo trains which were at their peak in the 1950s. To modellers, it is the highly detailed models they find in shops today. While they share a brand name, they are all very different products. The Hornby brand has been owned by four different companies and while it has been carried by three quite different systems, they have had three things in common – they have been British, they have been quality products and they have all carried the name ‘Hornby’ with pride.

Here, in one volume, is an account of the fortunes, successes and occasional failures of the Hornby model railway brand. Unlike its competitors, Hornby has survived for a hundred years by out-witting every toy industry recession that came along. The story starts with the Hornby 0 gauge system, first introduced in 1920, and follows the Hornby name year by year, with pictures of many of the models that have been produced over the last century – including several which never made it into full production. It also contains a section at the end of each decade to summarise developments and to cover wider issues.

The Hornby brand is a truly British icon.

The definitive catalogue of Hornsby model railways.
A must have volume for the collector and enthusiast

As a child, Pat Hammond, with his older brother, played with a mixture of secondhand Hornby 0 gauge trains which their father had bought from boys at his school in the 1920s and had kept for his own children. In 1953 these trains were sold and Hornby Dublo was bought for Christmas. Pat eventually changed over to the more affordable Tri-ang system by Rovex. From then on, he developed a growing interest in collecting earlier models and in researching the history of the British model railway ranges, particularly those made after the Second World War.

Over the years, Pat Hammond’s collecting has widened to embrace many different British brands and culminated in his first venture into writing with ‘Collector’s Corner’ in Model Railway Constructor magazine in the 1980s. It also led him to write the Rovex Trilogy of books covering Tri-ang Railways 1950-1965, Tri-ang Hornby 1965-1971 and Hornby Railways 1972-1996. Pat is also the author of Ramsay’s British Model Trains Catalogue which is in its 9th Edition."