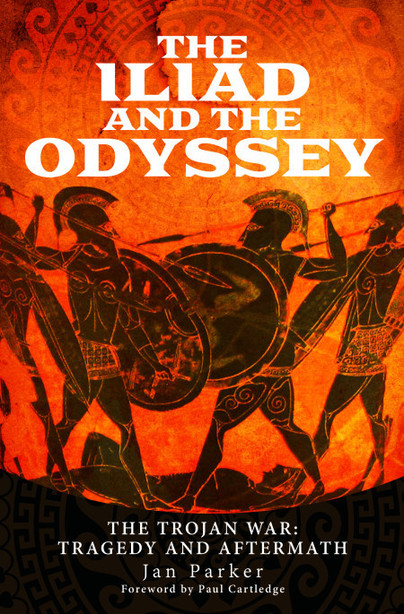 The Iliad and the Odyssey (Kindle)

The Trojan War: Tragedy and Aftermath

Click here for help on how to download our eBooks
Add to Basket
Add to Wishlist
You'll be £4.99 closer to your next £10.00 credit when you purchase The Iliad and the Odyssey. What's this?
Need a currency converter? Check XE.com for live rates

The Iliad dealing with the final stages of the Trojan War and The Odyssey with return and aftermath were central to the Classical Greeks' self identity and world view. Epic poems attributed to Homer, they underpinned ideas about heroism, masculinity and identity; about glory, sacrifice and the pity of war; about what makes life worth living. From Achilles, Patroclus and Agamemnon in the Greek camp, Hektor, Paris and Helen in Troy's citadel, the drama of the battlefield and the gods looking on, to Odysseus' adventures and vengeful return - Jan Parker here offers the ideal companion to exploring key events, characters and major themes.

A book-by-book synopsis and commentary discuss the heroes' relationships, values and psychology and the narratives' shimmering presentation of war, its victims and the challenges of return and reintegration. Essays set the epics in their historical context and trace the key terms; the 'Journey Home from War' continues with 'Afterstories' of both heroes and their women.

Whether you've always wanted to go deeper into these extraordinary works or are coming to them for the first time, The Iliad and the Odyssey: The Trojan War, Tragedy and Aftermath will help you understand and enjoy Homer's monumentally important work.

"The Iliad and the Odyssey: The Trojan War: Tragedy and Aftermath" will prove of immense interest and value to both academia and to the non-specialist general reader with an interest in the subject.

This book is an insightful look and explanation of Homer's epic poems "The Iliad" (the Trojan War) and "The Odyssey" (Odysseus' return from the Trojan War). It also explains the thoughts and conversations of the Gods who attempt to direct the course of events during the war.

Each of the sections begins with an outline of that books story, followed by an in depth analysis of the structure, themes and Greek ideas about heroic bonds and values.

A good book for anyone who has an interest in Homer's poems.

The book seems to me to be, in effect, three books in one:

1. A detailed set of plot summaries for both the Iliad and Odyssey, giving a clear direction as to the main issues raised in the poems, and how one might respond to particular moments in Homer's narratives.

2. A 'glossary' of key terms, clarifying Homer's psychological and moral assumptions, which are often very different (at least on first acquaintance) from those of many modern readers. These sections of the Homer book are particularly valuable, since they preserve the key Greek terms in the original language, and render them in ways that make clear how susceptible they are to a range of meanings, rather than being easily translatable by one-word English equivalents. They go as far as is possible to make 'Greek ways of thinking' accessible to non-Greek readers: a new approach which makes your book particularly valuable.

3. An attempt to explain why the Homeric poems offer such a diversity of interpretative possibilities for readers, and are thus well suited to the teaching process. For you, clearly (as for all inspiring teachers!) teaching involves the sharing and debating of individual responses to, and pleasures in, a text. It also depends on the faith that old texts can (whatever adjustments and re-orientations they engage with en route), speak directly to modern readers in a way that might entitle them to be regarded as 'classics'.

The book will be extremely useful for students and readers at all levels and of all ages coming to Homer. It's very attractively and accessibly written, and manifests on every page the excitement and commitment as a teacher of these texts over many years, and to a variety of students.

One of the many great features of this book is the glossing of key words, constantly allowing the reader an insight into the original Greek terms used to describe concepts such as honour and glory that are so important to Homer's heroes.

Tremendous – Jan’s book extends a warm and wonderful invitation to share an experience of Homer that is at once scholarly and personal. It is a phenomenal resource for any student or teacher.

Jan Parker offers an engaging narrative and insightful exploration of the world of the Trojan War. She explores the many layers of Homer’s accounts of heroic fighting, values, and psychology. Parker has written the ideal companion to Homer and his heroes.

Dr Jan Parker teaches and researches Classical and Comparative Literature in the Faculty of English, University of Cambridge. She is Founder Editor of Arts and Humanities in Higher Education: an international journal of theory, research and practice.

She has been teaching Homer, both in Greek and in translation, for over 15 years, including 'Opening the Text: Homer' courses for the University of Cambridge Institute of Continuing Education and an annual course for the University of Cambridge International Summer School, which she directs. Among her books is Tradition, Translation, Trauma: the Classic and the Modern; she has edited and written an introduction to George Chapman's translation of the Iliad and Odyssey.