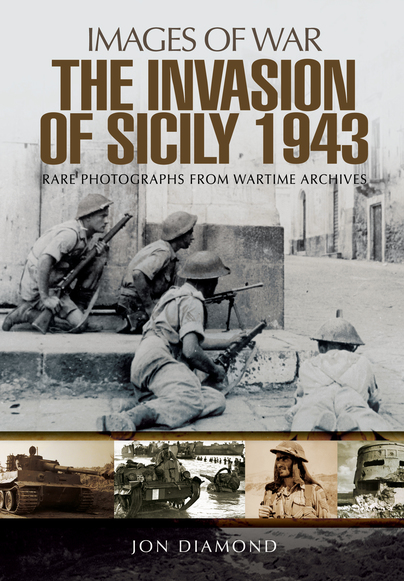 Click here for help on how to download our eBooks
Add to Basket
Add to Wishlist
You'll be £4.99 closer to your next £10.00 credit when you purchase The Invasion of Sicily 1943. What's this?
Need a currency converter? Check XE.com for live rates

With victory in North Africa complete, the Allies had a choice. The Americans wanted an early cross channel attack from Britain on North West Europe. Churchill favoured invading the soft under-belly of Italy to weaken the Axis forces and gain Italian surrender. With Eisenhower's army and battle-hardened Eighth Army in North Africa, Churchill prevailed.

The ambitious Operation HUSKY required meticulous planning. Montgomery's Eighth Army and Patton's Seventh landed successfully although the air landing proved costly. While the outcome was not in doubt the mountainous terrain acted in the defenders favour. The German presence was higher than expected and the vast bulk of the enemy were Italian. In little over a month, the first Americans reached Messina.

The strategic plan was successful: the Italian capitulated, Hitler had to reinforce his Southern flank relieving pressure on the Soviets and valuable lessons were learnt by the Allies for D-Day.

One of the larger books of the Images of War series, describing what was then the largest amphibious assault ever undertaken. A concise narrative accompanies the five chapters which look at the build-up to the invasion, the state of the Axis defences and the difficult terrain of the island, the commanders and troops involved, the landing itself, and the advance inland. As ever it is the considerable collection of large and rarely published photographs which take centre stage, each of which have been carefully selected to highlight a very broad range of equipment and subjects. These include the naval armada, amphibious landings, bombing, dug-in artillery, armour, mine clearance, and airborne troops, and together they are an impressive and vivid record of one of the Second World War's great set piece operations.

A wonderfully illustrated book with tons of interesting information about the battle for Sicily.

In 1943, British, Canadian and American forces launched a seaborne attack against Germany's Axis partner, Italy. It was the first step in the war to free Europe of the Nazi yoke. The target was Sicily. The invasion was code named Operation Husky.

On July 10 1943, the British 1st Division successfully fought their way ashore and captured the bombed and ruined port of Pantelleria. In his book 'Images of War, The invasion of Sicily 1943', Jon Diamond provides a gallery of rare photographs from wartime archives. The invasion was preceded by an airborne invasion by British and American airborne forces. Tragically many dropped into the sea and drowned. The invasion barges passed through the men in the water, ignoring their pleas for help,and sped towards the heavily defended beaches. The town was swiftly captured by British troops and in the first week 20,000 Italian soldiers surrendered. The photographs are predominately of Canadian and American forces: one interesting point is the photographs show American airborne troops carrying a reserve chute. The British airborne troop were only carried one and it was only in 1957 were they issued with a reserve chute when Britain became a member of NATO.

The photographs give a rare ugly glimpse of war, each fallen soldier has a family, street fighting and an army on the move with donkeys and tanks, each playing its part. An absorbing read.

The text with each chapter makes for an interesting account of the operation, as well as the photos which illustrate the story of events and which in turn have more useful captions that tell more of the story. The terrain, the villages all give a good illustration of both the atmosphere and the character of the war that came to Sicily. For the modellers, there is some helpful detail on uniforms and equipment of the place and time which could be helpful as ideas and inspiration for a variety of dioramas.