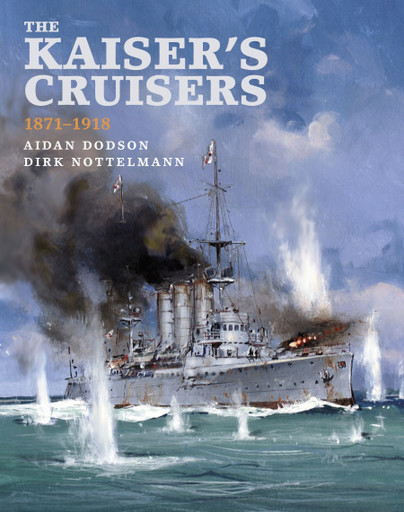 A comprehensive guide to how and why each ship was built, with details of the global political situation at the time. With the advent of WW1 there is much more on actual sea battles, including many that we have also covered. There are some excellent photos of the ships.

"Readers of Warship International will recognize Nottelmann as the author of a major (about 450 pages) series of twelve articles covering German battleships and battle cruisers published in the magazine between 2011 and 2020 with the overall title of “The Development of the German Navy 1864-1918.” In these Nottelmann demonstrated a mastery of German archival materials that he then brought to the cruiser book. The result is a depth of detail in the design histories of the ships that is rarely encountered and a wealth of ship plans (single page width), some of which came from the archives and some of which Nottelmann drew. Particularly unusual is a series of drawings (longitudinal sections and multiple deck plans) issued by the Imperial Admiralty at the end of the 1870s and covering early cruising ships from Vineta (1860) to Carola (1879) and including the torpedo vessel Zieten (1875). The book also benefits from Nottelmann’s large photograph collection and from both authors’ thorough coverage of the ships’ operational histories."

"This an exceptionally well researched and produced volume and is a must for those with an interest in the German navy. Highly Recommended as the start point for research in this area."

In conclusion, this is another excellent reference book from Seaforth publishing that covers one of the most interesting periods in German Naval history and concentrates on a portion of that history that is less well documented. As such the book is likely to be a welcome addition to anybody’s library of books on the Naval subjects.

If you have an interest in Naval History, this book is an essential addition for your collection. A wonderful historical reference book, which can be constantly re-visited.

This book is valuable in many respects, but it stands out in the analysis of ship performance; the insights it provides on German Government and naval thinking at the time; and last but not least it is a quality book in English on a foreign warship type which is little covered in detail elsewhere. It is highly recommended.

A superb record of the ships of the Third Reich.

I like the structure of the book, with the technical aspects of ship design and their pre-war careers dealt with first, followed by two chapters on the First World War. As a result we get a clearer view of the way in which these designs evolved, without sizable combat histories in between, and then a good overview of how the available cruisers performed without too many technical details to disrupt the flow.

A remarkable book which will appeal to anyone interested in the development of naval history, especially that of Germany. It is well written and detailed, to the point of including the plans and blueprints for the development of the first German fleet.
The book begins with an excellent overview of the establishment of Germany as a nation - which reminds us that this only occurred as recently as 1871. Before then, Germany consisted of an amalgam of independent states. With the foundation of the new Germany, the process commenced of planning a national fleet which then consisted of a handful of elderly training ships, mostly still relying on sail as the means of propulsion. More modern warships were then planned, mainly to secure the German coastline of the North Sea and Baltic where Germany’s neighbour, Denmark, had long since acted malevolently towards Germany.
Interestingly, the book reminds the reader that, at that point in time, Germany had no overseas colonies. It was not until the following year, 1872, that the first German cruiser, the Nymph, reached the South Pacific. A ‘flying squadron’ of cruisers was then commissioned to represent Germany’s interest’s worldwide, to begin with, to encourage the payment of any outstanding monies to Germany or it’s citizens then resident overseas.
The book then turns to the detailed account of the development and construction of the numerous naval vessels necessary to support Germany’ growing interests worldwide. I was pleased to see the book included maps to support these accounts.
This is a technical work best suited to experts in the field, a ‘stand alone’ work which completely covers the subject. I strongly recommend it to anyone fitting this description.