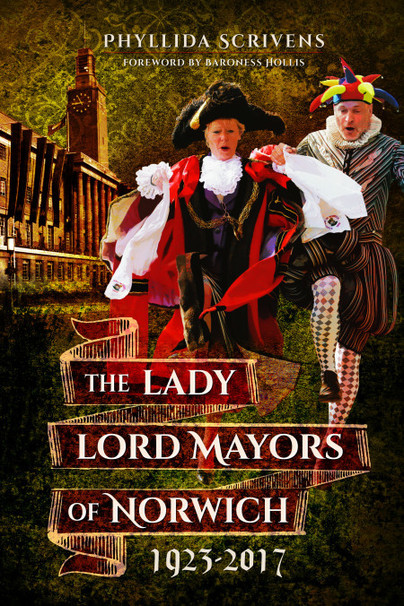 THE LADY LORD MAYORS OF NORWICH 1923–2017 offers an entertaining and revealing insight into the diverse lives, both personal and civic, of seventeen remarkable women, who from 1923 to 2017, have each held the honour of being First Citizen of the City of Norwich in Norfolk, England. Moreover, the pioneer Ethel Colman, daughter of the mustard giant Jeremiah James Colman, simultaneously became the first female Lord Mayor of both Norwich and of Great Britain.

Amongst others, meet the war refugee from Czechoslovakia; the ‘Ten Pound Pom’; the manageress of C&A; the keen amateur actress; the Trade Unionist; the Scot from the Glasgow shipyards; the hairdresser Lord Mayor; the prison governor’s wife and the first known official consort with Down’s syndrome. Discover the civic coach, priceless regalia, traditional robes, Whifflers, Snap the Dragon and the magnificent Art Deco Norwich City Hall, opened in 1938 by King George VI and allegedly coveted by Adolf Hitler as his regional HQ if the Nazis should win the Second World War.

This book is published in the centenary year of the Representation of the People Act when women first received the vote.

This is an ideal book for those with an interest in Norwich history or those interested in the position of women.

The detail on every female Lord Mayor is interesting and educational. The author has obviously taken time and care to put together all aspects of the Lady Lord Mayors and has made this unique connection in to a great book.

I was born in Norwich and chose this book to learn about the history. A very interesting read.

As featured in 'subscriber spotlight'

As featured in 'Our recommended round-up of local reads'.

One of the most interesting, informative and important local history books to have been published in recent times.

Article: 'One was the first female lord major in the country, another was a refugee, another the first in Britain to choose a consort with Down's Syndrome. The stories of Norwich's female lord majors are told in a new book, writes Rowan Mantell ' as featured in

Phyllida Scrivens as seen on

This was an informative book about the women who have been Lord Mayor in Norwich, England. It was interesting to learn the backgrounds of the women who have held this position. I wasn’t necessarily the target audience for this particular book, as I have very little knowledge of the role of a Lord Mayor and Norwich. This would potentially be more interesting, I would think to people within Britain and especially in and around Norwich. With that said, I did enjoy learning about the women who held this position. The work these women did prior to obtaining this title, is very useful for young women aspiring to grow in any career. I was most pleased, being a woman, that these women worked hard and supported their community in various ways. They weren’t given this title just because they were women. An interesting book.

I'm from Norwich and it was a great way to learn more about this fine city. It was an interesting read and I left it learning more about the politics of Norwich women.

You do not need to have an association with Norwich to enjoy this interesting and illuminating book covering the lives and experiences of the 17 female Lord Mayors that cover the period from 1923 to 2017...

... At a time when it can be argued that the role of local government is increasingly under pressure this book is a timely reminder of it's importance and a fitting record to the lives of these remarkable women. I would recommend this to all those who have an interest in gaining a greater knowledge of the social and historical developments within our society and of course if you are lucky enough to be a citizen of Norwich then this is a must read.

I come from Norwich and I am active in the politics of the city so when this book appeared on NetGalley I was pretty damned please, this is the book for me I thought, and I was very very right.

This book collects short biographies of the women who have been mayor of Norwich, sharing how they ended up in the city and what they did when in the robes, giving honest and frank accounts of their time in office. Phyllida Scrivens writes these women with passion and care that makes this book sometimes emotional but such a fantastic book.

The biographies are a combination of sourced materials and personal adnecdotes, the book certainly covering the excellent range of people and personalities that have been mayor of the ‘fine city’ we call Norwich from people who have served on the council and from the Lady Mayors themselves which makes for entertaining reading.

I recommend this book to anyone who enjoys Norwich’s history, but also anyone who would like an insight into one of the more progressive cities in the country. Books such as this make me really proud I live in this city and it makes me want to delve into the sources in this book and know it a lot better than I do!