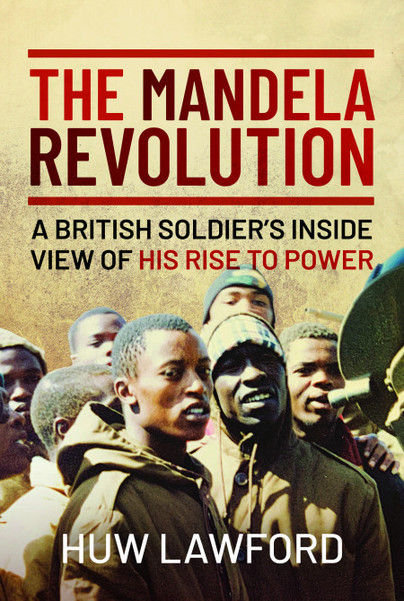 Add to Basket
Add to Wishlist
You'll be £14.00 closer to your next £10.00 credit when you purchase The Mandela Revolution. What's this?
+£4.50 UK Delivery or free UK delivery if order is over £35
(click here for international delivery rates)

Highlight: 'For anyone who
is involved in training or working with international military the book must form
part of their reading repertoire.'

I found this a very honest book on the problems of dealing with South Africa during his three years based there, and the Country's gradual evolution. There are bound to be a few readers who took part in this fine effort, but for any one interested in the changes made in South Africa, this book is an excellent and informative read, and the Author's love for Africa is self evident. It is a thoroughly enjoyable read, and an a fine commendation for all the hard work put in by the British Military.

Colonel Huw Lawford RA. Ret tells the story of a small British advisory mission to South Africa tasked with uniting the multiple anti-apartheid military groups some of which were violently opposed not just to the Apartheid government but to each other. Lawford provides a fascinating look into a hopeful outcome of one of the last Western Empires that through hard work, persistence, and good will has managed to transition from a one-party race-based system of government to one of the possibilities. South Africa still remains the most dynamic country in Southern Africa as well as a potential force for good on the world stage. Lawford and his small band of brothers helped to prevent a fractious civil war filled with anarchy in 1994 by integrating the South African military forces.

Rating: 5 out of 5 stars
In response to a short notice request by the Mandela Government of National Unity, a tri-Service British Military Advisory Training Team was formed and deployed to South Africa to assist in the formation of the new South African Defence Force. This is Huw Lawford’s story of the most difficult and highly sensitive task involving integrating 7 armed forces comprising the ex-South African Defence Force, together with 4 former homeland armies and 2 liberation guerrilla armies of the African National Congress and Pan African Congress. There was no blueprint as nothing like this had ever been tried before. Huw expertly shows how this small team defused tensions and volatile situations which enabled the integration process to progress peacefully at a very politically sensitive time. He describes how blatant obstruction, provocation and resistance, from some quarters, was overcome. If this small team had failed then there would have been appalling consequences and a return to armed insurrection. It is a great success story and a great read.
Paul Davis CBE