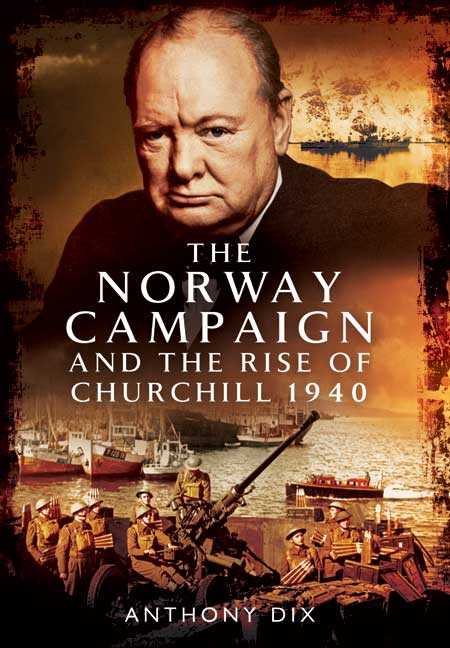 The Norway Campaign and the Rise of Churchill 1940 (Kindle)

Click here for help on how to download our eBooks
Add to Basket
Add to Wishlist
You'll be £4.99 closer to your next £10.00 credit when you purchase The Norway Campaign and the Rise of Churchill 1940. What's this?
Need a currency converter? Check XE.com for live rates

While the campaign in Norway from April to June 1940 was a depressing opening to active hostilities between Britain and Nazi Germany, it led directly to Churchill's war leadership and The Coalition. Both were to prove decisive in the long term.

This well researched work opens with a summary of the issues and personalities in British politics in the 1930s. The consequences of appeasement and failure to re-arm quickly became apparent in April 1940. The Royal Navy, which had been the defence priority, found itself seriously threatened by the Luftwaffe's control of the skies. The economies inflicted on the Army were all too obvious when faced by the Wehrmacht. Losses of men and equipment were serious and salutary.

As the Author describes, the campaign itself was fought in three phases: the landings in support of the Norwegians, the evacuation from Central Norway which led to Chamberlain's resignation and, finally, the campaign in the North which remained credible until the fall of France. At the same time he covers the political background and activity in London and cabinet in-fighting.

The Norway Campaign and the Rise of Churchill 1940, with its informed mix of politics and war fighting, provides a well informed and balanced overview of the opening campaign of the Second World War and its immediate and wider consequences.

As featured in the Dover Express, Folkestone Herald and Essence Magazine.


Would I recommend this book? Well, I guess that I would recommend it, because it gives insight to a rather unknown campaign of British forces, before fighting started head-on in the West. The writer has put much effort in making a complete overview of this campaign. That is worth a compliment. Photographs are of good quality, but the maps could be better. If you are interested in a book on a more unknown campaign of British forces in World War II, this book might be one to consider buying.

Don't be mislead by the sub-title. Although the Norway debate and the appointment of Churchill as Prime Minister do indeed get a chapter, they aren't a key part of the book, which focuses very much on the military campaign.

It's clear to see that ‘The Norway Campaign and the Rise of Churchill 1940’ has been extensively researched by author Anthony Dix. This book provides the reader with a fascinating insight into the events surrounding the opening chapter of World War Two...

... The book highlights the three phases of the Norway campaign; the deployment of troops in support of the Norwegians, the evacuation from central Norway and the campaign in the north. The author covers aspects of armed operations in Norway supported by concise details of the Tri Service units deployed in theatre and their effective roles within the campaign...

... A well-appointed appendix gives a good overview of the composition within the House of Commons in the late 1930's. Also included are notes on Scandinavian history, the relative Naval strength and Norwegian Navy and Military Intelligence. A comparison of losses during the campaign on both sides is listed. The appendix concludes with details about ‘Notraship’ (Norwegian Shipping and Trade Mission). The Norway Campaign and the Rise of Churchill 1940 is topped off with a very extensive bibliography providing source information for each chapter.

I found this book to be a really informative and enjoyable read. It provides a valuable insight into the dawn of World War Two and the events that surrounded the shaping of the Churchill’s war winning Government.

There is no doubt that the book is well-researched.

I really enjoyed this book. My background is in journalism, but without any particular knowledge of military history. I was reminded of an interview I once conducted as a foreign correspondent with General Mario Benjamín Menéndez the commander of Argentine forces on the Falklands or Malvinas Islands. I talked to him in late 1982, after British forces had recaptured the islands in a three-month campaign earlier that year. Why had the British succeeded, I asked him? His main argument was that British artillery had a longer range than Argentine artillery. “By the time your forces reached us we’d been pretty much blasted away” he said, or words to that effect. Of course there were plenty of other reasons for Argentina’s defeat (Menéndez himself was tainted by Argentina’s ‘dirty war”; he was later arrested on charges of violating human rights).

The comment stayed with me, and I was fascinated to see a comparable point being made in Anthony Dix’s absorbing account of the Norway campaign. Back in 1940 it was the Germans doing it to the British. As he puts it, “mortar batteries were in scarce supply… thus all the Germans had to do, as they advanced up the Gudbrandsdahl, was to sight their artillery just out of range of effective small arms fire and pulverise the British positions with impunity.” A large part of military success seems to boil down to having the right equipment in the right place at the right time. Wars can be won and lost by the planners and logistics people.

In Dix’s account, in Norway at the outset of the Second World War the British were sometimes very weak planners. With the benefit of decades of hindsight, communications and coordination were at times almost farcically bad. The author notes that in a number of cases carefully packed military equipment “was then unloaded or transhipped onto another vessel amid appalling confusion”. In one case an army unit was landed in Central Norway while its equipment was sent to North Norway.

The overall story of the Norway campaign as presented in the book is that British forces were ill-served by poor planning, coordination and intelligence as they went in to help the Norwegian government respond to German invasion. While Britain had ultimate naval superiority, on the ground the Allied troops (including French and Polish units) were at a clear disadvantage in terms of numbers and weapons. The Germans also had superiority in the air, and used air transport to get their troops into the right places quickly.

In some ways the Norway campaign seems to be a microcosm of Britain’s role in the wider Second World War, as well perhaps in a number of other conflicts. Initial mistakes, confusion, complacency; some woeful defeats; a degree of bloody-minded resolve in adversity; and finally the ability to learn lessons and move forward. “The Norway Campaign and the Rise of Churchill” tells of the defeats, the inconclusive stand-offs, and the Allied victories (such as in the naval battle at Narvik). It makes the point that after being pushed up into northern Norway, the Allies were in reality not defeated but had to be withdrawn to reinforce the home front as Germany advanced in France and forced evacuation through Dunkirk.

Dix shows that the Norway campaign was not just a side show. Although the Germans invaded to control iron supplies needed for their wider war effort, once there, they had to stay; up until 1945 its seems that Adolf Hitler feared the Allies might re-invade through Norway. This forced him to stretch out his limited defensive forces, weakened by Germany’s defeat in the Soviet Union. So in more ways than one Norway contributed to the eventual outcome of the wider war. Dix also makes the key political point that the defeats in Norway forced the collapse of the Neville Chamberlain government and the rise of Winston Churchill. As he puts it, because of the Norway debacle, “In May 1940 Parliament effectively surrendered its powers to a coalition government led by one stubborn old man who virtually established a dictatorship for the duration of the war”.

The author has examined the Norwegian campaign and the rise of Churchill, providing insight and balance. The text is readable and ably supported by illustrations, including well-chosen photo plates. The book will satisfy both those interested in WWII as a military conflict, but also provides social and political coverage that will appeal to a much wider readership. A very worthwhile and commended book.

Mr Dix's book aims to provide a balanced overview of this largely forgotten campaign, offering an exploration of the background politics alongside an in-depth discussion of military strategy and tactics. Dedicated to the author's father, it is a labour of love, which Mr Dix spent a decade researching. The thoroughness of his research makes it a useful resource for anyone wanting an introduction to this chapter of history.

Anthony Dix was born in Surrey. His National Service took him to East Africa before he became a stockbroker. He was engaged in local and national politics. His father fought in Norway in 1940. He lives near Epsom, Surrey.