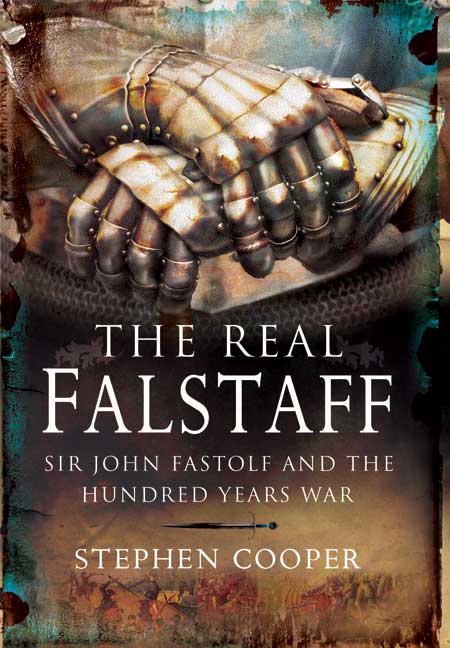 Click here for help on how to download our eBooks
Add to Basket
Add to Wishlist
You'll be £4.99 closer to your next £10.00 credit when you purchase The Real Falstaff. What's this?
Need a currency converter? Check XE.com for live rates

"That trunk of humours, that bolting-hutch of beastliness, that swollen parcel of dropsies, that huge bombard of sack, that stuffed cloak-bag of guts, that roasted Manningtree-ox with the pudding in his belly, that reverend vice, that grey iniquity, that father ruffian, that vanity in years... wherein is he good but to taste sack and drink it... wherein worthy but in nothing." Prince Hal on Falstaff (Henry IV Part I, Act II, Scene 4)

Sir John Fastolf was one of the most famous English knights and military commanders of the Hundred Years War, and is commonly thought to be a model for Sir John Falstaff, one of Shakespeare s greatest characters. This book examines the link in full. Most of Fastolf's life was spent fighting the French, and he lived long enough to witness both the triumphs of Henry V, and the disasters of the 1450s. He was one of the last representatives of generations of brave but often brutal English soldiers who made their careers and their fortunes waging war in France. His story and the story of declining English fortunes during the last phase of the war are the subject of Stephen Cooper's fascinating new study. He retraces the entire course of Fastolf s long life, but he concentrates on his many campaigns. A vivid picture of the old soldier emerges and of the French wars in which he played such a prominent part. But the author also explores Fastolf's legacy his connection to the Paston family, which is famous for the Paston letters, and the use Shakespeare made of Fastolf's name, career and character when he created Sir John Falstaff.

I would like to say that the book is highly accessible even to readers lacking in knowledge regarding the Hundred Years War. Stephen Cooper succeeds in elaborating on important terminology and events during and prior to Fastolf's life. Nonetheless, it would be advised for a reader unfamiliar with the period, to first a publication on the Hundred Years War as a whole to better contextualize and appreciate the subject at hand. For those who are already knowledgeable in regards to the period, this is a most useful case-study, John Fastolf serves as an excellent example of the way successful English knights lived, chased their ambitions and influenced the course of the war. It also shows the bitter and even tragic edge many of them probably acquired when their past glories were wasted by the actions of an incompetent king and equally incompetent advisors that slowly rose to the forefront after the death of Henry V,

Steohen Cooper explores the man behind the mischaracterization. In sum, Fastolf the adventurer and scholar seems a model English gentleman for his time. Cooper's scholarship has restored a personality fascinating in his own right and diametrically opposed to the infamous characters earlier portrayed on stage.

Cooper's scholarship has restored a personality fascinating in his own right and diametrically opposed to the infamous characters earlier portrayed on stage.

Stephen Cooper sets out to draw a clear distinction between the fat buffoon that is William Shakespeare's 'Sir John Falstaff'and the historical figure, 'Sir John Fastolf' on whom the former seems to have been based. He succeeds magnificently in a clear and well-resourced account of Fastolf's life set in the context of the later stages of the Hundred Years War in which the knight was a key player on the English side.

Biographies of the major English leaders abound: Henry V, John Talbot, earl of Shrewsbury, Richard, duke of York, for example, but it is rare to have such a detailed account of a mere knight such as Fastolf. Three good sources on his life and character make this possible: the survival of many of his papers and memoranda; the fact that he frequently featured in the rich collection fifteenth century letters and papers generated by the Paston family; the literary works that he patronised produced by members of his household such as Stephen Scrope and William Worcester.

Cooper could perhaps have laid a little more emphasis on the last source, especially on Fastolf's strange relationship with his stepson Scrope, but otherwise his use of the evidence is masterly. Fastolf's reputation was permanently blackened for his contemporaries by his defeat at the battle of Patay in 1429 but the author shows that his conduct there was part of one of his great military virtues, Prudence. Fastolf's strengths as a military commander lay in his care to protect English conquests
and to ensure that they were well supplied. As Cooper remarks it is no coincidence that his greatest victory, the battle of Rouvray in 1429 is known as 'the battle of the herrings'. This book is to be commended as a very good read.

This is the first biography of Sir John Fastolf. He bore no resemblance to Shakespeare’s comic Fastolf; this study reveals him as a soldier of great experience and strong views, a man who succeeded in making money in the difficult closing years of the Hundred Years War, an astute businessman with his own fleet, who managed his estates with skill.

Sir John Fastolf’s character and career bore no resemblance to Shakespeare’s ludicrous fat Falstaff. This fine study reveals him as a soldier of great experience, who thought hard about how to rescue the position of the English in the later stages of the Hundred Years War. He was a shrewd businessman, who made a fortune from the war and invested it wisely in land and trade. This book draws on a wide range of sources, in order to set Fastolf’s career in the full context of fifteenth century war, politics and society.

This fine book is the first biography of one of the major figures of the latter years of the Hundred Years War. Sir John Fastolf did not have the most glittering of military careers; he was unfortunate to miss out on the English triumph at Agincourt in 1415, and bore some of the blame for the defeat at Patay in 1429. Yet he was a thoughtful soldier, with strong views on the strategy that should be adopted. Despite the English failures in France, he succeeded in making money from the war, and showed himself to be a shrewd businessman, investing wisely in land and trade. This study, which draws on a wide range of sources, shows the real Fastolf as very different from the ludicrous fat Falstaff of Shakespeare’s imagination.

Stephen Cooper’s survey of the life of the career soldier and land owner Sir John Fastolf (1380-1459) is a very welcome publication. There has long been a need for a modern, well-informed but elegant and accessible book on this enthralling and important man, and that is exactly what Mr Cooper gives us. He writes clearly and engagingly, with a keen eye for the vivid detail or quotation. Although he has delved deeply into the scholarly literature and archive sources for Fastolf’s life and is well acquainted with the historical background of the Hundred Years War and late medieval England, his his account is always lively and approachable. By any standards, this is a good and stimulating read, whether for the academic specialist or for the interested general reader.
Fastolf has always been, and indeed remains, a controversial figure. In his own lifetime there were accusations of cowardice on the field of battle at Patay in France in 1429 and of treasonable intentions towards Henry VI in England during the early 1450s. His adoption by Shakespeare in the guise of Falstaff has complicated our understanding of his real as opposed to fictional character over the last four centuries. The discovery by scholars in the last sixty or seventy years of the surprising extent and scope of archival evidence of his life and interests has, however, much enriched our factual knowledge of the real Fastolf. Yet at the same time it has also helped to fuel scholarly debate. Did England profit or lose by its engagement in the Hundred Years War? Was Fastolf an avaricious and unscrupulous individual who exploited war , the law and his fellow men for his own personal gain; or was he a man of sincere piety and genuine cultural aspirations who encouraged scholars and inspired devoted loyalty? Was Fastolf tyrannised over by the corrupt regime of the Duke of Suffolk in East Anglia after 1437 or was he, on his return from the wars in France, merely a neglected outsider in his own homeland? These are important, though difficult, questions. It is a merit of Mr Cooper’s book that he weighs up such problems lucidly and judiciously without ever awkwardly interrupting the brisk, energetic narrative of Fastolf’s exciting life and times, with which he presents us.
One of the many enjoyable facets of the book is the author’s willingness to range widely in search of illuminating episodes with which to enliven his story. For instance, he makes a compelling case for the adolescent Fastolf having travelled with Bolingbroke to Prussia and thereafter on pilgrimage to Jerusalem during 1392-93; and he reminds us that the mature Fastolf was entrusted by the Duke of Bedford with an important diplomatic mission to the conference at Auxerre in 1432. In the course of a valuable discussion of the engagement fought by Fastolf at Rouvray in 1429 (‘the Battle of the Herrings’), a persuasive argument is articulated for relocating the site of the battle from Rouvray-Saint-Denis to Rouvray-Sainte-Croix. This suggestion much enhances our appreciation of the nature and significance of that battle and I have no doubt that it will be widely discussed by military historians. There is also an insightful short chapter about Fastolf’s patronage of those of his contemporaries who were historians writing accounts of the very war in which he had fought; for there was more than one sense in which this exceptional and complex Norfolk man contributed to making history!
As readers familiar with Pen & Sword Military’s publications have come to expect, the heart of the book is a soldier’s life that gives full and reliable coverage of both Fastolf’s career and the tactical, strategic, political and diplomatic factors that had a direct bearing on it. His estates, finances, family situation, cultural and religious interests are illuminatingly surveyed, though at rather less length. So, all in all, this excellent work is a pleasure to read. As an object, too, the book is attractively produced, with an agreeable typeface and helpful, well presented endnotes and bibliography. It deserves to be widely appreciated.

His persona is known to millions through the works of Shakespeare. Sir John Falstaff is a large, roguish man - a figure of farce in The Merry Wives of Windsor. Yet the real Sir John Fastolf was worlds apart from Shakespeare's creation, and it's a point that author Stephen Cooper proves comprehensively in his latest book. In his book, The Real Falstaff, Stephen retraces the entire course of Fastolf's long life, painting a vivid picture of the old soldier, including his involvement with the Hundred Years War. Norfolk also played a considerable part in Fastolf's life and, consequently, there is much in the book that will interest lovers of the county, as well as those interested local and medieval history.