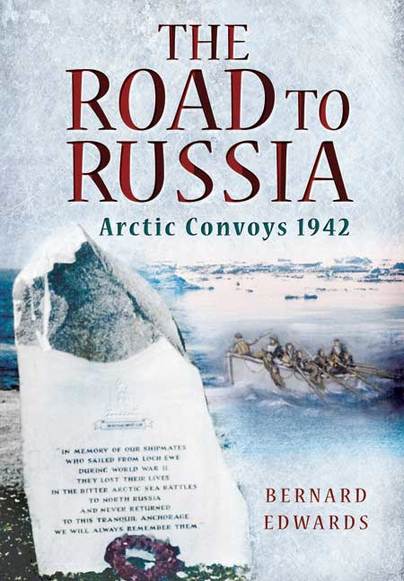 The Road To Russia (Paperback)

Add to Basket
Add to Wishlist
You'll be £12.99 closer to your next £10.00 credit when you purchase The Road To Russia. What's this?
+£4.50 UK Delivery or free UK delivery if order is over £40
(click here for international delivery rates)

During the Summer of 1942 Britain and America jointly agreed to supply desperately needed arms to Soviet Russia. The Germans were as determined to halt this potentially war-winning operation as the Allies were that it should succeed. The battleground could not have been more inhospitable than the appalling conditions of the Arctic sea. The British and American merchantmen and their gallant naval escorts suffered grievous losses. The cold was so intense that there were pitifully few survivors from the many vessels sunk in the running battles that raged. The book deals in detail with the fate of the convoys PQ13 and PQ 17, bound from Iceland to North Russia, and the Westbound convoy QP13. Attacked by aircraft and U-boats, PQ13 and PQ17 lost between them a total of thirty ships while QP13, untouched by the enemy, ran into a British minefield off Iceland with the loss of seven ships.

This is a well written book and I would highly recommend it to our readers.

Shiping Today and Yesterday May 2016

This book uncovers the stories of several Russian-bound convoys. With technical details about the ships, official reports from officers on the convoys and personal remembrances and stories from survivors it's a very pleasant book to read, event though some of the stories are quite sad yet heroic.

This book provides a much-commended account to remind us of an immense past maritime struggle.

Captain Edwards' book brings home the raw, awful harshness of this crucial campaign and the terrible price paid by the men of the Merchant Navy and the Royal Navy to keep Russia supplied.

A fine book and an important historical record.

With battle raging across much of Europe, the Second World War is perhaps one of the best documented periods in world history. Fresh perspective of the time can be hard to come by, so it's a testament to Bernard Edwards that he's been able to shine new light on one of the war's most compelling maritime stories.

Exploring the fates of Convoys PQ13 and PQ17 - both sailing from Iceland to Northern Russia as well as the westbound Convoy QP13 - The Road to Russia is a fact-filled account of the events taking place in some of Europe's northernmost seas.

The book centres on the events of the summer 1942. With Soviet Russia struggling to hold off Hitler's invasion, Britain and the United States agreed to send supplies to bolster their diminishing resources. Giving the view from the ships' decks and bridges it puts the reader into the pulse-raising viewpoint of those who had to be constantly on guard from the often unseen threat posed by German U-boats and aircraft.

With 37 years' of experience at sea in the Merchant Navy, Captain Edwards uses the full breadth of his maritime knowledge to outline the dangers, and pitfalls that were awaiting the crews of the ships making these perilous journeys. Through clever penmanship as well as providing a host of intriguing imagery, Captain Edwards paints a vivid picture of the time.

This is a well-researched and gripping account that provides a 200-page glimpse into the extreme hardships and tragedies that befell the men of the Merchant Navy of the time. The often gritty subject, while not easy to read, is hard to put down and gives a well-rounded account of those who put their lives on the line.

In 1942 the waters of Hvalifiord in Iceland hosted convoys departing to and returning from Russia: its shores were lined with tents and Nissan huts occupied by navy and army personnel. Nothing remains: only books such as this one keep alive the story of the men who suffered so much to take supplies to a far from grateful Soviet Union...

... Bernard Edwards, an ex-ship's master, writes so well and so sympathetically, that it feels a privilege to read about the courage and endurance of these brave men.

This is the story of the Arctic convoys to Russia in 1942, with a particular focus on the disastrous PQ17 and its opposite number QP13...

The first half of the book sets the strategic scene as Stalin switches from enthusiastic supplier of war material to Hitler to desperate pleader for the same from us. It being vital to keep him in the war, and Hitler from Stalin’s and ultimately the Iranian oil fields, we set about shipping tanks, aircraft, ammunition and other things to Murmansk. The first convoy to take a real beating was PQ13 and we are given a detailed account of its vicissitudes and those of its equivalent return convoy QP10, particularly from the standpoint of the hapless merchantmen and their masters and crews which Edwards understands so well.

The second half of the book focuses on the ill-fated PQ 17 and its equivalent return convoy QP13, which blundered into a ‘friendly’ minefield. The former’s battles against weather, U-boats and aircraft take us to the critical point of its being ordered by the First Sea Lord to ‘scatter’ because of a supposed surface threat from Tirpitz...

There have been other books about the Arctic convoys. The value of this one lies in its vivid, detailed accounts of just how ghastly the experience was for the merchant seamen involved.

The author describes in gripping detail the story of the Arctic convoys to Russia.

This soft-cover book covers in detail three convoys between the UK and Russia... The author has made an excellent job of telling the stories, not just of the overall convoys but of the individual ships and in many cases, those of the individual people as well... This is a well written and interesting insight into the conditions that were faced by so many allied merchant seamen.