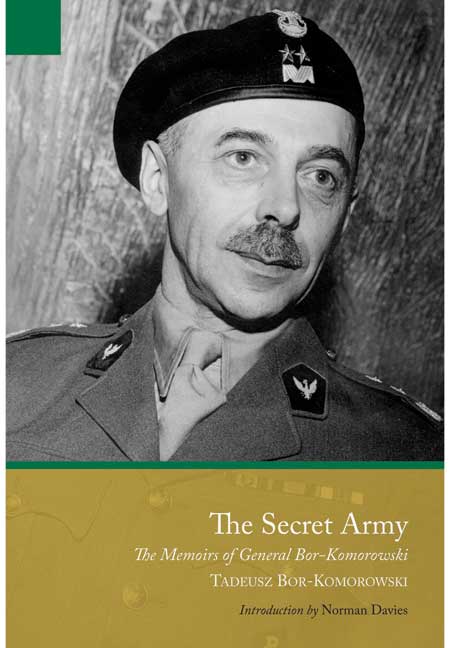 The Memoirs of General Bór-Komorowski

Click here for help on how to download our eBooks
Add to Basket
Add to Wishlist
You'll be £4.99 closer to your next £10.00 credit when you purchase The Secret Army. What's this?
Need a currency converter? Check XE.com for live rates

Tadeusz Komorowski was born in 1895 in Galicia, a region then ruled by the Austrians, and he served in the Austro-Hungarian Army in the First World War. Poland regained its independence in 1918, and Komorowski fought against the Russians in the Polish-Soviet War of 1919–21.

When Germany invaded Poland in 1939, Komorowski was the commander of units defending the Vistula River, but he was pushed eastwards by the fierce advance. Despite being surrounded by German forces, he escaped to Cracow. Although he planned to escape to the West, he was ordered to stay and start a resistance movement. He stayed in Cracow until the summer of 1941, when he sent to Warsaw. The legend of 'Bór' was about to begin.

Komorowski was appointed to lead the Home Army in June 1943. The Polish Resistance carried out sabotage and vital intelligence for the Allies, but their main task was to prepare for an uprising when the Nazis were in retreat to help liberate the country. The Polish Government-in-Exile gave the order to commence on 1 August 1944. Tragically, Stalin had plans for Poland after the war: Soviet troops sat outside Warsaw and left the Poles to their fate. The Resistance lasted, incredibly, 63 days. Komorowski was sentenced to death by Hitler, but the order was rescinded. The tale of Bór and the Uprising is the story of a proud nation and their fight against enemies and betrayal by allies.

The most compelling part of this book deals with the fighting in Warsaw, a battle that lasted for sixty-three days. We see the fighting from Bor-Komorowski's point of view, so share the problems he had communicating with isolated parts of the city, the desperate journeys through sewer tunnels, and the heartbreak as the Soviet guns remained silent for week after week. This is the core of the book, and makes it one of the most valuable memoirs to emerge from the Second World War, an absolute classic and highly recommended.