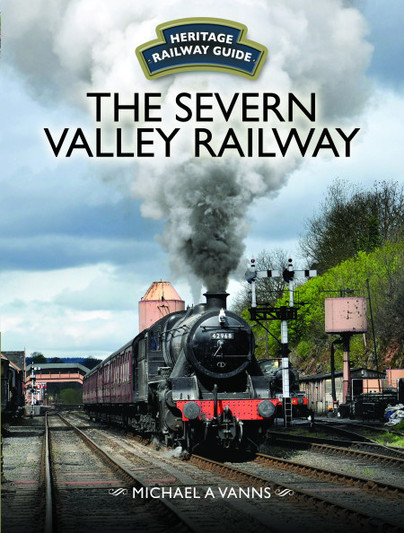 Click here for help on how to download our eBooks
Add to Basket
Add to Wishlist
You'll be £8.00 closer to your next £10.00 credit when you purchase The Severn Valley Railway. What's this?
Need a currency converter? Check XE.com for live rates

Worcestershire and Shropshire are neighbours and for 101 years until 1963 it was possible to travel by train between the two county towns of Worcester and Shrewsbury. For much of the journey, passengers would have been within sight of the River Severn, and it was a company deriving its title from that river that constructed the stretch of railway between Hartlebury and Shrewsbury at the end of the 1850s. This Severn Valley Railway was taken over by the West Midland Railway before the line opened, and a little over a year and a half later it became part of the Great Western Railway (GWR). That company ran it for almost eighty-five years until all the country’s railways were nationalised in 1948. British Railways continued to run trains over the whole route for another fifteen years before abandoning the section north from Bewdley to Shrewsbury. Fortunately, a new Severn Valley Railway company was formed by railway enthusiasts and by 1984 they were running steam-hauled trains between Kidderminster and Bridgnorth, having created one of the nation’s most popular heritage attractions.

This book provides a brief history of the Severn Valley Railway from its earliest days through to the twenty-first century, providing a guide for all those who love the sight and sound of steam engines making their way through a particularly beautiful part of the Midlands landscape.

On first seeing this title it could be assumed that this book purely covers the present heritage line. This is not so as the author covers the history of what was conceived in the 1800s and subsequent history to date.
Each chapter is fully supported by detailed text and well chosen black and white photographs many of historical interest, particularly of the colliery connections and industry beyond Bridgnorth.

This is my second approach to a Heritage Railway Guide series book, and I hope it will not be the last. I have to say that they are some books very spoiled by the publisher.

The quality of the paper, the interior design, the photography, the theme and in general the whole book itself, make it an ideal candidate for any library that deserves its own. I love.

here are so many heritage railways in the UK now - it seems that steam railway travel is becoming alost as popular now as it was during its heyday. This superb book reveals the Severn Valley Railway in all its glory - I can't argue as to its being the finest; we have our own North Norfolk Railway here in Sheringham, and the trains are always, without exception, crowded, and they have started to regularly cross the road to the mainline. This book is a reminder of how things used to be, and how many people would like them to be once more. Stunning!

The matter of maps notwithstanding, the combination of information and photographs is such that this book could well become an authoritative volume on its subject. While definitely a ‘souvenir’ volume; suitable for taking home after a visit to the SVR, it also has value as a provider of historical and social information for those interested in such matters. Railway modellers and members of the railway enthusiast community may also find it worthy of their attention.