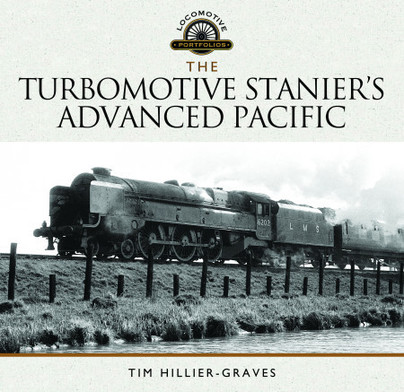 'I cannot recommend this book more highly. Thank goodness someone with the author's insight, ability and resource has laid out so clearly, a story that has fascinated me and many others since childhood! Thank you Tim-Hillier-Graves and Pen & Sword!' - Richard Gibbon, Friends of the National Railway Museum

You'll be £10.00 closer to your next £10.00 credit when you purchase The Turbomotive: Stanier's Advanced Pacific. What's this?
Need a currency converter? Check XE.com for live rates

Turbomotive was unique in Britain's railway history, and an experimental engine that proved successful but came too late to effect the direction of steam development or deflect the onset of diesel and electric locomotives. It was the brainchild of two of the most influential engineers of the twentieth century William Stanier of the LMS and Henry Guy of Metropolitan Vickers. They hoped that turbine power, which had already revolutionised ships propulsion and power stations, would do the same for the railways.

When Turbomotive appeared in 1935, she became a PR phenomenon at a time when commercial rivalry between the LMS and the LNER was reaching its height. Its launch at Euston in June was accompanied by a great fanfare and much publicity. Such was the interest in this 'revolutionary' idea that the engine would attract attention all her life.

Although producing good but not remarkable performances, she remained in service, plying her trade between London and Liverpool for longer than anyone predicted. Most expected a quick rebuild to conventional form, but the coming of war and lack of resources meant that she carried on until 1950 in turbine form.

Inevitably, change came when maintenance costs seemed likely to escalate and re-building seemed unavoidable. She re-appeared in August 1952, part Princess and part Coronation, but her new life was cut short by the disaster at Harrow in October. Although many thought her repairable, she was scrapped to make way for another 'experimental' steam engine.

This book presents the compulsive and fascinating story of this remarkable locomotive, drawn from a wide variety of sources, many previously untapped and unpublished, including memories of the designers, the crew who drove her, accountants and hard-headed business men, PR teams, the press, the passengers and many more.


I cannot recommend this book more highly. Thank goodness someone with the author's insight, ability and resource has laid out so clearly, a story that has fascinated me and many others since childhood! Thank you Tim-Hillier-Graves and Pen & Sword!

A curious and interesting book and as usual visually pampered, it will delight the lovers of the railways.

This reviewer found this volume to be both informative and well-written...

This volume is likely to appeal to several different groups. These could include devotees of the LMS and those with an interest in both British Railways (the LMS successor) specifically, and British rail transport in general. Railway modellers and artists interested in ‘trains’ are likely to find the images and diagrams informative. Transport historians interested in British transport history and the machines that were employed could also find it worthy of their attention. Engineers with an interest in turbines and turbine development vis-à-vis rail transportation might also find the volume of interest.