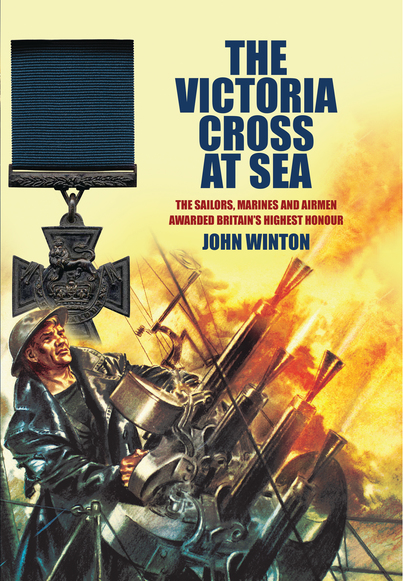 The Victoria Cross at Sea (Kindle)

Click here for help on how to download our eBooks
Add to Basket
Add to Wishlist
You'll be £4.99 closer to your next £10.00 credit when you purchase The Victoria Cross at Sea. What's this?
Need a currency converter? Check XE.com for live rates

Naval VCs have been won in places as far apart in time and distance as the Baltic in 1854 and Japan in 1945, in the trenches from the Crimea to the Western Front, in harbours from Dar es Salaam to Zeebrugge, from the Barents to the Java Sea, from New Zealand to the North Atlantic, and from China to the Channel.

They have been won in battleships and trawlers, in submarines below the water and aircraft above it, on horseback and on foot.

Age and rank meant nothing. Boy Cornwell was not seventeen at Jutland, and Frederick Parslow was in his sixtieth year when he earned his VC on board a horse transport ship. William Hall was the son of a freed slave; Charles Lucas, awarded the Royal Navy’s first VC, became a Rear Admiral.

Neither were all the recipients of Britain’s highest gallantry decoration British, and men from Canada, Australia and New Zealand were included in those whose actions were recognised by the awarding of the VC. Yet every one of them had one thing in common – uncommon valour.

There is a danger that an account of so many acts of gallantry can reduce them to something of a commonplace occurrence. But this problem is reduced by the vivid description of each in the very readable style found in all of the late John Winton's books. Each action is accompanied by a lifetime biography of the recipient, and in several cases the most interesting part comes afterwards, when holders found it difficult to live with the celebrity status which sometimes accompanied the award.

First published in 1978 and out of print for some years here is a most welcome reprint.

The Cape Horner No69

John Winton was born in London in 1931. He joined the Royal Navy in 1949, serving throughout the Korean War and the Suez Crisis. He retired as a lieutenant commander in 1963. As well as publishing a number of novels, he also wrote widely on the history of the Royal Navy and was an obituarist for the Daily Telegraph. He died in April 2001.