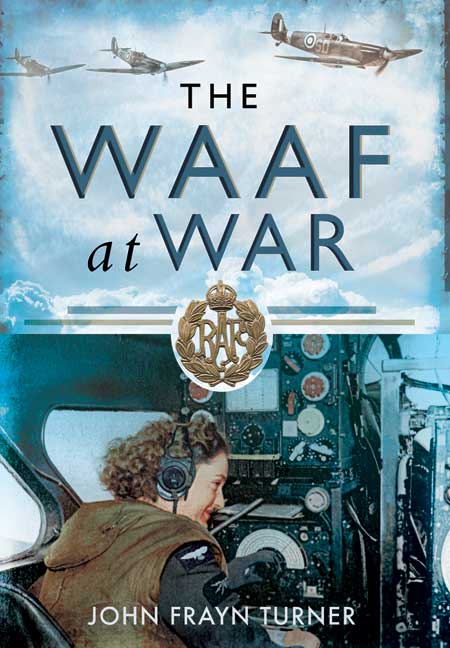 The WAAF At War (Kindle)

Click here for help on how to download our eBooks
Add to Basket
Add to Wishlist
You'll be £4.99 closer to your next £10.00 credit when you purchase The WAAF At War. What's this?
Need a currency converter? Check XE.com for live rates

Members of the Women's Auxiliary Air Force played a vital role in supporting the operations of the Royal Air Force during the Battle of Britain and thereafter but their story has not received the attention it deserves.

In The WAAF at War, highly experienced author John Frayn Turner has addressed this serious oversight by capturing the indomitable spirit of the thousands of young
women who made up the WAAF. He vividly describes the diverse roles played by members of this highly respected organization, both on the ground at air stations and in control bunkers, reading radar monitors or plotting the course of air operations.

In addition WAAF pilots were released to the Air Transport Auxiliary to deliver aircraft to front line units and flew all types of aircraft, often with minimal training, regardless of weather. Their adventures make for excellent reading.

Most poignant are the hazardous exploits of those WAAF who volunteered for SOE. Perhaps the best known of these incredibly gallant girls is Noor Inayat-Khan GC who was executed at Dachau in 1944 but there were many others whose stories are told here.

A long overdue tribute to the courage and war-winning contribution of all its members, The WAAF at War will appeal particularly to air historians and those who were members of or are proud to be descended from members of the WAAF.

Established in 1939, the WAAF grew from about 1,700 members at the outbreak of war to approximately 180,000 by 1943 – by when over 2,000 women were enlistig per week. WAAFs a vital part of maintaining the capability of the RAF, served in fifteen types of duty.

With this book, John Frayn Turner provides a tribute to the courage and contribution of all WAAFs.

n a lesser known story about the Second World War, The WAAF at War tells the story of the thousands of women who did there part and went above and beyond the call of duty. The WAAF at War addresses the serious oversight in military history about the women who served in the RAF and the part they played in keeping the RAF running during the end of the First World War and the entire Second World War. The Women in the WAAF served in hundreds of different positions during the wars ranging from the stereotypical roles of the 40's, such as cooks and typists, to the less conventional roles such as piloting aircraft and delivering aircraft to the front line with little training and in any weather conditions. The book focuses around the key events and people involved in the war such as the WAAF role in the Battle of Britain and the story of courageous women such as Noor Inayat Khan. The book and the women's adventures make for excellent reading as Turner uses Interviews, photographs and a wide range of sources to show the different roles that the women played in the WAAF and the interesting and exciting adventures that took part during war in a long overdue tribute to the women serving in the armed forces. Although no stranger to aviation history Turner gives an interesting and accessible account of women at war and the history of both the WAAF and the RAF showing a side of the war where women not only succeeded, they excelled.