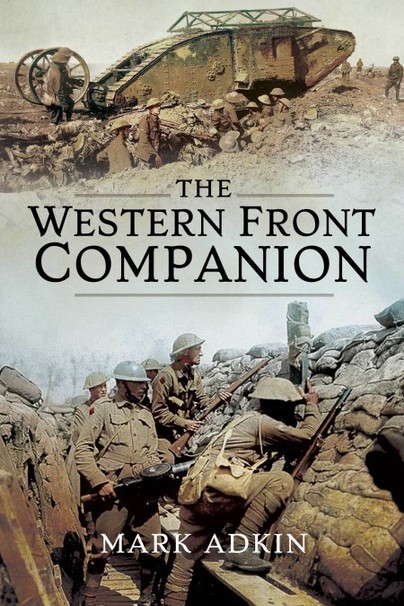 Click here for help on how to download our eBooks
Add to Basket
Add to Wishlist
You'll be £4.99 closer to your next £10.00 credit when you purchase The Western Front Companion. What's this?
Need a currency converter? Check XE.com for live rates

To comprehend and chronicle the sheer scale of the conflict on the Western Front demands a book of similar scope. Now, published for the centenary of the start of World War I in August 2014, here is that book. Written by the author of the three previous bestselling Companions on Waterloo, Trafalgar and Gettysburg – now acclaimed as the definitive work of reference on each battle – The Western Front Companion is not a mere chronological account of the fighting. Rather, it is an astonishingly comprehensive and forensic anatomy of how and why the armies fought, of their weapons, equipment and tactics, for over four long and bloody years on a battlefield that stretched from the Belgian coast to the Swiss frontier – a distance of 450 miles. Alongside the British Army, full coverage is given to Britain’s allies – France, Belgium, Australia, New Zealand, Canada, South Africa, India and the United States – as well as the Germans.

The 350,000 words of text range over everything from the railways on the front to the medical corps and the chaplains. An introduction explaining why the world went to war is followed by a year-by-year enumeration of the critical events and battles and then sections examining all branches of the armies, including commanders, staff, infantry, artillery, cavalry, engineers, supply and transport, veterinary, tanks and aviation, followed by one on trench warfare and another on the pivotal Battle of Cambrai with its massed use of tanks. Information boxes throughout cover further aspects, from valiant winners of the VC to the unique squalor of front-line trench life. An epilogue on the Armistice and the cost of the war tells how the Unknown Warrior was selected and buried in Westminster Abbey. Like previous Companions, this book is equally distinguished by its magnificent visual resources, and above all its plethora of original and intricate maps and diagrams, all in full colour, illustrating particular offensives, battles, raids or tactics, the configurations of trench formations or the trajectory of mortar bombardments. But this conflict was also the first to be chronicled from the start by photography, and The Western Front Companion does it full justice, with over 200 resonant and remarkable archive images from the time, many rarely seen. These are complemented with modern colour photographs showing how historic battlefields look nowadays, and paying tribute to the magnificent and poignant cemeteries, monuments and ossuaries that mark the fallen for today’s battlefield visitor. Every reader, no matter how well informed already on the history of World War I, will learn something new from this extraordinary and exhaustive volume. No one interested in the true story and sheer sweep of the Great War on the Western Front can afford to be without it.