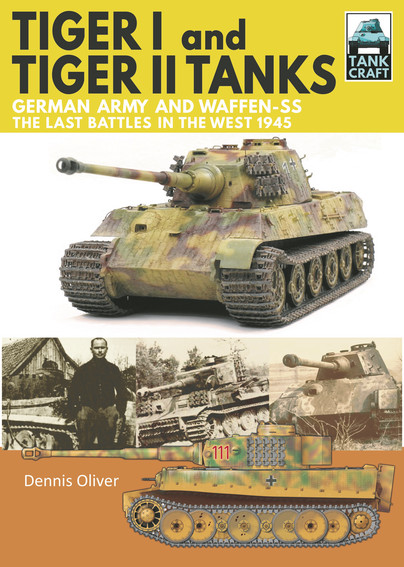 Tiger I and Tiger II Tanks, German Army and Waffen-SS, The Last Battles in the West, 1945 (Kindle)

Add to Basket
You'll be £4.99 closer to your next £10.00 credit when you purchase Tiger I and Tiger II Tanks, German Army and Waffen-SS, The Last Battles in the West, 1945. What's this?
Need a currency converter? Check XE.com for live rates

Tiger tanks were among the most-feared fighting vehicles of the Second World War and they gained almost legendary status, yet they never fulfilled their potential because they were not produced in sufficient numbers and the tide the war had turned against the German army by the time they were introduced. Often they were deployed in difficult circumstances and in defensive battles, struggling against the odds. Nowhere was this more true than in western Europe during the Allied advance across France and into Germany, and it is the Tigers of this phase of the war that Dennis Oliver portrays in his third volume on the Tiger in the TankCraft series.

He uses archive photos and extensively researched colour illustrations to examine the Tiger tanks and units of the German Army and Waffen-SS heavy panzer battalions that struggled to resist the onslaught of Allied armour and air attacks during the last days of the conflict.

Overall, a volume worth having is you are interested in either the vehicle or the period. Purists will note that the theatre of operations is a bit flexible – some images from Hungary find their way into the selection, but this actually adds value (as they help the author to make specific points).

Excellent publication which I wholeheartedly recommend.

A great reference for enthusiasts and modellers of the Tiger Tank. The historical part of this book covers the final few months on the Western Front, while the modelling sections cover most of the rest.

There is, off cause, a mention of the infamous Airfix Tiger kit even though it is not on the same plain as some of the other kits on offer. The reviews are well written and honest.

This book packs a lot of information from a relatively short time in history.

This is another of the series of Tank Craft books which aims to provide model-makers and enthusiasts with photographs and line drawings of battle tanks which are popular subjects for modelling.

The 64 page , large format book has many such images, as well as notes about the military actions, as far as is known, of the German Tiger tanks in 1945.

The illustrations are of the tank exteriors only. They are detailed, colour and of high quality.

Tiger Tank modellers and illustrators will love it.

Gamers and historical enthusiasts will enjoy a timeline of actions in which Tigers were involved in 1945, as well as short operational histories of Tiger units engaged in the last months of the war. The book also includes unit organizations.

This is a slim volume, but packed full of information for modelers and gamers interested in the Tiger I and Tiger II tanks in the last months of the war.

Dennis Oliver has tackled a very difficult subject with this book, and I commend his efforts for taking it on within the space afforded him. It has to be remembered that there have been tomes written about the Tiger I and II, and so it is no small feat to have written this book within the confines of 64 pages and keeping an informative and enjoyable read.

An established authority on German armour this is his eighth contribution to the Tank Craft series published by Pen & Sword. It encompasses the death throes of the retreating German Tiger forces through informed text, 32 b/w photos, a map showing battles with a running chronology and 4 organization charts reflecting unit reorganization. Interesting to read of the individual units and how they forged on being constantly depleted. There are side drawings of the four production versions of the Tiger II b, with salient points differentiating between them with twenty-one b/w detail photos. For the scale model enthusiast there are twenty colour profiles reflecting vehicles enpictured in the text and 127 colour photos of scale models of various scales, details and manufacturers to include many after-market items. It’s quite well researched and well worth the RRP.

A book that will bring joy to those who want to know or begin to know the history of these powerful tanks, in an accessible and easy to consult volume. The photos and details help to orient in what is a very interesting topic both for the model (to which this book is targeted) but also for the simple impassioned of military history, tanks and military vehicles.

The amount of research that Oliver has put in is simply staggering, and the colour section in the middle are great for reference for wargamers, modellers and artists. Also included is a detailed breakdown of the best model kits out there for the Tiger I and Tiger II.

This book delivers an amazing amount of good Tiger illustrations and info - providing the tank researcher a very good overview of all Tiger units on the western front of 1945. You don't have to be an active modeller to appreciate the Tiger scale models and the excellent overview of available Tiger I and II scale models. In general - you get a lot for your money with this book.

Mr Oliver has a confident air, and a growing list of detail books on camo, machines etc. He writes well within the narrow field discussed... this has actually made me want to try & create something more tied to a real tank.

Book No 13 in the TankCraft series from Pen and Sword, and another in this series by author Dennis Oliver. The book follows the regular format for these TankCraft books and provide an excellent mix of historical background, technical details of the tanks themselves along with colour profiles, a showcase of expertly completed models and a survey of kits and accessories that are available on the market. Judging by the number of manufacturers who produce models of the Tiger I & II, modellers seem to have an unquenching demand for all of them... Another interesting addition to the series from Dennis, and with something to interest both the modeller and the armour historian.

The degree of detail such specialist publications go into is extraordinary. It's amazing how much interest in WWII there is, and how almost every nut and bolt of every individual Panzer can be traced and accounted for. Truly astonishing! The amount of resources available to us enthusiasts is terrific. And if this example is typical of Dennis Oliver's contributions to the field, he's a top drawer contributor to this embarrassment of riches.

I can only endorse the opinions of the other reviewers, that this is a book of staggering detail and offers significant information on the deployment and fate of Tiger tanks in 1945 in the Western theater.
Also incredible detail for modellers. Well worth the investment.
Michael McCarthy. Battlefield Guide.