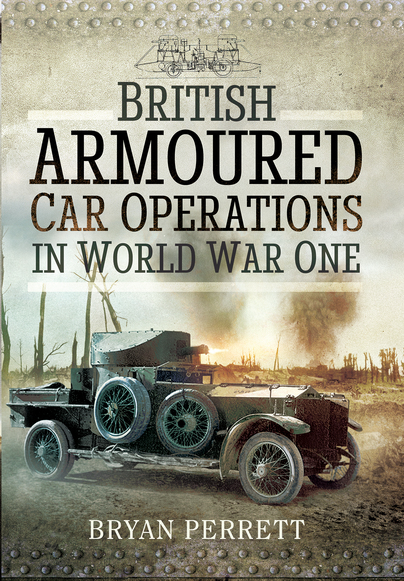 Add to Basket
Add to Wishlist
You'll be £19.99 closer to your next £10.00 credit when you purchase British Armoured Car Operations in World War I. What's this?
+£4.50 UK Delivery or free UK delivery if order is over £35
(click here for international delivery rates)

Readers have come to expect a level of detail and critical rigour from the established military historian and author Bryan Perrett. They will not be disappointed at all here by this new publication. Focussing predominantly on the British armoured car units of World War One, it also untangles many fascinating strands forming the history of modern warfare. Full of detail, it acquaints the reader with the complete history of the armoured car, from invention onwards, setting the history of its Great War service career firmly in context. Well written in an accessible style, this publication serves as an impressive tribute to the armoured car, one of the most effective weapons utilised by the allies during the course of the Great War.

A real eye-opener of a book which, I highly recommend to all armoured car enthusiasts.

It is indeed good to see a new book from the great Bryan Perrett in print. Bryan is co-author (with Anthony Lord) of ‘The Czar’s British Squadron’, a book that Pen & Sword should truly consider reprinting.

The research in this book is meticulous, covering such events as the adventures of Dunsterforce (you truly couldn’t make this up! An amazing tale!), the exploits of the marvellously named Locker Lampson, and the aforementioned Czar’s British squadron of armoured cars.

While the research is first class, the book is also written in an exciting, engaging style and truly would appeal to a wide audience.

The design and illustrations are particularly good, all in all, an excellent read.

Focussing predominantly on the British armoured car units of World War One, this book also untangles many fascinating strands forming the history of modern warfare. Full of detail, it acquaints the reader with the complete history of the armoured car, from invention onwards, setting the history of its Great War service career firmly in context. Well written in an accessible style, this publication serves as an impressive tribute to the armoured car, one of the most effective weapons utilised by the allies during the course of the Great War.

This is a well-written and very readable volume. It details the origins, development and operations of armoured cars used by British forces during World War I. A detailed background gives insight into the origins of the armoured-car genre. The majority of British armoured car operations during World War I occurred in obscure locations far removed from Europe and the Western Front. As a result, the reader is taken into Russia, the Balkans, Iran, the Levant and Africa; into small places and small wars. The relevant details are well-narrated. This reviewer found the chapters relating to the Russian / Balkan experiences of the British armoured car units particularly interesting, but was left with the impression that many of the non-British participants viewed the World War as being totally irrelevant to their own particular machinations. By their free-roaming, almost piratical nature, armoured cars attracted some interesting ‘personalities’. When these individuals make their appearance within the volume, they are treated with sympathy, although their foibles are not overlooked. The volume contains a selection of contemporary and informative photographs. Disappointingly, one of these (No.15) although notated as being ‘A rare coloured photograph…’, appears only in a monochrome format.

The book consists of 11 Chapters. Maps are provided. Photographic captions are placed alongside their respective images and also appear in a separate List of Plates section in the front of the volume. A Foreword relates the volume to a previously-published work by the author. A Bibliography and Index are provided. No Source Notes are provided for the various quotations appearing within the work.

This book is likely to appeal to a variety of readers. These could include military historians and those with a particular interest in land-based warfare and military vehicles. Military modellers specialising in World War I would probably find the photographs of use. It may also appeal to those who simply like an enjoyable read about an unusual subject.

This is an interesting story of the use of the early armoured cars by the British armed forces during WW1.

Bryan Perrett is a well-known and respected professional military historian. His style makes this book, which untangles the complex politics of the time, an easy read, full of fascinating anecdotes. Littered with flamboyant and often eccentric characters this is an essential source book for anyone interested in early armoured warfare. The centre of the book has a number of interesting photographs from the period. Highly recommended for military historians, military model makers, wargamers and anyone that has an interest in modern military warfare.

As far as the presentation of the book is concerned there is not much to find fault with, the book being up to the usual high standards of the publisher. It is hardbound and printed on good paper and the middle of the book has thirty-five high-quality b/w plates detailing scenes from the various theaters of operations covered in the book. There are also eight well produced maps at the beginning of the book which is s useful for locating the more geographically obscure places written about, particularly the Caucasus and the Danube Delta.

In all then, this is a very well written and engaging book with plenty of engaging material that will be a pleasure to read for anyone with an interest in military history.